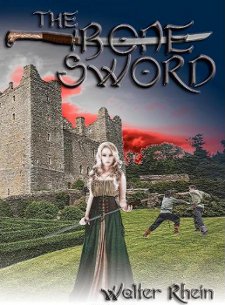 This isn’t Rhein’s first book, but his first with new imprint Rhemalda Publishing. My first impression of The Bone Sword, looking at the cover artwork, was a feeling of sinking doom. From the luridly coloured sky to the distorted, badly proportioned, and vastly over-photoshopped Renn-Faire blonde woman, none of it gave a good impression. Looking at the spine, the title and author’s name have been carefully placed so that they don’t stand out. The cover is credited to “Rhemalda Publishing”, which is quite fair enough; if I were the artist for this, I wouldn’t want to be credited either.

The blurb on the back is quite promising:

Malik emerges from the swamps of Plaiden seeking only shelter, food, and the time necessary to take the chill from his bones. But after a barroom brawl lands him in trouble with the local authorities, he flees to the mountains with two orphaned children who have the power to heal. Pursued by the vicious Father Ivory and his Nightshades, Malik and his charges become the centre of a grassroots movement that quickly blossoms into a full-fledged revolution. Their problems are compounded when news of their exploits draws the attention of Malik’s former Captain, a swordsman of legendary prowess who will not stop until Malik and his followers are dead. As the final battle approaches, Malik must face both his inner demons and his former master in a duel that will determine the fate of the free people of Miscony.

You’d think, with a blurb like that, that there must be much more inside. Sadly, that’s the entire plot; what you see there is what you’ve got. Still, the saying about judging a book by its cover is there for a reason, so I opened it up and prepared to be pleasantly surprised.

Unfortunately, I wasn’t. The first thing I saw was the Map, and it’s, er, quite traditional. Miscony is a forest land, bisected by the Old Road, the East Road, and the Ergeron River; the map also features the Northern Tribes, the Southern Kingdoms, and the Eastland Spires. The legend (a simple “Miscony”, in a standard black-letter font) and the compass rose would be perfectly unexceptionable if not for the absurdly overenthusiastic use of drop shadows, rendering them nigh-illegible. This isn’t the author’s fault any more than the cover is, of course, but it’s still rather unimpressive.

Turning to the text itself, on the first page we have foliage that glistens appreciatively and a protagonist who’s hot with fever while every part of his body is wet with cold. There’s a great, life-changing dilemma in front of him: should he go to the pub? (SPOILER: he does.) It turns out to contain lower-class men in homespun tunics, drinking mugs of foaming beer. Whilst I wouldn’t normally recommend literary criticism texts to a writer seeking to improve his craft, I think in this instance that Walter Rhein would benefit immensely from a close reading of Diana Wynne Jones’s Tough Guide to Fantasyland.

The tavern has a resident bully, and the resident bully has a couple of scantily dressed girls; Malik uses “protecting the honour of peasant women” as part of the reason to kill him, but of course he leaves immediately and then never thinks of them again. Unfortunately, the misogyny and classism shown here (“[T]he regulars immediately stopped their drunken antics and swivelled their fatty jowls to the entryway with the telegraphed interest of a less-than-intelligent dog.”) set the tone for the rest of the book, and the only purpose of this chapter is to show us Malik’s rash impulsiveness and the titular Bone Sword—the legendary weapon of the Camden Guard. Presumably, this sounds like a good fantasy name to the author, but as a Londoner I’m imagining patchouli-scented Guardsmen wearing platform boots and eyeliner.

The writing style is rather laboured and riddled with fantasy cliches, passive tenses, and ill-considered metaphors.

The achievement had startled Jasmine, for never before had she dared to test the strength of her powers. But after seeing the reaction of Gerard and the other men of Elmshearst, her spirit had been soothed. The healing of the elder had opened a floodgate, and Jasmine had labored long into the morning curing hundreds of ailments of all shapes and sizes.

Jasmine’s healing powers are the focus of the novel’s other plot strand; the Church considers them demonic in origin, and she has moral qualms about using them on people who will then be killed because they’re demon-tainted or who will go on to kill others. However, those are resolved (mostly by Malik) and she goes on to become the leader of an outright rebellion. Well, to be honest, she’s manipulated into it, as we see here with Malik talking her into becoming their innocent figurehead and potential scapegoat.


“A queen? I’m a peasant girl! I know nothing of these things!”
“Your heart is pure, Jasmine. Simply guide our swords.”
“We offer ourselves as your noble knights and servants. Do you accept our pledge?”
“What are you asking of me?”
“That you guide us and tell us where to strike, for we trust your judgement above our own. Shall we stop Father Ivory? Shall we stop these killings?”
“Yes.”
“Whatever the cost?”
“Yes.”
“Whatever the consequences?”
“Yes.”
“And you’re willing to bear the burden of this decision?”
“I am.”

The text, however, wants us to support and sympathise with the rebellion, and to admire her noble assumption of responsibility. In the end, the corrupt Earl dies, and Jasmine becomes Queen—but then again, generic mediaeval peasants are usually stuck with the feudal system even after the revolution. That may change if there’s a sequel—Jasmine does talk about the lack of real change at the end, but gets fobbed off with a pat answer by one of the ex-rebel leaders.

It’s a bit of a curate’s egg of a book, though; I was never in any danger of not finishing it, and not just because I didn’t want to miss the next nugget of appallingness. The plot is basic and entirely unoriginal, but serviceable and fairly well paced, and the themes the book poses (how much loyalty do you owe to an organization that doesn’t repay it? When do you have to take a stand?) are good ones. The Camden Guard, despite the name, are an interesting piece of worldbuilding, and it’s good to see a fantasy castle with garden features as well as fortifications—in this case, a hedge maze which plays quite an important role in the ending. It’s also good to see a protagonist of colour, though the name “Malik” and a reference to “long black hair” are the only indications we get.

I’d have liked to have seen more female characters and more agency given to them; I like Jasmine, but she’s dreadfully constrained and never gets to do anything for herself. I’d also have preferred a general expansion of the story, and some motivations for the characters beyond goodness, arrogance, or self-righteous religion. Mostly, however, I’d have liked a more thoughtful descriptive style, and much less reliance on lazy conventions in both setting and narrative.

Thanks for the review! I appreciate it! I'm glad that even though the book wasn't grabbing you, you kept with it to the end.

Hello, this is Walter Rhein again. I realize that you didn't particularly care for my novel "The Bone Sword" but I have a new book out and I was wondering if you'd like to look at it. It's called "The Reader of Acheron" and it was published with Perseid Press. Perseid is run by Janet Morris, who is famous for her contributions to the Thieves' World books. Please check out the current reviews for reader here: http://www.amazon.com/Reader-Acheron-Slaves-Erafor-ebook/dp/B00HS1532E/ref=sr_1_1?ie=UTF8&qid=1393532568&sr=8-1&keywords=walter+rhein+the+reader+of+acheron and if you're interested in reviewing this, just let me know!