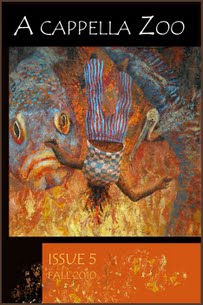 The vibrant orange and blue cover of this collection of stories and poems is a good reflection of the lively and multifarious contents. There are some beautifully written and powerful pieces of fiction and poems in this issue. According to the website, A cappella Zoo is a magazine of magic realism and slipstream with a strong literary slant that has been running since 2008. Editor Colin Meldrum’s interest in science fiction and mythology comes through strongly. Many of the stories feature animals: some fantastic birds, a herd of pigs, an enigmatic snake, a mute lake creature and an engaging Chilean sea blob. But what is wonderful about many of these stories is how the characters are obsessed with and subtly changed by these animals.

In Nancy Gold’s exquisite opening story, ‘Showtime’, bird wings sprout from the human protagonists and flight is a poignant metaphor for escape from the pain of reality. Gold’s intense drama of spoiled human desire is described with unsentimental directness. There is something sinister about the birds in Kate Riedel’s ‘Birds Every Child Should Know’, or at least about the way they appear and disappear. The story is inconclusive but this does not detract from its strangely powerful effect.

In Mike Meginnis’s ‘The Snake Charmer’s Teeth’, the snake creates a temporal and thematic link between two stories—that of a power-seeking snake charmer and that of a young girl suffering abuse by her father. The concept of the story is interesting but I was rather put off by the long strings of adjectives Meginnis uses and although the characters are well drawn the dialogue seems oddly unnatural. Meginnis gives his story an exotic setting but I found the lack of a specific cultural location frustrating. The author is fond of lines hinting at enigma such as: “Do not think this means what it does not mean.” But since the mystery of this line is never explained I was left feeling a little cheated. It’s a shame that the author knows so little of snake biology that his serpent has green blood.

In ‘Borges’ Bookstore’, David Misialowski takes the Argentinean writer’s idea of the infinitely expanding library to a chilling conclusion and evokes a dark labyrinthine setting for his tale of retribution and despair. The compulsive acquisition of books that is the nemesis of Misialowski’s character has its echoes in ‘The Collector of Van de Voys’ by Edmond Caldwell. This is one of the outstanding pieces of fiction in the magazine. From a deceptively prosaic beginning, the reader is pitched into a surreal nightmare that allows the imagination to solve the puzzle of its carefully arranged narrative clues and vivid imagery.

Benjamin Robinson’s ‘The Abandoned City’ works in a similar way on the reader’s imagination, pulling back from an overt explanation of its mysterious core. An ice-cream manufacturer invents a new brand of ice-cream, the flavours of which have a sinister origin. It is only the author’s skill in keeping the tone light and the dialogue snappy which prevents the story from having an extremely unpleasant after-taste, but it’s put me right off Raspberry Ripple.

Although less powerfully written, ‘Somewhere Near Gerasa’ by Alex Myers captures the crazed voice of the madman from the biblical parable in which the exorcised demons take possession of herd of pigs. Jason Jordan’s ‘Pestilence’ is chockfull of ideas and has a chirpy style though I found the story, about a block of flats visited by a series of unexplained physical phenomena, curiously uninvolving. The fact that the residents of the flats are known as One, Two, Three and Four doesn’t help me to feel interested in them as individuals. The story is narrated by one of the residents to a visiting reporter but this technique has the effect of distancing events still further. The daily plagues that haunt the occupants of the house hold no element of surprise for the narrator and this sense of acceptance kills off some of the story’s dramatic potential.

A story that worked much more effectively, due mainly to the beautifully described relationship between an aging couple, was Theodore Carter’s ‘The Life Story of a Chilean Sea Blob’ in which the blob in question acts as a metaphor for the change that engulfs the couple’s life. The author tells this story with a great deal of gentle humour and a wry sense of the absurd elements that make up long-term relationships. ‘The Creature from the Lake’ by Hayes Greenwood Moore works in a similar way—the eponymous creature, though more of a presence in the story than the blob, works mostly to illuminate the relationship between the human couple who adopt it. This was another excellently written piece.

Short but sweet is Tania Herschman’s ‘Einstein Plays Guitar’. Herschman displays a talent for immediacy of dialogue and the clinching detail that makes a piece of flash fiction work. ‘A Tale of a Snowy Night’ by Naoko Awa (translated by Toshiya Kamei) is a much slower story that unfolds in a dream-like sequence but leaves its magic unfulfilled, fading into an exquisitely expressed nothingness.

The best of the remaining stories was Phillip Neel’s ‘The Crushing’ which starts in a low key but quickly spirals into a thought-provoking and, at times, viscerally engaging indictment of modern consumer culture. Catherine Sharpe’s ‘Shades of Grey’ is a much more tightly-focussed human drama about a woman who receives mysterious messages on her mobile phone. The story captures some lovely details of everyday life and the small but keen suffering imposed by our relationship with technology. Melissa Ross’s ‘Movie Man’ is possibly the most innovative piece in the collection in terms of its lack of narrative structure and general weirdness. This was an odd and rather inaccessible piece for me.

The fiction in this collection is interspersed with some very fine poems: Feng Sun Chen’s ‘Eclipse’ evokes the numbness of bereavement with great economy and vivid imagery. Kristine Ong Muslim’s ‘Conrad’ series is a poignant mini-saga. ‘Sleepmaps’ by Barry Napier and ‘Antarctica’ by Amy DeBevoise address the current preoccupation with consumerism and the environment in startling dream-like images.

I was impressed too with the way some of the poems echoed the bird themes of the fiction. Of particular note was Charlene Logan Burnett’s ‘Circling of Cranes’: - It is said of the crane, if you ask him / he will carry across migratory oceans / smaller birds, the souls of the dead, a lost maiden folded between the scapulas of his wings.

I loved the surreal insect imagery of Travis Blankenship’s ‘Molesting the Legend’, even if the poem’s subject remained inaccessible to me. The language of Daniela Schonberg’s ‘Let This Be My Refuge’ is perhaps a little too rich but I found it hard to resist: how delicate your words / hung, framing your obsidian features / like long lappets of moon jellyfish, / the acoustic notes plucked to puncture.

Also effective were Lisa Groves’s ‘The Cat and the Fiddle’ and Anna Jaquiery’s ‘Fragmentation’. ‘:sign language:’ by Joseph A.W. Quintela was interesting in its use of layout and had some arresting phrases: dry prairie stretched like sprouted saran wrap, and cool as a radio-active cucumber. Nathaniel Taggart’s ‘How to Fall Down’ has a gently magical opening: The birds are unfixed furniture. Humming / wings spill ink on the canvas and a brutal ending. ‘What the Calf Daughter Knows’ by Rob Cook is an even more disturbing poem that delights in the reiteration of its carnivorous images. There was a possibility for this poem to convey its message in a subtly surreal way through a series of images but the poet seemed to want to render his message unambiguous: Then the teenagers emptied on the ground / a bag of what they called happy burgers. / They said I was a calf.

A capella Zoo is an engaging and beautifully-presented ‘zine which features some talented authors and poets. The mythological and science fiction preferences of the editor certainly lived up to my expectations of these genres. As for slipstream—with the exception of Melissa Ross’s ‘Movie Man’ and Phillip Neel’s ‘The Crushing’, the stories seem to aim more in the direction of the literary mainstream.

Buy this issue from A capella Zoo
Posted by Djibril at 12:04