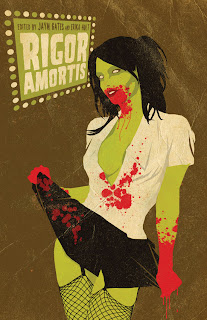 Sex and Death; do any two things more preoccupy the human condition? Sex makes us feel alive, it is instrumental in the creation of life itself. Death is our only certainty, our inevitable decay is only a matter of time and our control over it is miniscule at best. Perhaps we get to pick the where, when and how, but we never get a choice about the if.

In Rigor Amortis we have a book that is not really about sex and death. It’s more about sex and undeath. That crawling hunger we all feel replaced by another kind entirely. The lengths we might go to out of lonely desperation or simply the grief of a lost love, those stories are here too. Sometimes it’s gray-green flesh meeting pink or perhaps some straight-up zombie on zombie action. These are stories of loss, experimentation, and control. Genitals grind, teeth scrape on bone, and sometimes it’s happening all at the same time as strips of flesh slough away or are torn off in a passionate frenzy.

The book began as a Twitter joke by Gates and some of the authors, a commentary on the oversaturation of zombie-related fiction on the market. It took on a life of its own and soon Holt brought the collection to the attention of Absolute XPress, a direct-to-reader publisher known for a focus on genre books. The trip from Twitter to “real book” was a surprisingly short one and an interesting example of how different modern technology has made the writer’s struggle. The book itself is in four sections labeled Romance, Revenge, Risk and Raunch, and coming in at only 134 pages, it is a short and sweet collection of flash fiction. Most of the stories found here are no more than a page or two long making them easily, ahem, digested in a single sitting.

The Romance section contains stories such as ‘Til Death Do Our Parts’ by Kaolin Imago Fire (14) in which a freshly turned couple are intent to spend what little remaining time they have together in fiery passion. It is only a couple of pages but one gets the sense of urgency they both feel at their quickly deteriorating state as simple things become more and more difficult. As well as ‘Surrender’ by Xander Briggs (22), a quick tale of a woman trapped in her home by the ravening hordes and the now nearly mindless man she loved having just enough of his self left in his rotted skull to come looking for her.

Revenge contains stories of a more sinister nature, like ‘Love, Love (And Chains) Will Keep Us Together’ by R. Schuyler Devin (37) in which a man’s dream girl comes literally bursting into his apartment, infected and insane, and he does the only reasonable thing he can think of, hold her prisoner and use her as a squirming sex doll. The Revenge section contains the most examples of the human being the aggressor rather than the victim, and in the case of ‘Syd’s Turn’ by R. E. VanNewkirk (58), a powder procured from a local bokor leads to a new type of BDSM play in which a young couple take turns zombifying each other into sexual submission. Incensed over his treatment during his last zombification, the titular Syd takes his turn at being master too far for too long. As the rotting flesh sloughs off of his beloved it is then that you get the true horror of the situation, and it is a story about how sometimes when we give power over ourselves to others, we may find that they abuse it beyond return.

Risk is the section for experimentation, the section in which Michael Phillips dreams of surrendering to the zombie apocalypse in his prose poem ‘Waking Up Someone Who Isn’t Me’ (77). It is a place where a “Z-curious” girl can make a Craigslist hookup with the undead girl of her dreams (no maggots please) in Sarah Goslee’s ‘My Summer Romance’ (81). From one perspective it could be seen as the tale of a doomed romance, from another it is a cautionary yarn about the dangers of online predators. It is a tale of misguided exploration and restraint that ends as all summer romances must, in horrible bloodshed.

The final section, Raunch, is what its name implies. If you haven’t gotten your fill of squelching zombie genitalia by this point, this is the section for you. Your first stop is an undead sex club for a little gangbang action (don’t forget your penis!) in ‘Urbanites’ by Pete “Patch” Alberti (99). Afterward, make a stop in the restroom to tidy yourself up and maybe have a chance encounter with a beautiful stranger in V. R. Roadifer’s ‘Honey’ (109). We end the section and the anthology with ‘Cloudy With a Chance of Zombie Orgasm’ by Annette Dupree (119). It is a bizarre if somewhat clumsily titled piece about a sexually frustrated gun nut of a girl who finally finds the satisfaction she’s so longed for when an army of zombie lesbians show up at her doorstep wielding the ultimate love toys.

I’m just going to come right out and say it, I loved Rigor Amortis. Beginning to end and front to back. I have absolutely nothing really negative to say about it. The worst that can be said is that it is a book of zombie erotica, which has a certain squick factor that is certainly not for the squeamish, but it is well written squick for all of that.

It’s not just about sex and death, of course, but also about our relationships. It is about a longing to be together beyond the veil and how, given the opportunity, we can be overly cruel even to the ones we love. Especially to the ones we love. Our capacity to love is great, but our capacity to take advantage of even the most deleterious of situations can occlude it easily when we are put into a situation where the old rules no longer apply and the new rules barely exist if at all. Sometimes love is beautiful and sometimes it is rancid and festering and full of pain, but we hold onto it anyway. If these are the sort of stories that interest you, you could do far, far worse than this little anthology.

Thanks for this enthusiastic review, Don. (Full disclosure: I have a story, albeit not one mentioned in this review, in the Rigor Amortis anthology.) It's my sense that everything about this book, from the conception through to the writing, editing, publishing, publicizing and dissemination has been performed with this same sense of enthusiasm, of lively playfulness, and of fun. I've enjoyed reading almost every story in it, from the tragic to the silly, from the moving to the gross. So I just wanted to thank the reviewer for continuing this stream of enthusiastic and fun reaction to the project.

How utterly bonkers... sounds wonderful. Is there any reason why this doesn;t seem to be available on Amazon.co.uk? The link is dead and I have vouchers to blow!!

Huh, I thought I would've checked that before posting the link. It doesn't seem to be on sale in the UK now though. I guess you can still buy it and have it shipped from the US on an Amazon voucher? (Or even better, ask your local indie bookshop to get it in!)

I've checked with the publisher as to the status of UK distribution.

Basically, the book is currently available in indie bookstores, on the website, and on Amazon. Should we move to a second printing from Edge, RA will be available to UK distributors.

Rigor is also available from Smashwords as an ebook. http://www.smashwords.com/books/view/26541

At $2.99, this is definitely a better option than trying to get the hard copy from America!

Thank you so much for your interest, and I'm sorry it isn't available in the UK!