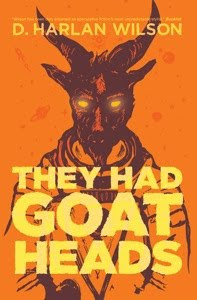 One of my favourite albums is Rain Dogs by the unique Tom Waits. From the first track you are transported into a dark, surreal, noir-ish universe of accordion-playing slaughterhouse workers, ships captained by one-eyed dwarves, a woman with a set of tear tattoos (one for every year he's away, she says) and the most menacing version of ‘The Rose of Tralee’ you are ever likely to hear. Why am I muttering about Tom Waits when I should be reviewing D. Harlan Wilson’s collection, They Had Goat Heads? Well, it’s because this book took me instantly into that dark, threatening, often incomprehensible, Waitsian world. In fact, I had the album’s songs spiralling through my head all the time I was reading the book.

They Had Goat Heads is best swallowed whole. A set of individual stories, vignettes, flash fictions and single-sentence narratives, it is by turns menacing, hilarious, eccentric, surreal and downright incomprehensible. Taken as a standard collection the book is difficult and a little too splintered to be fully appreciated, but as a complete work it is almost an epic poem of the absurd.

Kafka-esque enigmas litter the book, flavoured darkly with hints of menace. For example in ‘PO Box 455’, the narrator visits a post office and finds himself confronted by layers of ludicrous bureaucracy which include a visit to the Key Insertion Room, where keys are, well, inserted. Every so often a trapdoor slides open in the ceiling, then slides shut again, a touch of delicious menace that unnerves as well as puzzles. In fact this entire story could be read as a satire on the plethora of mostly unnecessary processes and procedures that control the modern world and end up achieving nothing other than the fulfilment of their own self-contained existence.

Two excellent stories provide interludes of Pythonesque humour. The first is ‘The Arrest’ in which a number of unnamed characters attempt to arrest each other with increasingly farcical violence. The story is told with great comedic energy and reminded me in many ways of the opening passages of Joseph Heller’s Something Happened (read it as well as this book and you’ll see what I mean). The second stand-out comedy was ‘The Storyteller’ in which the narrator is pursued and beaten down by a colleague who insists on telling him a story.

‘The Kerosene Lantern Tour’ is a further mix of humour and utter futility. A guided tour of a lantern is now in its 86th day and begins to fall apart as the tourist themselves engage in the most bizarre activities and the guides run out of things to say. ‘Strongmen and Motorcycles (and Monkeys Too)’ has one of he best first lines I have ever read, and it maybe it is true. ‘Balloon’ asks an interesting question about the nature of murder.

Lurking in the midst of all this insanity and mayhem is a graphic story called ‘The Sister’, illustrated with unnerving skill by Skye Thorstenson. This tale is an unsettling slice of very black humour and horror in which atrocity is piled on atrocity with a matter-of-factness that makes the darkness even more disturbing.

While we’re on the subject of illustration, the book’s cover art (the work of Brandon Duncan) is delightfully surreal and its orange brown and yellow colour-scheme gives it a distinctly pulp-feel—an irony in itself because pulp fiction this book is not.

The narrative style is simplistic yet complex, detailed descriptions of the strange, conversations, rituals and actions of the protagonists, reminiscent of a cross-eyed, cross-tempered Ben Turpin berating Laurel and Hardy with an angry “You gave to him and he gave to you and you gave to him, you’re all nuts!” Many of the stories have no obvious plot or direction, yet, as stated earlier, reading the book as a whole, complex work rather than a dip-in collection gives a sense of the absurdity of the world in which we live, the pointlessness of bureaucracy and, sadly, our own obsessions and actions, and the random nature of life itself.

Often infuriating and puzzling, but glorious anarchic, satisfyingly different and immensely rewarding, They Had Goat Heads is not an easy read, but then shouldn’t difficult be an essential part of our reading experience?

Buy this item from Atlatl Press
Posted by Djibril at 11:40