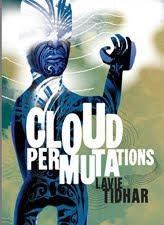 Cloud Permutations is a novella set on a planet called Heven with a magical South Seas setting. Kal is a boy who just wants to fly, but flying on Heven is tabu, against kastom, and carries a fatal penalty. A very young Kal is warned by his grandfather, ‘One should never speak lightly of clouds.’ Clouds are a mystical and powerful force in this world, ever present in the skies they inspire an almost religious awe and are regarded with respect and fear.

Kal and his friend Vira slip away from school to build a kite, named after the original ship, the Hilda Lini, that brought the people of Man Vanuatu to their new world. Here they have established a new society based on the culture of the world they left. Kastom is everything and traditions endure—like meeting in the nakamal in the shade of a nambanga tree brought from ‘Old Earth’, and the drinking of kava.


“But this, Kal thought, was not Earth. This was Heven. It was a new world, his world and he would not bow down to kastom. He wanted—desired—to fly. And flying had been forbidden by kastom.”

Kal and Vira rebel against this tabu, and the retribution is immediate. Vira falls from the sky and Kal is exiled from his home island Epi to the floating island of Tanna. The decision to exile Kal is taken more in sorrow than in anger—‘those who live in the sky have been offended’ and so Kal must leave. Arriving at the floating island of Tanna he is greeted by the mysterious Moli Solomon, ‘wan woman blong wotadroing’ and learns there is a dark tower in his future.

“It waited for Kal. It had waited for a long time. How long, perhaps, only the clouds really knew.”

So Kal becomes the boy of the prophecy, meets a new friend, Bani Voko Voko Leo, ‘a thief by reasons of ideology’, who has his own prophecy to fulfil. Bani invites Kal to join him on a ‘small trip’—possibly the most casual invitation to a quest since Bilbo Baggins rushed headlong out of Bag End without a handkerchief. Kal sets sail from Naetsaed on a ship called the Sanigodaon with Bani, three students and Captain Desmon for the island of the Narawan, or ‘other’. Soon he discovers that there is so much more to Heven than the small part of it that his people colonised and made their home.

This is a tale that has everything. Described as a planetary romance and with a setting that begs for the Avatar 3D treatment, it is nevertheless the detail and honesty in the characterisation that does so much to bring the story alive and make it real. In some ways it is rite of passage—Kal grows up, he finds a friend and falls in love—and yet there is so much more.

Lavie Tidhar makes inventive use of Bismala language: sometimes there is a translation and sometimes the meaning hovers elusively just out of reach. It is a game he invites the reader to share—there is an inspired chapter heading that invites a gasp of appreciation and many other resonances and allusions lie in wait beneath the surface of the story. This playing with the reader invites complicity; the reading experience takes on something of the dynamic of a story teller telling tales to an audience around the fire.

It is perhaps not only Moli Solomon who draws fabulous images on water. Her creator shares something of the same art, giving us cloud castles that drift just out of reach yet linger in the mind. I felt like a child who didn’t ever want the book to close or the story to end.

This is a well written review and the book sounds fabulous. I will certainly grab a copy based on this.