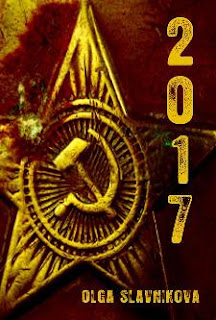 Acclaimed Russian writer and critic Olga Slavnikova’s 2017: A Novel won her a second Russian Booker Prize three years ago. London-based Duckworth Publishers has recently released an English-language translation by Marian Schwartz, which given Duckworth’s list, can be taken as either a rare foray into speculative fiction (like their publication of Brian Aldiss’s HARM back in 2007), or a reminder of the often blurry line between “literary fiction” and “science fiction.” (As might be expected given Slavnikova’s standing, and as I quickly confirmed, the latter strikes me as more useful.)

2017 centers on a gem-cutter named Krylov living in a large city in Russia’s Riphean region at the titular near-future date. (The city is unnamed, and the fictional Riphean mountains are only vaguely located for the reader, though it has been common to take them as drawing on Slavnikova’s native Urals.) In the book’s opening pages Krylov is at the train station, seeing his old colleague Professor Anfilogov off on a prospecting expedition in the Riphean mountains. Before he departs the scene he encounters a mysterious woman named Tanya, with whom he begins an unconventional liaison. Meanwhile, a bizarre replay of the events of a century before—the October Revolution of 1917—seems to be getting underway inside the country.

There is a touch of the thriller here in Krylov’s involvement in the illicit gem trade, and the intrigues in which his affair with Tanya embroils him, the stirrings of political revolution, and later on, the business scandal Krylov finds exploding around him. However, the thriller elements are essentially a framework for Slavnikova’s satirical portrait of an ultra-commodified, decaying world where humanity has become superfluous.

To be frank, I found many of Slavnikova’s themes and techniques rather familiar. The novel’s preoccupation with authenticity and its absence in a late capitalist context; the exhaustion of history and politics; the touches of conspiracism and anachronism; the epistemological pessimism and the declarations of humanism as dead; the science fictional and fantastic touches blurring the boundaries of what is conventionally thought of as reality (and the organic and inorganic); the quality of rendering the familiar strange, and the deliberately oblique, diffuse, even hazy storytelling which deprives almost everything of solidity—this has been standard, even textbook postmodern fare for decades.

Nonetheless, the central subject, Russia one hundred years after the Bolsheviks, is a substantial one, and the book is compellingly ambitious in taking it on. Some parts of the story are quite memorable, like the depiction of the funeral home business run by Krylov’s ex-wife Tamara, which offers its customers a lottery drawing with prizes like Caribbean vacations. (The “Masker’s” revolution, in which Red Cavalry did battle with White Guards, is nothing short of brilliant.) There is an impressive touch of atmosphere in various places in the story, and the whole effectively conveys a sense of a shabby, decrepit, unreal world.

Yet, the novel only occasionally reached that level, and the fragments never quite added up to the postmodern epic the book seemed to be aiming for. The Riphean mountains intended to offer a counterpoint to Krylov’s city never came alive for me, and for that matter, neither did Krylov. Additionally, the narrative rarely gave me a sharp sense of the extremes of which Slavnikova’s characters speak, and which are essential to the story—those extremes of greed and commodification run amuck, of wealth and poverty, of the vulgarization, marginalization and even destruction of what should be respected as essential to life, even the best bits losing some of the punch they should have had. The vast journalism on the state of post-Soviet Russia I have seen these last two decades (fact more striking than fiction in this case), and a great deal of far less celebrated fiction (from Aldous Huxley’s Brave New World to Frederik Pohl’s The Space Merchants to the cyberpunk science fiction writers of the 1980s and their heirs) have much more vividly conveyed such visions.

Consequently, Slavnikova’s 2017 did engage me as a reader, but less often and more briefly than I hoped, especially given what the book accomplishes when it is at its best. When it was over, I felt that the book fell short of both its promise, and the unqualified praise that it has attracted from many reviewers, though its strengths still made it worthwhile.