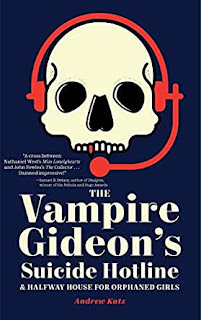 There are many of the standard tropes of vampire fiction: the need not to be out during the day, the diet of human blood, the invisibility in mirrors, “catching” the state of vampirism from another vampire’s bite, etc. At times it seems almost as if one of these tropes is written in so the reader can check off an item in the list, but every one of them has a literary purpose that furthers the plot. The “glamour” that Gideon casts allows him to appear like a live human being, hiding the decrepitude that is the way of all flesh, although Katz spares us any details about his unglamoured appearance. His hypnotic ability enables him to get people to do things his “clients” need, and that they would not ordinarily agree to do.

At first, the novel seems to be continually disrupted: each night Gideon, in his basement, answers calls from suicidal people, some of whom the reader gets to know through their regular recurrence, each with their own characteristic uses of language, recurring phobias and habits, and backstories that intrude on and inform their calls. The main “orphaned girl” from the title is a sixteen-year-old woman that Gideon rescues from the “foster father” who mistreats her; the interplay between the highly cultivated vampire and the pop-cultured teen is a well-played duet that Katz’s use of style brings out. It is most amusing when one of them imitates the other’s speech mannerisms, though at times that makes it confusing for the reader, who has come to identify the speaker through those verbal tics and styles. In fact, sometimes there is a passage of rapid-fire back-and-forth dialogue, or stichomythia, where I, at least, had difficulty distinguishing who was saying what.

There are several stories interwoven here, what with the different callers, the young woman who has moved in with Gideon—not sleeping with him, this is not that kind of December-May relationship—and Gideon’s various stories. For often Gideon, in trying to illustrate a point to one of his callers, will say, “May I tell you a story?” When he gets the caller’s permission, he tells a story from his personal experience, and one sees that the novel is really about what it was that happened to Gideon and how it made him into the vampire he has become. This is often a bit confusing because there are two romantic interests from his past life, both of which have had a profound influence on him, and I didn’t always remember their names. What he has been trying to do through his suicide hotline is to try to prevent others from making the same mistakes that he did, or equivalent ones given their circumstances. Over the course of the novel, these seemingly disconnected subplots gradually fall together in a way that makes sense, and the apparent confusion is shown to be a deliberate shell game where the author entices the reader, simultaneously making it difficult to predict exactly where the narrative is going.

On a second reading, the novel is very amusing—Gideon’s David Niven-like fastidiousness in language and proprieties is an ongoing counterpoint to Margie’s post-millennial slang and lifestyle—but suddenly certain juxtapositions are strikingly significant, and the reader sees why Katz set these characters up as he did. In fact, I had to put the book down on that second reading when a request from a caller, which did not initially strike me as being more than random curiosity on his part, struck me with the full force of what I knew from an incident later in the narrative. That incident is truly horrific in a vampire-novel sense, but at the same time is truly tragic in a human sense. Of course, on a first read, such elements are not evident; they are, however, depth charges that explode deep in your heart.

This is really a very witty, very funny novel. At the same time, it can be devastating. I recommend it most highly.
Posted by Djibril at 16:51

Now I want to read this!