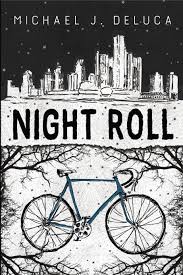 The premise of Night Roll is simple enough: there is a troop of riders who bike together following “the Elf,” an impossibly fast biker with a mythical status in the city of Detroit. A neighbor borrows a bike belonging to the main character, Aileen, so he can follow them and see where they are going. Where the narrative takes you is into the heart of many things: what it means to be a mother, to be part of a community, to be a city—to be Detroit. All of this is enveloped by a struggle of sorts between ancient forces represented by the Elf and Billy Beaureins, a centuries-old capitalist with designs of his own. As a piece of urban fantasy, a cli-fi fairy tale, does Night Roll work and would it be satisfying for fans of the genre?

The prose style can be a hard read. It seems overworked especially at the start but sometimes you get passages of almost poetic clarity piling description up such as this sequence where the main character talks to the imagined presence of her neighbor during a sleep deprivation hallucination:

She asked herself where it came from and had no answer. The place dreams come from, the place they’re supposed to go when you’re awake.

Once you get used to the rhythm of it, the prose carries the reader on with a steady poetic pulse. This passage is typical. If there is one thing this book excels at it is descriptive language. It is highly evocative and immersive. I know Detroit well, and it comes alive as a palpable presence, as well as a character in the way it too changes and almost responds to the ebb and flow of the community it harbors.

The effects of industrialization, and gentrification figure largely in Night Roll. Much of the narrative is about people who stay, who move into, and grow up in what is left of old neighbourhoods including vacant lots which have been replaced with urban farms that provide most of the food for our main character and her chosen family. The ‘Rebellion’ or the Riots of ‘67 underpin the society that Aileen takes in, herself an outsider.

Colonization is taken up directly in the mythos of the Elf, also called ‘The Red Elf’ by colonial sources. The figure is an anticolonial force, a trickster. Aileen reads about the history of the area going back to the founding of the Three Fires Confederacy of the Ojibway, Odawa, and Potawatomi. One of the secondary characters, Morris, is Grand Traverse Band Odawa and Scottish. Reg ‘the Redeemer’ a DJ in their close-knit community is Black, and the closest thing Aileen has to a mother figure. And Omar is an Arab bartender who becomes part of Aileen’s chosen family.

The fantastic elements in the story are clear. What is peculiar is the ease with which most of the characters simply accept the existence of the Elf, and the supernatural nature of the Night Roll. That was a hindrance to the believability of the story but one which was easy to look past.

There is an anti-capitalist strain to the novel, most clearly exemplified by the figure of the centuries-old capitalist Billy Beaureins whose quest seeks to trade in personal lives, ‘souls,’ and futures. He assumes that the Elf has a similar agenda. But this is also apparent in more nuanced ways: in the collective nature of Aileen’s chosen family who provide mutual aid to one another, food, security, companionship, a job. It’s found in the organic urban farms that Morris tends and provides Aileen and Christian’s food from, what they don’t get from the storied Eastern Market which is still a going concern in this near future Detroit.

A constant presence is the character of Christian, who is non-binary. Their mother, Aileen, has varying success with correcting people who misgender her child including those who continue to do so even after being corrected. Christian is a touchstone for Aileen, resented, loved, needed, and a burden. Their complicated relationship evolves as Aileen figures out her place in the City and as Christian’s mother. Two secondary characters, Omar and Morris, are gay and have their own fraught relationship which Aileen is never fully privy to, as is fitting. She catches the moments of tension between them, but also tenderness. Theirs is a relationship seen from the outside, apparently more going on beneath the surface.

Night Roll is a short work which has a huge scope: the entire history of Detroit from the prehistoric glacial era right through to a near future where urban decay has progressed alongside future tech. All is told in a flurry of facets, as experienced by the riders of ‘the Roll.’ It is a poetic look into the searing, tumultuous heart of Detroit. Fans of urban fantasy and cli-fi, as well as literary fiction will appreciate reading this novella. It is a work that can be read aloud, for the poetry of its prose, or enjoyed with an organic smoothie while you rock in a chair on your front porch on a summer evening.
Posted by Djibril at 17:09