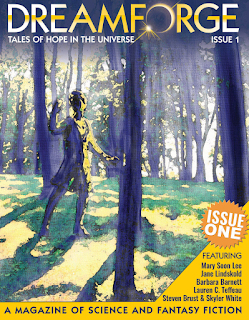 The first issue of this glossy and well-made magazine, DreamForge #1 bills itself as bearing “tales of hope in the universe,” and so joins a growing movement for optimistic or bright futures in SF. The editor’s preface further clarifies the zine’s agenda, beginning, “The world has been coming to an end for a long time,” and characterizing as “doomsayers” those who worry about our future. Worse, Noel dismisses climate crisis fears as an atavistic “fight or flight” response, and suggests that any harm we do now will be fixed by science in five hundred years. This is clearly not the optimistic SF of the hopepunk or solarpunk movements, where daring to dream of how we can really reverse the current moribund politics of our planet is a radical act, but rather a harking back to the glib futurism of golden age SF. The contents of this issue, ten stories, two poems and an article, are a more mixed offering—and widely varying in quality—than this initial assessment may suggest.

A couple of the most visible pieces seemingly share the tone of the editorial. The story whose illustration adorns the cover, “Walker in Leaves” by (editor) Scot Noel, is a post-human, far future story featuring genetically modified lemurs, urging us to welcome the cycle of life and evolution, even when that involves the passing of humanity. The story fails to imagine a future that really transcends human intelligence and interference however, even when the last trace of human architecture has disappeared, the engineered DNA of our successors is a human artifact. The first piece you see on opening the magazine, before even the ToC, is Mary Soon Lee’s “Coming of Age 2150,” a technically well-crafted poem that suggests children in 130 years time will be able to fix everything in the solar system.

A few stories do stand out as excellent reads. “Sing and Remember” by Lauren C. Teffeau is a strong tale of warrior sisters in a postapocalyptic secondary world, and one misunderstood scribe’s coping mechanism when she loses her soulmate. Jean Martin’s “I Am Not as Young as I Was” gives us a sweet and charming tale of an exiled, middle-aged Russian woman fighting the undead in a western city. Probably my favourite piece in the entire issue is also the shortest: the eighty-word micro-fic “Anthropomorphile” by Chris Sunberg, which presents a delightfully empathetic protagonist and also manages perfectly to marry form and content to a degree that qualifies this piece as poetry. An exception to my observation that this zine is not really about solarpunk, Sarena Ulibarri’s “The Spiral Ranch” is an enjoyable story in which an eco-futuristic urban farm is subject to rustling from a retrograde survivalist family.

It may seem a bit harsh to point out that a bum note is rung by the full back page advert plus two-page advertorial for the Scientology-owned L. Ron Hubbard’s Writers of the Future contest and anthology, right after the main content of this issue, since I suppose all publications need to take advertising to stay afloat.

At the end of the day this is a glossy, attractive print magazine designed and edited to an extremely high standard, and with more good stories than bad; on those grounds alone it deserves to succeed.
Posted by Djibril at 17:07