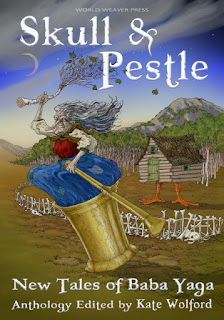 Who doesn’t love Baba Yaga? In this golden age of Folktale retellings, the witch of Russian folklore has been a favorite subject, and dozens of recent novels in a variety of genres draw inspiration from this feared and beloved character. Audiences have been fascinated by her for centuries—Baba Yaga appears in numerous tales in A.N. Afanas’ev’s nineteenth-century collection Complete Folktales, the largest and most well-known collection of regional Russian folktales. Skull and Pestle: New Tales of Baba Yaga is a collection of new retellings of these tales and new narratives imagined around this character. The collection will be a perfect introduction to Baba Yaga for those who have not yet heard stories of the grandmother witch in the woods, and there are several gems for those who are more familiar with her tales, although many do not depart too significantly from the folktales.

This collection is edited by Kate Wolford, who has edited several other anthologies on folklore themes, including: Beyond the Glass Slipper: Ten Neglected Fairy tales to Fall in Love With, Frozen Fairy Tales, and two collections of Krampus stories. In this collection, the introduction by Amanda Bergloff will be useful to those new to Baba Yaga—she gives an overview of the common themes of Baba Yaga tales, and attempts to explain the ‘complex and contradictory nature,’ of the witch; that is, her ‘penchant for either helping or eating people.’ Baba Yaga appears guised as both benefactor and malefactor, and sometimes both at once.

It is difficult to pinpoint the appeal of Baba Yaga, but I suspect the primary source of the glamour she has cast on us is fear: she’s an ancient and ugly old woman with pointy iron teeth who lives deep in the woods in a hut that stands on chicken legs, surrounded by a fence made of human bones, lit by glowing skulls. She travels through the woods in a flying mortar and pestle, and kidnaps and eats children. She is the quintessential witch we fear in the woods at night. But Baba Yaga is more than a monster—in some tales she is a magical helper who heals the wayward soul who dares approach her hut. Her magic is powerful and may be transformative for those she favors, although she never offers anything without steep payment in return. Baba Yaga is a kind of trickster; perhaps so many of us who love her do so out of an optimism that we would be among those chosen few.

The collection begins with “Vasilisa the Wise” by Kate Forsyth, a very straightforward re-telling of the classic tale in modern language. A common trend in this collection, Lissa Sloan’s “A Tale Soon Told” combines several different Russian tale types; unlike folktales, which rarely if ever describe the feelings and motivations of characters, this story describes Vasilisa’s emotions and responses to her harrowing experiences. The story takes place in three phases: in the first, the protagonist is a young girl who becomes a woman at the first Baba Yaga’s hut; in the second, she is pregnant and learning to care for her child; in the third, she is an old woman who discovers Baba Yaga inside herself. Here Baba Yaga is a symbol of women’s wisdom, and the journey to her hut on chicken legs is a journey to one’s own strength, power, and identity.

Jessamy Corob Cook’s “Teeth” is an eerie tale that focuses on the backstory of the three mysterious white, red, and black riders that are a feature of the Baba Yaga folktale. “Baba Yaga: Her Story” by Jill Marie Ross, as the title suggests, imagines an origin story for Baba Yaga, combining episodes of Baba Yaga tales with those of Koschei the Deathless, another fearsome character of Russian folklore. This story tells of a magical girl’s lonely and loveless childhood, and how her loneliness led her to become the witch in the woods. It is a tale of female friendship and chosen family. Rebecca A. Coates’s “Boy Meets Witch” takes place in present-day America—Baba Yaga is an old Russian woman in a double-wide trailer, and a young man seeks her help in taking revenge against a bully at school.

The two stand-out stories in this collection in my opinion are “The Partisan and the Witch” and “The Swamp Hag’s Apprentice,” both of which remove the Baba Yaga narrative from the liminal ‘no-time’ setting and re-locate it—in Nazi-occupied Poland and the deep south swamps of post-bellum America, respectively.

Charlotte Honigman’s “The Partisan and the Witch” is a haunting retelling of the Baba Yaga narrative set in Poland during World War II. The main character is a young Jewish woman in hiding whose family, including her female lover, have been killed. She goes to Baba Yaga seeking revenge for the death of her loved ones, with guidance and support from her magical helper, the ghost of her beloved Rywka. Honigman uses the material of Russian folklore to craft chilling scenes that ache with the grief of the Holocaust—for example, one of the tasks Baba Yaga gives the protagonist is to sort through a massive pile of shoes taken from those who have been killed, and to clean them and pair them in sets. This story effortlessly weaves a complex and real backstory into this short narrative, and the characters are bold and well-formed. Honigman has captured the eerie beauty of the traditional folktale in this tight and well-plotted story.

“The Swamp Hag’s Apprentice” by Szmeralda Shanel is an electrifying story that re-tells the Baba Yaga narrative but with Black American characters living in the swamps of the deep south. The tale is told in dialect that infuses this familiar tale with a sense of humor and an honesty that wonderfully expresses the most powerful themes of this tale. Each detail of the Baba Yaga character, here called the Swamp Hag, has been translated from Russian to its contemporary equivalent: the mortar and pestle the witch flies in is here a cast-iron skillet and wooden spoon, and while the Russian protagonist is given the task of sorting a pile of grains, Queenie must sort, wash, and prepare a pile of mayhaw berries for jam. It is remarkable how organically Shanel settles this Russian narrative into a setting so distant in time and space. The crowning achievement of this story, however, is the Swamp Hag herself. Her terrifying appearance, her voice which is by turns cruel and kind, and her uncanny ability to see and speak the truth. Echoing the comic voice of many African-American folktales, the Swamp Hag is funny. It is a perfect addition to this character. Shanel’s story extends beyond the traditional Baba Yaga narrative as Queenie stays on with the Swamp Hag and becomes her apprentice in magic, herbal healing, and reading and interpreting nature and dreams. As in many of the other stories in this collection, the character Baba Yaga is for modern writers the wise woman who does not suffer fools but will protect and nurture those who need it. As with the other young women in this collection, when Queenie sets out on her journey to the witch, she has begun a journey to her own power, and in stepping through the door of the hut on chicken legs, she joins a long lineage of women witches who have passed down their medicine and magic.

What I appreciate about this collection, most evident in Honigman’s and Shanel’s stories, is how the retellings help the reader better appreciate the traditional tales, or appreciate them in a new way. Honigman emphasizes the darker side of Baba Yaga, as a kind of Goddess of Destruction. Shanel illuminates Baba Yaga as keeper of folk magic, as well as drawing attention to the at times comic absurdity of her character. As a collection, some readers may find some of the stories too similar to one another and to the classic Baba Yaga folktale. Still, there are several stories herein that are so excellent they make this collection a worthwhile read for anyone, but especially for those who love folktale retellings or who are intrigued and compelled by this bizarre and singular character.
Posted by Djibril at 17:10