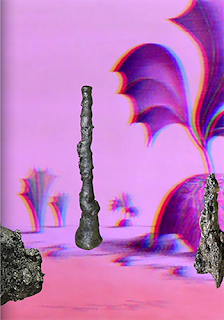 Spoiler alert: Anyone hoping to find Iron Man on the walls is going to be hugely disappointed.

It’s hard not to have preconceptions about things. Our lives are surrounded by biases passed to us from family, friends and society. The speculative genres have more than enough internal issues to keep us busy. If someone says “Sci-Fi-inspired Art” to me, my head fills with the artwork of book covers, film posters and related paraphernalia. When I heard about a Sci-Fi-inspired exhibition. I secretly hoped I’d find some reference to the artwork I connect to science fiction.

However, the greatest strengths of Sci-Fi, Fantasy and Horror are that they have a story to suit everyone. The genre can be enjoyed by all ages and all walks of life. It’s often the first to question truths about society. It can cross genres. It does open doors. You don’t need to have any qualifications to join in.

Two things are important then, right here. My idea of Science Fiction is not ‘hard, space opera, or popular.’ It is parallel to anyone who knows a Gollancz from a Tor, and an Angry Robot from a Fox Spirit—and let’s not leave out the comic, game and screen-based stuff while we’re there. Your idea of Science Fiction? Well. Your idea might be more Hodderscape than Orion, Space Opera rather than Martian or Handmaid’s Tale over Marvel. Perhaps there’s a sizeable chunk of Masterworks blending with Barbarella?

With each new twist, our genre has inspired and established things we take for granted. However you want to look at it, there is a point where all of those narratives cross. That point has plenty of labels depending on where the book appears on a shelf. Most will recognise it as the question “WHAT IF?”

And “what if” is exactly where this exhibition lives.

Is this Planet Earth? is inspired by J G Bollard’s novel, The Drowned World, (1962) John Wyndham’s The Day of The Triffids (1951) and the film Silent Running (1971). Despite those pieces all predating most of the readership here, though, it doesn’t look to the past. Like the quietly growing Solar/Hopepunk genre, the exhibition looks forward. Angela Kingston’s curated pieces ask where our planet would be without humanity alongside it. What happens if we carry on destroying our habitat? What if these pieces of art are the sole remaining records of mankind?

Each artist comes at this from a different perspective, encouraging an open mind to explore and question. It is carefully presented, and conceptions of what is known and expected are cleverly reversed. Kingston asks us to leave the smutty sides of our minds in the gutter and look up at the stars for a while.

Dan Hays’ work explores the digital image. Large canvases are the framework of the exhibition. Some of Hays’ paintings use tiled repetition to mimic digital media. Others are oil recreations of images and clips found online. “Science Fiction has become Fact.” Hays said when asked about the connection to Science Fiction in his art. He informed me he had only just started exploring his first smartphone, a device common to many of us but possessing overwhelming potential for him.

On the opposite wall Katherine Reekie’s Bio Specimens offers an old-school Darwinian feel. The work was inspired by her time at his place of birth, and is like walking into the stereotype eccentric scientist’s lab, or a classroom at Hogwarts if you prefer. Her reflections of Jules Verne’s and H.G. Well’s worlds of Science Fiction are reinforced by the actual 19th-century insect specimens on display from the Hull Museum Archives. Gold gilded butterflies are poised to fly and insects that might be at home on the cover of an Adrian Tchaikovsky novel play hide and seek behind light and shadow, some trapped in oil-painted jars. Eye stalks watch you as you pass. Reekie’s years of watching Doctor Who informs her work, as does her childhood of watching 1950’s sci-fi. If you look, you’ll find likenesses of several genre favourites.

Jason Singh’s Mimesis III (2018) plays as you explore the gallery. Snippets of morning birdsong and evening owls, the refreshing sounds of a babbling brook are a serene experience amidst this outlandish art. Until you discover all the sounds heard are made from a human voicebox and then synthesised. Singh is a beatbox artist. It is a strong reminder of how important perspective is and it’s emphasised by the many Landscape paintings by Dan Hays that surround it.

More questions are raised as you lounge on cushions to watch Sean Vicary’s Sea of Glass (2008). Coastal areas around Hull, like the West of Wales where Sean Vicary took the images for the stop animation film, can often feel like it’s both been halted in time and also running out of options for its future as sea waters rise. Vicary suggests the rotating shells could well be visiting spaceships. ‘What if?’ asks Kingston. What if patterns on limpet shells are coded messages from another race?

Helen Sear’s The Beginning and End of Things (2015) has you looking into a possible future—drifting vividly through seasons in the canopy of beach trees. Like a scrying pool that no-one can force a clear answer from. A display case of rare and unusual shells from the Hull Museums Collections lets you ponder further on these two film pieces but also returns you briefly to the reality under threat.

Like the Italian fungus growth that inspired Salvatore Arancio’s art, the glazed work awaits central in the second gallery. OK. So yes. Hello, phallic likenesses. Just as with the internet there doesn’t seem to be a way of avoiding dick pics. There’s always one isn’t there? Well, several in this case. You can hear the sniggers, but also you hear the debate,


‘—Isn’t that what plant life looks like?—’
‘—Do you remember watching Triffids?—’

Leafy Sprouter (2015) and They’re Here, They’re Under Us (2015) shifts the conversation more often than not. Much like the fungal inspiration does for the environment, the ceramic pieces convert the trashy initial thought back to the questions whispered by the exhibition. The quiet contemplation and stuffy art gallery stigmas are broken. The conversation shifts on to another of Hays’ paintings about how he’s captured the reflection of a window. The image could have been a view from Winterfell.

More cushions are taken for granted. The fabrics scream rarity and expense. These cushions are Alfie Strong’s Sizzling Lake (2018) tapestries. Their invisibility presents a statement on humanity’s current relationship with the world that gives it life. Not that the art is being used, as that is the artist’s intent, but that how easy this woven masterpiece is passed without notice. These cushions display images of Plasticine models. The miniature watery habitats are photographed, manipulated, processed. And then consumed.

Bound To (2016) is impossible to miss. Unthreateningly pink kinetic stamens suspend from a membrane. They ooze from overhead. You might be in an alien mouth, or some science experiment has shrunk you to the size of an ant. The connection to biological life is hard to ignore. Halina Domiska’s work responds to presence. Calm, panicky, or ignorant of the humans wandering inside it. What’s acceptable in human privacy and equality? Where, therefore, is the boundary of life as you invade the space of this art?

Unobtrusive but persistent, Singh’s faux birdsong reaches through the galleries as a reminder that not everything is what it seems. While Domiska, Reekie and Hays didn’t consider their art to be influenced or inspired by science fiction as a genre, none were offended by the reference to it and Reekie was pleased to be included.

Is it an exhibition that everyone can enjoy? Yes. There is something for everyone if they want to look. The uncanny, the impressive, the thought-provoking. I got a lot more from the exhibition by purchasing the catalogue, and that’s not something I usually do. No, there aren’t any force-field-protected space stations or iconic 1970’s artwork adorning the walls here. Anime didn’t get a look in. It might in sixty years. How long does it take for something to develop from new to normal?

Is it Science Fiction? Because of technological breakthroughs in our daily lives, people are more inclined to cross through the point where science fiction and fact now meet. Hope/Solarpunk’s themes scream at me from the art. Like many of Science Fiction novels and stories, it leaves you with ideas to consider. The questions Is this Planet Earth? poses are concerning, inspiring, possibly galvanising. There are no glib responses or use of didactic soapboxes. This, more than anything else, embodies the spirit of our genre.

Is This Planet Earth? Could be a portal to genre novels. It is certainly an exhibition of the uncanny, the wonderful and the unexplained. It is Weird Science in an alternate universe.

So happy to read this review of 'Is this Planet Earth?' Thank you for all your inspiring insights -- and for your incredibly intense involvement with all that you saw. "Coastal areas around Hull, like the West of Wales where Sean Vicary took the images for the stop animation film, can often feel like it’s both been halted in time and also running out of options for its future as sea waters rise." Wow! Exactly! I really enjoy your contemplation of the show in relation to Sci-Fi, which you clearly know a great deal about. It's so fantastic to have all your thoughts -- it's these kinds of responses that make it all worthwhile. Angela (curator of exhibition)