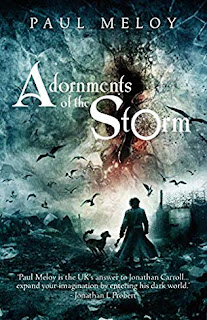 As the story continues, the devil-in-dreams sends some of its Autoscopes travelling back to 1985 through a “narrow flux of Dark Time” (61) in an effort to eliminate psychiatric nurse Phil Trevena. The Firmament Surgeons and their allies intervene to drive the Autoscopes back. When the action switches back to the present, it becomes apparent that the devil-in-dreams is struggling to break free. It is up to Phil Trevena and his companions to prevent that from happening. To achieve their objective, they must figure out what role Andrew Chapel, a psychiatric patient who had presented himself to Phil for analysis, is playing in this conflict. The Firmament Surgeons and their allies divide in order to conquer as they fight the battle on several fronts. Suspense is maintained as a real sense of danger is established, with several scenes ending in cliff-hanger situations. Meloy employs third-person narrative form, switching between characters to advance the action on multiple fronts. This change in viewpoint is accomplished without sacrificing the reader’s ability to follow the thread of the story.

Some parts of the novel take place in the “real” world with which we are familiar, in settings like garbage dumps, pubs, and run-down apartments. Other portions have more fantastic settings—on the Quays created by the Firmament surgeons or their enemies, or in the massive area where the Looms operate. Meloy enables the reader to build clear images of both the real-world and fantastic settings through his artful description, which includes sensory imagery engaging sight, sound and smell. Though some of the settings may be mundane, Meloy’s prose rarely is; in fact, his turns of phrase, insights, and use of subtle humor are all factors that render his work eminently readable.

Meloy utilizes powerful imagery, such as “its fingers rattle with a sound like rats teeming over a tin roof” (69), “the effortful sucking sound of an old fridge being yanked open” (101), and “the air was thin and dusty and had the unremitting smell of minerals and the smoke from scorched buildings” (152). Some of the Meloy’s descriptions create a sense of foreboding. A garbage dump is described thus: “towering pyramids of rubbish and a maelstrom of gulls wheeling above it all, crying like a nursery of forsaken children” (152). When the devil-in-dreams is calling to Andrew Chapel, he experiences the summons as “incessant, a black, smoking cable being drawn the length of space, reptile-cold and subtle as a concealed blade, and into the ventricles of his mind” (174).

It is when he describes the antagonists—the devil-in-dreams, the Autoscopes, and the Toyceivers—that Meloy’s imagination really takes off. Phil Trevena encounters the Autoscope Rainscissor, “its long blue face dipping, reaching thin arms with tiny fists that were the skulls of birds, empty-socketed, beaks opening and closing with horrid dry clicks” (52). The scenes involving the Autoscopes and their allies take on a creepy quality in some cases. On one occasion, a man Phil is talking to morphs into an insect. On another, Phil glimpses a number of horrific creatures, and notes that “it was daybreak, but all it was bringing was an illness of clarity he would rather not have” (52). Then, there is the description of the Autoscopes gathered in a field, marshalling their forces before an attack:


They were massed a quarter of a mile away, their engines steaming, smoking, sending up pillars of gas that hazed the air and made it tremble. Against the darkening sky it was difficult to tell where the silhouettes of the buildings at the top of the town ended and the piled clatter of machinery began. Perspective made it look like the town was transforming into something industrial, extruding blocks and edges of metal, a morbid conversion with intent to shear the meadow and the forest to muck and splinters. (229)


Meloy’s fertile imagination also spins out oddball but delightful settings like the Lacan-cafe, a place that can spring up on the Quays “where there’s a vacant lot or an empty shop” (164). The Lacan-cafe is a place “for people to get together and process stuff, make sense of their dreams” (164). The patrons speak French because “it’s the language the Autoscopes hate the most” (165) due to its elegance.

Meloy utilizes wry humor on occasion. Upon shaking Rob Litchin’s hand, Trevena “was saddened to feel how weak Rob’s grip was. It had been like receiving a handful of warm twigs” (96). Another character, commenting on Andrew Chapel, notes that he has “no history of doing anything particularly mad, other than creating bad art” (33). Andrew Chapel shares about his childhood: “I think my parents were actually soothed by the introduction of the three-day week and power cuts. It put them in mind of the war, and happier times. Their youth was gone and mine was beginning and they wanted for me the life they had had” (25).

The novel features strong, distinct characters that, in my view, will seem more rounded out for those who have previously read The Night Clock and know some of the history. Each individual has his or her own particular talents, and there are strong female as well as male characters. Allied with the human protagonists are two animals, Bronze John the tiger and Bix the dog. There is an undertone of empathy and understanding in the way Meloy describes his characters, both human and other, a sense that he “gets” them and knows what makes them tick. For example, a distraught Bix makes “the enquiring, perplexed chuffing sound of a dog asking those around him, or the elements, or God, should no one be about to offer comfort, why is this happening. I don’t understand” (225). As a dog owner, I understood exactly the type of behaviour Meloy was depicting.

As with Meloy’s previous novel, Adornments of the Storm includes psychiatric patients and mental health-related settings. Meloy’s writes from a place of knowledge, having worked in mental health roles and environments. When the action flips back to 1985, Meloy takes us to an asylum that is slated for closure: “a terrible place, and its days were numbered” (50). Meloy portrays the patients with empathy, at the same time conveying the atmosphere of the institution. Trevena, then just starting out in his career, “was young and modern enough in his outlook to be staggered that this hospital still used a Punishment Ward, a flagging, cruel, and inhuman extension from the first half of the century, where patients that didn’t toe the line were sent for months of reprimand and reconditioning” (50). In the shoe mender’s building, the “small, broken men in gray overalls” (37) are subject to cruel and sadistic treatment by Chard, their overseer. One of the characters walks through a dormitory, “past the beds with their attendant sad, empty cabinets that display no photographs of families, no trinkets, just overflowing ashtrays and some blue china hospital property teacups” (63).

Adornments of the Storm impels the reader on a roller-coaster emotional ride. Some moments are dark, as when Bix is lying in the dirt, where he “could taste and smell the overwhelming odour of death, and it was black and nightmarish with not so much as a pinhole of light at the end of it” (170). There are other sections where characters experience self-doubt or find themselves questioning whether their efforts in the ongoing battle against evil are worth it, but these moments are counter-balanced by scenes which are backlit by a sense of mystery, hope, or wonder. Chloe and Dr. Mocking walk through an area known as the Looms, “a labyrinth of monumental brazen machines, an endless factory built for archangels” (185) and Chloe realizes “it was faith … that flung these Looms, faith that fuelled them and knitted their equations” (186).

My personal view is that reading Adornments of the Storm will be a richer experience for those who have read The Night Clock. One example comes in the case of the opening sentence of Adornments of the Storm: “Rob Litchin was drunk for the first time in seven years” (7). Those who have The Night Clock as background had an immediate context for this sentence, and can grasp not only that something is amiss, but that it must be significant. Having read The Night Clock, I also immediately recognized other familiar settings, including a cave with a ladder leading up to it and a bar called The Dog With Its Eyes Shut. That being said, Adornments of the Storm can also be experienced as a one-off. Either way, Meloy’s novel is an engaging read, rich in imaginative detail, suspenseful, and, in the end, uplifting.
Posted by Djibril at 08:26