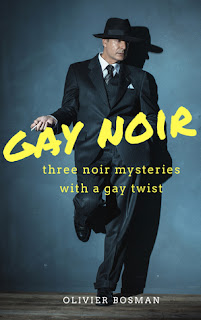 This collection of three novellas by Olivier Bosman lives up to its title: the stories all feature gay characters, they are very noirish and pretty mysterious, although like all detective fiction, the mysteries are fully revealed in the end. There’s something dated about, Bosman’s fiction that’s to do with more than his historical settings. His style is reminiscent of the pulp fiction writers of the 40s and 50s, authentically spare and undescriptive. The action proceeds in relentless black, white and sepia tones, few are the flashes of colour or flickers of humour that leaven the characters’ moods as they saunter, swagger or rush purposefully from one scene to the next. And this does make it very ‘noir.’ For purists, this treatment will doubtless appeal. And there’s something undeniably satisfying about the way, his protagonists circumvent plot obstacles by making a sudden fortuitous discovery or winking at the right person.

The gay content is the book’s main fascination. There’s plenty of sex, or at least allusions to it. The characters are often horny and led by their dicks (no pun intended) into more than they’d bargained for. There is even the odd lesbian encounter. All of the stories are set in the period before the legalisation of homosexuality in the UK in 1967, so each gay encounter is tinged with illicit appeal and fraught with danger. Bosman’s men seek sexual satisfaction but never affirmation. They care nothing for being accepted in society, only evincing a desperate fear of disclosure. In this respect Bosman’s gay reinterpretation of the noir genre is very interesting. To be ‘noir’ for Bosman’s male characters, is to be deeply narcissistic and emotionally empty. The characters puff on their cigarettes, tope their whiskies (Tom Collins) and never question the emotional vacuum of their lives.

The first of these stories, “The Honeytrap,” is set in London and features a private detective hired to find proof of a husband’s infidelity. This proves to be a cover for a complex plot involving military secrets and a Russian double agent. The detective has a glamorous female secretary who eventually finds herself dragged into the action.

“The Deluded” is a slightly over-long story about a pair of Jewish refugees in post-war London. The events are revealed in a series of flashbacks, and through the eyes of a young writer. The relationship between the writer and an older man develops in interesting ways with homoerotic overtones. Both men are uncertain about their sexuality and this gives the story a threatening sense of tension.

The final story, “Estranged,” was, for me, the best of the three, involving a young boy and his would-be-screen-actress mother and a plan involving kidnap and blackmail. There’s a casual violence about the kidnappers bungled plans that is convincing and the mother’s part-fawning, part-domineering attitude to her son is well-observed.

Bosman is confident with his plotting and uses narrative structure to interesting effect. He plays with different points of view to give his stories momentum and depth, which makes up for a tendency for the action to be marred by occasionally leaden prose. I think the collection could have befitted from editorial care and the longer stories could have been more effective if shorter. However, it’s a brave attempt to enliven the rather dull heteronormative standards of 1940s pulp fiction with some gay characters and it serves as a reminder of the closeted world in which gay people lived before more enlightened times.
Posted by Djibril at 12:37