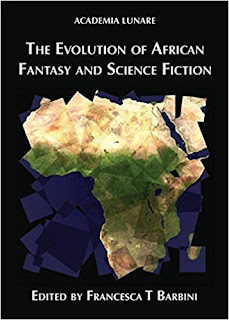 This short book, published under the Academia Lunare imprint of Luna Press Publishing, contains five essays on aspects of SFF created by Africans, in Africa, or containing representations of Africa or Africans. It is not really a book about “evolution” of African speculative fiction, although the first three papers do discuss historical writing and modern developments, but it is nevertheless a fascinating and important first step in a history of scholarship of this under-appreciated section of the genre. I would like to see a dedicated academic journal publishing an issue of this scale once or twice per year (and emphatically not only in English).

The first paper, Peter J. Maurits’s “On the Emergence of African Science Fiction,” tackles the twin conundrums of why SF developed as it did in Europe and America, and why it did not develop in parallel in Africa. Walking a pragmatic line between the long history of SF (where ancient and mediaeval proto-SF works are seen as ancestors to the genre) and the short history, where it essentially began with H.G. Wells in the late 19th Century, Maurits traces the influence of the Industrial Revolution, science, evolution and colonialism on science fictional genres and tropes. At the same time, the experience of Africa as a colonized land, the economic exploitation and continued suppression by her former colonizers, and trends in postcolonial and decolonial literature combine to explain the slow uptake of science fiction on the continent. He pinpoints an essentially arbitrary date of 2007 for the “emergence” of African science fiction, and explains the widely documented “explosion” of SF in the last ten years by reference to insecurity caused by the Global Financial Crisis, political upheaval around the Arab Spring, and other social and technological influences such as the rise of cellular phone use, growing access to Internet, etc. There is of course more to it than this simplified summary can do justice to, and this is chapter is very much worth reading by literary scholars and SF critics alike.

Nick Wood contributes “Forces Shaping the Development of South African Speculative Fiction Down the Ages,” which is less of a theoretical argument than it is a historical overview of SF and fantasy as written by South African authors, from the early twentieth century to the present. For most of this history, the authors under discussion are almost exclusively white South Africans, and even after the end of Apartheid black African authors are underrepresented in SF. Wood discusses some of the common themes in South African SF, and offers some explanations for the imbalance, but unlike Maurits this is not the core of his paper.

Another more theoretical paper follows in “The Dangers of Expectation in African Speculative Fiction” by Eziyoke Chukwunonso, in which the author engages rather polemically with other scholars and critics on the topic of what African SF should or should not be, or perhaps more properly, how it should or should not be read. The academic polemic aside, the main value of this paper is the useful overview and discussion of three main literary questions: 1) whether the lack of African SF (or at least the failure of SF to be taken seriously among African literary circles) is the result of the importance of realism in the agendas of influential authors such as Achebe and Soyinka; 2) whether African SF is or has been primarily written for (or read by) African readers, or for a “Western” audience thirsty for “diversity”; 3) why the recent renaissance of African SF, if there is such a meaningful movement, is happening now. These are all very complex questions, and this brief review cannot do justice to Chukwunonso’s answers to them; indeed this is not a definitive work on the questions, but an exploratory essay which engages with, and will doubtless be followed by, many other scholars in the field.

The last two papers in this slim volume are not theoretical discussions or broad overviews like the above, but rather brief literary studies of representations of Africa and Africans in SF. Polina Levontin’s “Scientists in Nigerian Science Fiction” takes what she oddly calls a “distant reading” approach, but is in fact a hand-picked and fairly superficial tabulation of scientist characters taken from Nigerian SF (six novels or novellas and five collections of short stories seem to make up the entire corpus). Given the small body of data, statistical visualizations are not highly meaningful, but some observations and patterns make interesting reading. “Portrayals of South Africans in Popular Entertainment: Bad Accented Baddies, Prawns and Black Panther” by Robert S. Malan, in contrast, discusses the representation of South African characters, often villains, in movies—usually themselves not from Africa. Malan puts his observations into the social and historical context both of Hollywood cinema, and of the global backdrop against which audiences and filmmakers view the works and therefore the portrayals in them, and ends with the hope that African creatives will have more of an input into these representations in the future.

This volume does not really present a single “evolution” of African SF, although several of the papers herein take historical or even diachronic approaches to their material. Coverage of the field as a whole is very patchy, not to say scattershot, but of course a definitive study would require a handbook with dozens of authors, and more thematic and academic coherence than a title like this one can offer. A fairer criticism is that the papers in Barbini’s volume are almost exclusively Anglocentric, with other languages (especially the Arabic and French of North African SF writers) neglected; this is symptomatic of discussions of African SF in English-speaking circles, however, not a unique shortcoming of this work. And while, as I have suggested, The Evolution of African Fantasy and Science Fiction reads in some ways like a single issue of a (very welcome) journal of African SF studies, it is nevertheless a snapshot of a fascinating and clearly burgeoning field in modern literature, and I look forward to seeing more work in this vein in the future.
Posted by Djibril at 17:38