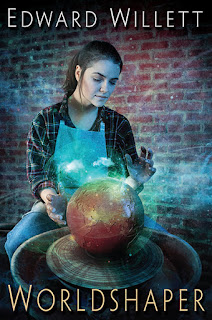 Imagine having the power to shape a world just the way you wanted it. Take a group of ten people, and you’d likely end up with ten slightly different—or perhaps greatly different—lands. Shawna Keyes, the protagonist of Edward Willett’s novel Worldshaper, has that kind of power, thanks to an alien named Ygrair, who established a school that imbued its students with the training to become Shapers of worlds. These worlds exist in a phenomenon known as the Labyrinth. Travel from one world to another within the Labyrinth can be done through “portals”, though only a few people are able to create and open them.

Not all of Ygrair’s fellow Shurak agree with her decision to share their secret knowledge with other races, or share her reverence for creativity. Unlike Ygrair, the majority of the Shurak prize control and conformity. Determined to make Ygrair atone for her wrongs, they have sent one of their own, who goes by the name of the Adversary, to track her down and take away her power. Fortunately, Ygrair has friends who remain loyal to her. And because the Labyrinth is huge, and consists of inter-connected worlds that can only be accessed by portals connecting adjoining worlds, the Adversary’s job won’t be particularly easy.

Ygrair has dispatched Karl Yatsar on a quest to find her a Shaper—not just any shaper, but one with extraordinary powers. And Karl thinks he may have found just that when he comes across a woman named Shawna Keyes. There’s just one catch—Shawna has forgotten her training, and until she is filled in by Karl, she doesn’t even know that she has Shaped the world in which she resides. As far as she knows, she’s just an ordinary citizen trying to make a living as a potter. Unfortunately, Shawna’s lack of knowledge about how to use her power could prove dangerous, not just for her but for all of the worlds in the Labyrinth.

After the Adversary’s botched initial attack on Shawna, she is left reeling, uncertain about what has really happened, or why. When Karl arrives on the scene to fill her in, she isn’t sure whether to believe him or dismiss him as a lunatic. Reluctantly, Shawna comes to admit that her best chance of staying alive is to join his quest. Karl and Shawna must first close the portal through which Karl and the Adversary entered Shawna’s world, and then open a portal into the next world. Along the way, they must elude the Adversary, who is slowly but surely swaying the political powers-that-be, the citizenry, and the military against them.

Worldshaper sets up a classic good-vs-evil confrontation. Shawna, Karl Yatsar, and the mysterious Ygrair stand up for individual freedom and creativity. The iron-fisted Adversary, on the other hand, strives to turn all worlds into totalitarian states, thus fulfilling the Shurak version of Utopia. The novel follows Karl and Shawna’s quest as they employ various means of transportation, and negotiate increasingly challenging terrain, all the while knowing that the hunt is hot on their heels.

Willett tells the story through three main viewpoints, swapping around between Shawna, Yatsar, and the Adversary, although most of the time is spent with the first two. Shawna’s portion of the book is narrated in first person, while Yatsar and the Adversary get the third-person treatment.

In terms of world-building, there are enough similarities between Earth and Shawna’s world to provide the reader with an anchor, with sufficient change to make things interesting and novel. Karl notes that Shawna’s world is very close to the “first world”, as Earth is alluded to. That’s because, for reasons we don’t yet know, Shawna has created many parallels to Earth in her World, only with slight modifications. For example, she drives a Fjord car, has Greentooth technology, and sports a Hi-Phone. However, there are also some significant changes. As one example, the leader of the United States presides over the Emerald Palace and not the White House, a nod to Shawna’s love of the classic Wizard of Oz.

One neat twist to Willett’s Labyrinth is that the shaped world automatically fills in the blanks. In other words, the Shaper doesn’t have to plan out everything to the last detail. In the case of anything they don’t specify—like, for example, how property survey markers are laid out—the world simply shapes using its own internal logic, or by patterning itself after the First World.

Because the whole notion of the Labyrinth, Shapers, and shaped worlds is novel, and because this is the first book of a pending series, there is a fair bit of exposition, although Willett parcels it out rather than unloading it all at once. This understandably affects the pace of the story. However, I felt that the narrative picked up steam toward the end in a sequence where Karl and Shawna are shipboard, having convinced the owner of a yacht that they are long-lost friends in need of a lift somewhere important. Perhaps that’s because there is less explanatory exposition here, or maybe it’s just Willett’s phrasing in this section, but the words really seem to hum here.

As is the case in many of the other works by Willett that I have read, there is humour to lighten the way. Much of the humor develops through the interactions between Shawna and Karl. Though Karl is familiar with Earth, most of Shawna’s allusions to pop culture and literature go well over his head. Later in the book we learn the reason for this, when Karl lets it slip that he attended a live reading by Charles Dickens, who died in 1870. Understandably, he is not so familiar with the works Shawna grew up with.

Willett gives Shawna enormous latent power, but at the same time, resists the temptation to make her all-powerful. Here we have a protagonist who can’t simply wave a magic wand to make everything better. Though Karl tells Shawna she received training with Ygrair, Shawna doesn’t remember any of that, so her ability to access her power comes in fits and starts, by trial and error. Furthermore, she learns the consequences of that untrained power can cause injury, suffering or even death. This makes Shawna’s use of her power fraught with danger, and keeps her off-balance, constantly second-guessing herself. I felt that this type of protagonist was both more realistic, and more interesting, than an all-powerful superhero who can accomplish essentially anything with the wave of a hand.

One thing that Willett handles well is the incorporation of tension. Tension within the novel has many sources. First, there is the suspense of wanting to know whether Karl and Shawna will be successful in their quest, and whether—and how—they will elude the Adversary. There is also tension between Shawna and Karl, as Shawna is uncertain about whether she can trust him, particularly near the outset. There is the mystery of what happened to cause Shawna to forget, or suppress, her training. There is the ongoing uncertainty of whether Shawna’s use of her power will help or harm their cause.

I find with most books I read that there as positives, and things that don’t work so well for me, and in doing a review, I feel it’s only fair to would-be readers to give a sense of the latter as well as the former. For me, the main issue was that I didn’t connect with Shawna as well as I might have liked to. On an intellectual level, I could empathize with Shawna. In the opening section of the novel, she sees her best friend killed. She becomes a fugitive in her own world, and worst of all, the only thing she can do is run away. She is told she has tremendous power, but is uncertain how to go about tapping into it, and her fumbling attempts to do so often go awry. If I were to put myself in Shawna’s shoes, I’d be bewildered, angry, confused, uncertain, resentful—so many things.

And yet, I didn’t find I was able to connect with her character as well as I would have liked. Two possible explanations come to mind. One is that Shawna uses a fair bit of sarcastic humor, which is fine in its own right, but tends to push away emotion. Second, perhaps because so many of the emotions she is undergoing are negative ones, for much of the time she doesn’t give off a positive vibe. So while I was rooting for her to be successful in her mission, I didn’t feel the same connection with her as I have in other books or stories where I find the protagonist to be more likeable, or sympathetic. I also wasn’t as sold on the final few scenes of the book as I might have liked. I felt the ending part might have been condensed a bit without harming the overall arc of the story—but that’s just my viewpoint.

Worldshaper is billed as the first in a new series. With so many Shapers and worlds out there to explore, there’s lots of real estate to cover and lots of creative space for Willett to play in. At the same time, we would expect some of the suspense from the first story will carry on, as Shawna tries to find out why she can’t remember any of her training, the Adversary continues his pursuit, and Karl and Shawna continue to strive toward their ultimate mission. So the good news is that if you read, and enjoy, Worldshaper, you’ll have more to look forward to in the future.
Posted by Djibril at 17:03