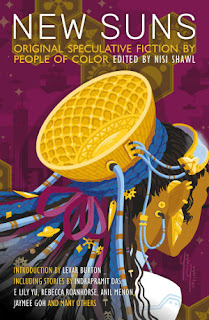 In her Afterword to New Suns: Original Speculative Fiction by People of Colour, editor Nisi Shawl explains the genesis of this anthology as stemming from a thwarted suggestion, years ago, to have a class of the Clarion West Writers Workshop consist of all students of color. Other committee members opposed the idea, including one who argued that they would “use them all up” in a single year and therefore it made sense to spread out nonwhite attendees for other years. The persistent belief, reflected in this account, that SFF is a genre primarily by and for white people has only recently begun to be dismantled, making collections like this one both a celebration of POC writers and a useful remedy for readers. The book is also firmly reflective of the political moment in America, going beyond the crises in popular culture from Racefail to Puppygate, with veiled (and not so veiled) references to Trump’s demagoguery and other sociopolitical tensions. The collection also encompasses both fantasy and science fiction stories, providing stories that hint at hope and at dystopia.

New Suns opens with a brief Foreword by LeVar Burton, who is perhaps best known for his dual roles as the host of Reading Rainbow and proponent of literacy, and as playing the character Geordi LaForge on Star Trek: The Next Generation. Burton meditates on his love of the short story form and on genre more generally, noting that


The exploration of space and our eventual close encounters with other intelligent species will require us to leave our “colonizer” mentality behind and embrace an attitude of openness and humility we have yet to cultivate, let alone master. When a world leader advocates for the creation of a militaristic Space Force to exercise “dominance” in the heavens, we are moving further than ever from Gene Roddenberry’s United Federation of Planets. (10)

Indeed, the notion of decolonization is a critical subtext (if not text) of the volume, with many of the stories and their authors coming from non-Anglophone or Euro-centric contexts.

There are seventeen short stories in the book, and while they are all very strong, I will only discuss a few here. My personal favorite is a story that will haunt me for a while: “The Freedom of the Shifting Sea” by Jaymee Goh. Taking place in contemporary Malaysia, it is the story of a mother, a daughter, and a “mermaid” named Mayang. Instead of the usual fish tail, Mayang has the articulated body of predatory marine worms; the Eunice aphroditois species is referenced in the story, and a brief Google brought new and appreciated layers of the story to me. This story confronts colonization and the climatological genocide inherent in climate change in fascinating ways in its handful of pages; it is simultaneously perfect and yet I wish it were much, much longer. Minsoo Kang’s “The Virtue of Unfaithful Translations” is a delightful secret history told in the form of a historical anecdote, complete with citations and an extended marginal note. It retells a great war that wasn’t through the unexpected love story of two translators who find that a costly war can be averted through the use of unusual diplomacy and a certain freedom with translation. Presenting the story as a historical account sans dialogue lends it a verisimilitude that is incredibly appealing.

“One Easy Trick” by Hiromi Goto is more like magical realism than speculative fiction per se. In this story an overweight woman, Marnie, goes on a hike and abruptly loses her belly fat. The belly fat is an autonomous being who, feeling unappreciated, decides to go off with an appreciative bear instead. I was reminded of the Doctor Who episode with the “adipose” aliens, but under the amusement of this story’s premise is a darker story about insecurity and abandonment. Losing the fat does not improve Marnie’s life; indeed, she is left alone in the forest and seemingly determined to get the belly fat back in a rather different way….

“Come Home to Atropos” by Steven Barnes is a darkly comic satire told through the shooting script and notes for a commercial advertising euthanasia services for the elderly by way of a Caribbean vacation. Barnes manages to compactly combine the history of the transatlantic slave trade, late-stage capitalism, the pharmaceutical industry, the ongoing tragedies of tropical islands receiving no aid in the wake of ever-increasingly devastating hurricanes, and Greek mythology in a tight marvel of a story. Similarly, E. Lily Yu’s “Three Variations on a Theme of Imperial Attire” retells Hans Christian Anderson’s famous fable of “The Emperor’s New Clothes” for the age of social media and political figures. (It is utterly transparent who the misbegotten “emperor” is modeled on.) The story concludes with the beginning of the inevitable revolution, and the question of whether things will indeed change.

New Suns begins with an epigraph quoting Octavia Butler: “There’s nothing new under the sun, but there are new suns.” It speaks to the current issues preoccupying genre, and even the mainstream, today. Despite our hellscape reality, SFF is in something of a new golden age: For every space cowboy opera there is now one, if not more, volumes exploring non-European settings, queerness, and racial politics. New Suns does all of the above, showcasing contemporary talents with a purpose, and doing so extraordinarily well. This book is one of the strongest anthologies I have read in years, and I highly recommend it!
Posted by Djibril at 12:05