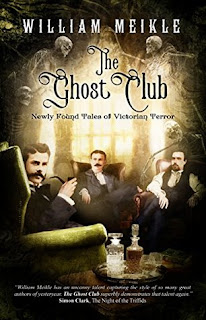 The Ghost Club by William Meikle is an unusual collection of ghost-themed short stories, that is something in between an homage and a divertissement. The idea behind the book is quite bold, but also very endearing: each of the stories here gathered are written by one single author, but in the style of a different famous writer of ghost stories of the past (mostly, but not only, from the British Victorian era). In other words, it is a collection that pretends to be an anthology. The explicit fakery is one of the things that attracted me to the book in the first place. Editorially, the stories are presented as if they were written by authors such as R.L. Stevenson or Bram Stoker. In this way, Meikle actually combines two of my passions: falsification and ghosts. How could I resist?

The stories are loosely encased in a very traditional narrative frame, where the various authors meet up for dinner and entertain each other sharing tales, exactly how it happens in so many of their own works. The frame-story is very weak and it is more of a pretext to move from one author to another than anything that has any actual narrative aspiration, although, in a couple of occasions, the stories became encapsulated in each other. The setting of the historically-impossible dinner reminds very much of the atmospheres attributed to those gentlemen’s clubs that were so common in Victorian times. This literary flavour was maybe foretelling of a certain misogyny that, unfortunately, spoilt for me the pleasure of reading. In the first place, the selection of the authors felt very biased. It is undeniable that the vast majority of the 19th and 20th century writers of ghost stories that are still famous today are male. And I understand that the point of this book is exactly to write in a literary style—and according to the tropes—that make the story feel “familiar” to the reader. I get that. At the same time, I found surprising, and disappointing, how Meikle ended up ignoring some quite major players in the Gothic literary scene like Charlotte Perkins, Edith Nesbit or Edith Wharton. The presence of female writers is marginal, with only two women authors in a list on fourteen. And the quality of those two stories is also a bit debatable: Helena Blavatski was actually a spiritualist more than a writer; and Margaret Oliphant’s (fake) contribution is confined to a story where everything is about pregnancy and motherhood. It is also the only story that has a female protagonist. The scarcity of women writers in this “anthology” is not only casual misogyny, but particularly inaccurate and misleading. There was a prolific market of Gothic literature written by women and read by women in Victorian Great Britain. So much so that, at the time, ghost stories were usually considered as a thing “for women” (how the tables have turned!).

Leaving aside the shameful under-representation of the many and excellent women writers of ghost stories, the book itself was a pleasant and amusing read. I was quite familiar with many of the authors included in the made-up anthology, but I have read them mostly in translation, so I wasn’t probably the best-suited reviewer to catch how convincing the fakery was, but still it worked well enough for me. The frame-tale assigns some sort of ideal leading role to (the character of) Stevenson, and opens with a story inspired by his style and literary tropes, “Wee Davie Makes a Friend.” It is a short but well-crafted story, about a bedridden boy who befriends a haunted toy (or the other way round?). Following Stevenson’s literary tradition, the real protagonist, the sentient tin soldier, is a creature that is able to provoke in the reader a mixture of disconcert and tenderness. The parade of writers proceeds with Kipling, and a story that is, predictably, set in India, at the time the place was part of the British Empire. We then meet Leo Tolstoy with another short adventure, “The Immortal Memory,” that, as the great Russian writer would have probably loved, revolves around the disparities between different social classes, and the clash between a clueless nobility and a struggling working class. Unfortunately, across the anthology, the homage starts morphing into parody, and the familiarity into predictability.

The story written in Bram Stoker’s style, “In the House of the Dead,” is quite enjoyable, and, luckily, doesn’t feature any vampyre but a strange house where it is possible to meet again the people that one has lost. The feeling of a tale à la Stoker is achieved through an epistolary structure that reminds, without repeating too much, the well known letters exchanged among the protagonists of Dracula. Another story that I found particularly entertaining was “Once a Jackass,” the one in the style of Mark Twain: full of action, very dark and with a good twist in the middle of the plot.

The stories in the middle of the book were perfectly readable, but not particularly memorable. Also, many of them are packed with misogynistic and colonial stereotypes that quite bothered me. The last two stories revived my attention. “To the Moon and Beyond” is written in the style of an author that was very dear to the adolescent me, although, to my knowledge, he didn’t write any actual ghost story himself: Jules Verne. Quite predictably, the plot involves a trip to the moon. The science is almost ridiculously inaccurate, but the touch of horror is very nicely and unexpectedly introduced. The last story is by Arthur Conan Doyle, who, although not famous for writing about ghosts, did try his hand at the genre, and was also a fervent spiritualist. “The Curious Affair on the Embankment” merges crime investigation with supernatural mystery, choosing as protagonist not the over-celebrated Sherlock Holmes but the often neglected Inspector Lestrade, chief of police at Scotland Yard.

This book is based on a delightful and fun idea, and shows the genuine enthusiasm of someone who, like me, grew up voraciously reading these authors. It is a light read and will make those who are familiar with the copycated writers smile often. However, I had the impression that a stricter selection would have benefitted the collection. I understand the temptation of adding one more different writing style, but fewer stories, and only the strongest ones, would have maybe made this book not only an enjoyable experiment, but actually a good and satisfying collection per se. I also cannot get over the disappointment of the selection of authors, that mirrors all the biases of the modern publishing industry instead of taking this chance to clarify that the Gothic literary scene in Victorian times was more diverse than modern anthologies make us believe. Last, I believe that a bigger effort could have been made into replicating the style of the writers without perpetuating their gender and race stereotypes.

In conclusion, the value of this book seems to be found in the project as a whole more than in the single stories. This doesn’t mean that there are not some very good ones in there, and I applaud the creativity, the dedication and the sense of humor of an author who was able to pull off this idea!
Posted by Djibril at 11:41