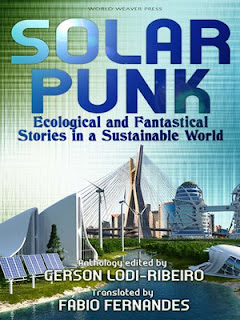 Solarpunk is the latest in a series of themed anthologies—previous installments include Vaporpunk (2010) and Dieselpunk (2011)—edited by Brazilian SF author Gerson Lodi-Ribeiro. First published in Portuguese in 2012, the English edition was funded through a Kickstarter in 2017, and it provides an intriguing window not only into Brazilian genre writing but into the complicated politics of sustainability. “Solarpunk” as a genre has emerged in the 2010s as one of numerous forms of climate fiction, even as climate reality continues to change and converge a number of preoccupations. It has also promised a form of optimism at odds with popular dystopia, managing to combine hopeful science with a cynicism regarding human nature itself. As Sarena Ulibarri notes in the preface, while Americans view even the idea of a world economy of renewable energy as inherently utopian, in other countries it is a matter of necessity and survival: Brazil is one of the world’s leaders in renewable energy with 76% of its energy drawn from wind, solar, and hydropower, but it is far, far from being a liberal utopia. Consequently, the stories collected here run an emotional and genre gamut that is highlighted by the accompanying art work by José Baetas.

Several stories make use of dark humor to get their points across. ‘Soylent Green is People!’ by Carlos Orsi is a murder mystery which follows a private detective investigating the death of a biodiesel engineer and the disappearance of his aged mother. As one might guess from the title, it goes about as well as one might expect. Similarly, Telmo Marçal’s ‘When Kingdoms Collide’ reads almost like a satire, envisioning conflict between humans and human-plant hybrids called Greenies for their chlorophyll-containing DNA. The unnamed protagonist narrates both events and fury after the Swiftian murder of his girlfriend. ‘Sun in the Heart’ by Roberta Spindler is a smaller, more intimate story that likewise plays with the possibility of hybridizing human DNA, but more seriously. It concerns a family that faces the question of whether or not a beloved son is still human when he is, functionally, mostly a machine. It concerns the invention of nano-implants that convert solar rays into “photonutrition,” preventing the increasing numbers of cancers in an overheated world and solving the problem of diminishing food resources. Given the big questions asked in this brief narrative, they are too tidily answered, or not at all.

Other stories avoid tidiness altogether, and revel in it by playing with narrative conventions. ‘Breaking News!’ by Romeu Martins is presented largely as a transcript of online radio programming during one long night of protests and riots at a genetically modified organism greenhouse/factory plant. ‘Once Upon a Time in a World’ by Antonio Luiz M. C. Costa plays on similar themes, in which the politics and violence of the digital world crossover into the real one during an act of terrorism. Both stories are so near-future (per 2012) as to have elements that are familiar at this point. Gabriel Cantareira’s ‘Escape’ is a brief action tale in which the daughter of a tech conglomerate’s president is willing to join with “terrorists” to limit access to a manipulative new technology. The story told in the media is at odds with the reality, presenting the narrative as a “secret history” of someone at the right (or wrong) place at the right time.

André S. Silva’s ‘Xibalba Dreams of the West’ is another story that plays with time, this one by reimagining the rise and fall of the Mayan nation as a tale of the future rather than of the past. Religious mysticism combines with the modern security state to create a culture in which political dissidents are executed as sacrifices, but the problems of unsustainable resource and overpopulation remain. For a short story, it packs a lot of world-building and deft reasoning into its pages, and was my favorite of the bunch by far. ‘Gary Johnson’ by Daniel I. Dutra doesn’t go quite as far in its exploration of religious themes, but it is just as fascinating. It is also the most overtly fantastical of the collection, concerning efforts to prove the existence of the human soul—and how those efforts culminate in attempted genocide and murder as told through the letters of a former priest.

‘Cobalt Blue and the Enigma’ by Gerson Lodi-Ribeiro is the final as well as the longest entry in the collection, a novella told in nine short chapters. It plays with a number of elements familiar to genre fans, from high-tech armored exoskeletons created by the military-industrial complex for quadriplegic soldiers, to a space-faring culture with outposts on Jupiter and planned missions to Alpha Centauri, to a hunt for a seemingly supernatural creature. In many ways it is the most conventional story in the book, but in invoking so many of familiar, even beloved, tropes of genre, it brings us full circle, engaging with and highlighting the contributions of all the authors to this book.

Solarpunk is a wide-ranging collection of new Brazilian writing in translation, and for that by itself it would be a worthwhile read. That it tackles numerous aspects of and speculations on sustainable energy, renewable resources (or the lack thereof), and digital culture make it an incredibly pertinent volume for our world right now. Read it right this minute if you can; if you miss it, you might already be living in it…
Posted by Djibril at 14:40