Johnstone, How I Learned the Truth About Krampus (2017) 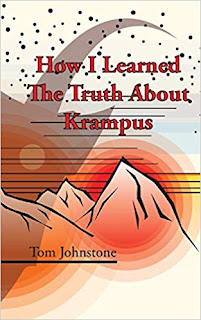 A young academic researching folkloric traditions becomes fascinated by the figure of Krampus, the horned monstrous companion to St Nicholas who, in Austrian tradition, punishes naughty children. We are reading his letter to his wife, written as he is awaiting arrest: their baby has disappeared; and the narrator is attempting to explain (and/or justify) what really happened following his trip to Germany to follow up the work of an expert on Central European folklore whose work was excluded from the most important work on traditional folk performance customs. He learns that Holger, the German academic had, apparently, strayed too far into the territory of "what one might call cryptozoology." Holger's former partner Claudia takes the narrator into the Tyrol, where they find Holger's tent and a weird, intricate carving which he takes back to England and gives to his fiancée. After their marriage, dreams of her "straddling" the monstrous carving, which sometimes bears the face of the narrator's friend Mike, sometimes his own face, haunt him. When their child is born his wrinkled skin and deep black eyes remind him of something he saw in Germany. The police have their own theory…

On the surface, this is a simple, somewhat Lovecraftian story. Its undercurrents last rather longer in the memory. Its curiously restrained narration reveals much when unpacked, and not all of what is revealed is a straightforward explanation. Johnstone has an ingenious line in ambiguity and sentences that burst with revelatory meaning after they have swirled around the consciousness for a minute or two. Unfortunately, this means that some of the most quotable lines, the ones that allow you to establish a backstory and a psychological context for this account, scream "spoiler". What can be said is that for a small-size 36-page short story, this packs a lot of emotional punch. It's sometimes said as a kind of damning-with-faint-praise of a short story that there's a whole novel within it, but while that may be true here (I can see ways in which the story could be expanded to much greater length), this is a perfect lyric rather than an edited epic. We finish the story and allow its implications to dawn upon us, and they are, I think, quite devastating. It's not quite certain what the "truth" about Krampus is, but if I read the final two paragraphs of the story correctly this is one of the bleakest and saddest confrontations with the abyss that I have read in a long time, and I would be very curious to read more by this author. If I am wrong-why, then this is still a superior story in the folk-horror mode. A win all round!
Posted by Djibril at 16:01