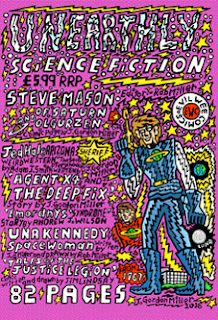 John G. Miller, editor-in-chief of Braw Books describes himself as an underground maestro and comics mastermind. This ‘one shot’ foray into science fiction promises ‘startling stories and comic strips from Andrew J. Wilson, Ian Wark, Malcy Duff, John Rafferty, Simnel and Adam J. Smith with striking space illustrations throughout by Neil Beattie and Rob Miller.’ It’s got a hand-drawn feel to it, evoking the luridly coloured science fiction mags of the sixties, which I am just old enough to remember.

The quality of the fiction is good, particularly the dialogue which is zippy and true to life. My main feeling is that the fiction is very short, so short that the ideas have scarcely space to develop. Each one seems more like a fragment than a fully formed piece. I think a few more long stories (i.e. more than two or three pages) would have helped to give the magazine more depth. Also, the fact that there are 26 pieces of fiction and comic strip but only ten authors gives this collection less variety of theme and style, but there’s clearly a lot of talent here, helped along by the amazing illustrations.

In some ways the fiction is all too earthly, collectively the stories evoke a grungy, malfunctioning world, disturbingly similar to our own in which the characters wrestle with the pointlessness of life or are consumed by ambition or bitterness. Occasionally these edgy prose fragments sit uncomfortably with some of the more peppy comic strips. Celebrity merchandising, dodgy franchises, computer hackers… money and its evils seem to dog the progress of more than one hero in these pages. Whatever progress science may have brought, society still seems to be gripped by anxiety and the all-consuming desire for wealth, celebrity and lost youth. And there seems to be a Sisyphean inevitability about it all, summed up by John Rafferty’s ‘Rebirth Anew,’ which, again, is sadly too brief to contribute anything new to the topic.

Several stories are dedicated to the 1960s children’s science fiction series Fireball XL5. The stories are set in Lanarkshire or its off-world replica, which gives them a distinctly tongue-in-cheek flavour. The plots feature robots, characters from the series and others who seem to have been plucked straight from the streets of a grimy Scottish city on a Saturday night. Plenty of casual violence, vomit and local dialect.

Other stories hover between a kind of grungy present-day realism and something suggestive of an equally grungy interplanetary future. Perhaps this is precisely what we are heading for: a space age where nothing works properly and people are still subject to the same whims, fears and hopes as ever. ‘Maria 3’ by Rob Miller captures this sense of a tired, celebrity-obsessed future where people sit around in space ports (airports) in utter tedium, picking over the details of their sorry lives and staring at stains on the carpet. Not much change there, then.

Rubbing shoulders with the space cartoons we find stories on the themes of ambition, disappointment and financial gain that really could be set in any part of the world where technology governs people’s lives. ‘The Response’ by Simnel, reads less like fiction than a recording of a meeting in the movie business in a world indistinguishable from our own. In similar vein ‘Official Merchandies’ by Rob Miller examines the possibility of lucrative financial gains following celebrity deaths. ‘The Promotion of Jens Anderson’ by Rob Miller is suggestive of Huxley’s Brave New World with its hierarchical society but it’s also very much a contemporary tale.

Of the stories that do aspire to more identifiably unearthly settings, an intriguing example is: ‘The Transmissionary Position’ also by Simnel. It’s an exploration of sexual and religious attitudes in the age of space exploration and interspecies fraternisation. It takes the form of a dialogue, which draws in our attention without relying on spaceships or other obvious science fiction tropes. There’s a sense both of historical depth and powerful forces at work in this well-written piece.

One of the most memorable pieces in the collection is the scatologically-themed ‘Splashdown One’ by Adam J. Smith which is actually a story rather than a fragment. Though brief, it takes the idea of conceptual art to new heights, or depths, with its tale of an artist nervously awaiting the unveiling of his latest installation which turns out to be an unexpected triumph.

‘Emordny’s Syndrome’ by Andrew J Wilson is another strong piece about the effects of a mysterious affliction, bursting with ideas and potential for development but hurriedly concluded.

‘FUP in Space’ by Rob Miller features the diary of a young woman who seems to have slept with most of the male members of crew during a space voyage. After a series of deaths on board, her log is quoted as evidence. The writing works here because the voice of the woman rings true. Strong characterisation also helps in ‘The Pod’ by Ian Wark, about a spaceship threatened by a black hole. This happens to be one of the more resolved of the stories in this collection, benefitting from its length.

One of the magazine’s decided strengths is the artwork that accompanies the fiction. It’s not often that illustrations complement fiction so well, but here they do and they help to give the magazine a unified look. There’s also some trippy stand-alone artwork between the stories that also works well.

The comic strips add variety to the graphic content and some pretty wacky ideas abound, including an infestation of pteranodons in 1870s Arizona. There is a very nice wordless strip: ‘Two Headed Fish’ by Malcy Duff who seems to have a bit of a cult following. The least confident of the comic strips features Batman and Invincible Man saving the world. This has a kind of hand-drawn charm as though it’s been scribbled in biro on lined paper and scanned in which I suspect is close to the truth. It looks like a piece of work long dormant in somebody’s bottom drawer since schooldays which has finally been dragged out into the light of day.

So, is this the underground science fiction that the blurb promises? I think it’s a funny and innovative stab at the genre. There’s a refreshing lack of slickness about it and a likeably enigmatic quality to much of the fiction. The collection may appeal less to those seeking escape from the familiar in exotic off-world locations and more to those who enjoy an intelligent and irreverent glimpse into how humanity may grapple and grope its way onwards. In the conception of these authors, we may head for the stars but we’ll be taking along all the trappings of dysfunctional late capitalism. Of course, you could just look at the pictures and enjoy the easy resolution of a dastardly plot to destroy the planet foiled by the likes of Una Kennedy or Invincible Man.
Posted by Djibril at 13:00

Thanks for this excellent, in-depth review. That's about as accurate and insightful an assessment of the themes and aim of our wee book as we could have hoped for. Much appreciated! Any intrigued shoppers can grab it online here - http://www.lulu.com/shop/various-artists/unearthly-science-fiction/paperback/product-23301035.html Best wishes, Rob.