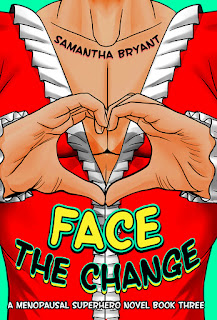 When I read that Face the Change was a “Menopausal Superhero” novel, I was intrigued enough to request a review copy. After all, menopausal superheroes aren’t something you run across every day—although the concept sounded like fertile ground for putting characters into new predicaments and leveraging age-related humor.

The first character the reader meets is Cindy Liu, who is on the run in a stolen car with her body-hopping father Anton in the back seat. Bryant piqued my curiosity with her description of Cindy as having “the driver’s license of a sixty-seven-year-old scientist and fugitive of justice and the visage of a thirteen-year-old Eurasian girl.” (6) We learn that Cindy has managed to reverse the aging process, but aside from the obvious benefits, Cindy is finding that the resultant change has its drawbacks—such as the need to behave in a manner consistent with outward appearance, in order to avoid arousing suspicion.

In subsequent chapters, fire-throwing Helen Braeburn, strongman Leonel (formerly Linda) Alvarez, Jessica “Flygirl” Roark, and Patricia “Lizard Woman” O’Neill enter the story. Each of these characters has been transformed as a result of using treatments developed by Cindy Liu. The phenomenon is so widespread that there’s a term—”Liu-vians”—for the unfortunates so affected.

Cindy isn’t the only one whose workings have had strange effects on her patients. A group known as “The Six”, whose unusual abilities are an offshoot of neurology experiments at Bethesda Hospital, are also creating havoc. Archie Matheson can “influence perception” (103), while Agatha Corman bends people to do her will. Other members of The Six have powers of mind reading, foresight, remote viewing, and the ability to hypnotize others with the sound of their voice.

Charged with trying to keeping the peace is the mysterious Department, “a private covert operation, subcontracted at times to the US government but operating independently” (160). Led by the chameleon-like Director, whose physical appearance takes on different attributes in the eye of the beholder, the Department handles “cases beyond the expertise of normal outlets” (160).

As the novel progresses, the various groups are working at cross purposes. The Six, led by Agatha Corman, engage in thefts and other illegal activity. Flygirl, Leonel, Sally Ann Rogers, and Agent Gabe Driver are aligned with the Department. Meanwhile, Patricia wrestles with the decision of whether to join them or remain independent. No fan of their efforts, Helen Braeburn has only one thing in mind—exacting revenge on Cindy Liu. And Cindy, in turn, wants to save her father and regain her stash of emeralds, while not risking her own hide in the process.

Bryant chooses to tell the story through multiple narrators, with six different individuals carrying the tale in turns. This tactic enables Bryant to build suspense, and also enables strong character development, by giving a deep insight into what’s going on in multiple players’ minds and hearts. The counterpoint to that from a story-telling perspective is that the multiple-narrator approach and the deep dives into the characters’ psyches temper the pace at which the story moves. As a reader, it was a trade-off I was willing to make.

The “science” within the novel is soft rather than hard. Special properties of the emeralds with which she experiments drive the outcome of Cindy Liu’s experiments, but even Cindy doesn’t totally understand how or why they have the effect they do. Meanwhile, Cindy’s father Anton has engaged in “body hopping” by transplanting his brain into new hosts—although we aren’t given much detail about how this works. As for the special capabilities of the Liu-vians and The Six, we don’t know exactly what mechanism created those abilities, simply that they have them.

If the science is somewhat surface, you can’t say that about the character creation. One of Bryant’s strengths is creating a strong cast of three-dimensional people. Flygirl, Leonel, and Lizard Woman display a blend of positive and negative traits, and face their own internal struggles and conflicts. Leonel, whose conversion from Latino grandmother to strong-man has resulted in a new-found sense of purpose and meaning, must decide whether he will continue his dangerous work with the department against his husband David’s wishes. Though he wants to keep both his career and David, he knows it might not work out that way. In a very human manner, he tries to put off the discussion with his husband as long as possible, even though he knows it needs to happen.

“Flygirl” Jessica, a single parent with two sons, has mixed feelings about re-entering the dating world, and must deal with her mother’s fear that her work will endanger her family’s well-being. Patricia, aka the “Lizard Woman of Springfield”, struggles with her own tendency to go it alone rather than working as a team, and this results in negative consequences. Even Cindy Liu, who exemplifies less-than-model-citizen behaviour, has some redeeming qualities. Bryant notes that “Cindy wasn’t above using people for her own ends, but there were limits to how far she’d go” (71).

The novel contains many scenes of conflict—some large, some small; some internal, some external—through its pages, which helps to maintain reader interest and promote a sense of suspense.

Diversity is one of the strengths of the novel. Bryant includes characters of different ethnic backgrounds, including Caucasian, Asian, Latino, and African-American. Leonel (formerly Linda) now finds himself in a man’s body, which adds a layer of complexity to his relationship with his husband of 25 years. The novel includes a lesbian relationship as well.

I always appreciate humor sprinkled into a work, and Bryant doesn’t disappoint in this regard. A couple of examples: “ ‘Knowing is half the battle,’ Sally Ann whispered to herself. She wished she knew what the other half might entail,” (221) and “Cindy wondered if there was an Olympic contest for stupidity. If so, she was about to win the gold medal” (237).

Sometimes, the situations described were funny because of the reader’s ability to identify with them. Sally Ann’s finding that “repeatedly checking her phone did not make Gabe check in” (59) provides a moment of recognition for any readers who have had committed a similar faux pas. Another “been there, done that” moment for me came when a couple of the characters are snooping around in a storage unit. Bryant writes, “Mary recognized the trend from her last move. After a few days of neatly labeling everything… she got frustrated with how much still… remained and pushed whole shelves of stuff into crates by sweeping it all off with one arm” (187).

Bryant’s observations about people, about aging, and about life itself added richness to the novel. While Patricia is looking in the mirror, Bryan notes, “no one would mistake her for forty ever again… There were lines deep in her face and looseness in her neck and arms that no amount of exercise seemed to tighten” (p. 166). Department operative Sally Ann Rogers states, “The business of secrets was half in keeping them, half in letting people think they already knew the truth” (29), while Jessica observes, “The literal truth didn’t matter much compared with the heart’s truth” (49).

Face the Change is the third in a series of “Menopausal Superhero” novels, but I found it a good read as a stand-alone. That being said, I can see where the reading experience might have been enriched if I’d been acquainted with the characters and the circumstances a little more deeply. Because I hadn’t read the two prior books, it took me some time to sort out the “good guys” (and gals) from the “bad guys.”

I did feel the novel would have benefited with slightly tighter editing. There were a few instances where the same word was repeated in close proximity. For example, “He was still staring at the ceiling watching the reflections of the hallway’s light slide across the ceiling…” (96), and “The call came in the middle of the night. Sally Ann had been asleep all of two hours, just long enough to have a hard time clawing her way out of bed to take the call” (53). In these two cases, repetition of “ceiling” and “call” respectively could have been avoided. There were also just a few instances of what I felt were awkward phrasing. Examples are, “the sob that rose up from the depths of him like the wail of a lost child” (9), and “her father’s pale face rose like some kind of vampire sitting up slowly from a coffin” (8).

That being said, there was a lot I liked about Face the Change. Bryant has woven an insightful, interesting, and humorous story with three-dimensional, enjoyable characters. “Coming of age” novels can be fun, but in Face the Change, Bryant demonstrates that “coming of a certain age” tales have their merits, too.
Posted by Djibril at 16:01