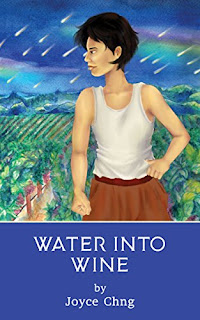 I wonder how the wine will taste. Will people taste the fear—the terror and anxiety—when they drink? A tart wine with hints of berry and blood? A spicy wine with cinnamon and gunpowder, great for a summer evening? (46)

Ping Xin inherits a vineyard on the planet Tertullian VI from her grandfather, and uproots his children and aging mother to start over after a divorce; his husband left when Xin decided to transition to male. (N.B. I’m using the pronouns “he/his” to discuss the character here; told from Xin’s point of view, no pronouns used to describe the character appear in the book until the end, but more on that momentarily.) Shortly after the move, the Secessionist War, a conflict between the Loyalists to an interplanetary Alliance and the Traitors who wish to leave, starts, and the sky is lit up by space battles far above the surface on a regular basis, while on the ground, life largely continues. Xin hires the mysterious and handsome Galliano, an experienced vintner to assist in the work of cultivation, harvesting, pressing, and bottling. Chng’s prose in these scenes is particularly strong, evoking both the heavy work required and the beauty that is working with living things. After a start and stop budding romance, Xin and Galliano become lovers, just as their world starts to come to pieces.

The “war” scenes of the book will be strikingly familiar to anyone who has watched the news of the last five years. Xin and his family try to maintain as normal a routine as possible, amid closed schools, alarm sirens and bomb shelters, and military on both sides that don’t hesitate to put landmines on country roads, shoot down civilian craft, or harass farmers for food or loot. Xin is repeatedly encouraged to leave but refuses: the vineyard, and Tertullian VI, is his home and all that he has. But through all this there are periods of normalcy, too, which are stressful in their own right, like bottling and selling the new wine, worrying over vine blight, or dealing with a rebellious teenage son who wants to join the fight.

Most of the time the war is a distant, unreal thing, even when its victims are dying in your arms. “We were not captains in heartless metal starships ordered to fire into the atmosphere of planets. We were not politicians who postured and spouted hot air. We were only civilians, trying to survive, trying to have decent lives,” Xin says at the end (133-34). Xin and his family survive, but at a cost: twice they have to kill soldiers who threaten their lives. The scenes of sudden and shocking violence are brief, but remain a shadow throughout the rest of the book, as one can never choose to kill—even in self-defense—and remain unchanged.

Xin’s transition comes up several times, especially when he is unable to get the hormone pills he needs as access to the town and to supplies are cut off. His periods restart; several times he is addressed as “ma’am,” though it’s unclear if this is direct insult or only ignorance. When a peace is declared at the end (which may well be only a temporary one), he declines to start taking the pills again, choosing to embrace a gender identity that is neither male nor female. “I give myself my own pronoun. I am qar. I am me. I am Ping Xin,” Xin says (138).

Water Into Wine is one of the most enjoyable reads I’ve had in a while; for all the seriousness of the subject matter, Chng has a light touch throughout. Xin’s point of view also credibly rewrites the common tropes of space opera: wars are very different on the ground and for minorities. But above all the story is suffused with hope and optimism, that the wars will conclude, and that the spaces we make for ourselves and for our families will continue.
Posted by Djibril at 15:25