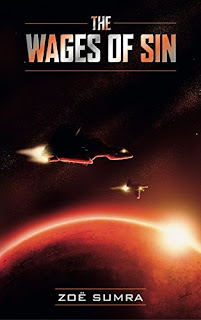 The Wages of Sin is the second novel by British SF author Zoë Sumra, published by the small speculative Elsewhen Press, a far future political thriller involving gangland turf wars on an ultra-violent, distant planet. While there is some genuine and well-sketched alienness in both the setting and the personae, much of the violence and organized crime in this novel are very familiar both from contemporary crime literature and indeed recent history. While the hallmarks of the small press sometimes show through in production quality, this is an enjoyable and largely effective magical space opera romp, which fully succeeds on its own terms.

The protagonist of The Wages of Sin is the petty gangland boss Connor, a not terribly likeable leader who nonetheless clearly thinks of himself as the good guy—his moral position on his gangster role (albeit dictated by his powerful witch bodyguard) is “no drugs, no slaves, no whores,” and so instead he is an arms dealer, not one of the most moral professions in any world. Connor’s main motivation for action at the start of this novel is the murder of one of his cleaners, apparently an unusual concern from a crimelord for such a lowly servant, but when he thinks of this crime throughout the novel it is in terms of the insult and threat to him and his organization’s reputation, rather than about the girl as an individual worthy of sympathy. Other major characters in Connor’s circle include distant cousin Yasmine, maternity-cover for his spellweaver bodyguard, invincible and apparently unquestionably loyal. Another cousin, Atalanta, is a crack spy, also seemingly invincible. An unwelcome guest, his widowed aunt Gisele, is a social high-flyer, arch and insufferable, and ritually untouchable because of her recently bereaved status. Connor’s brother Logan, the husband of his usual bodyguard, is absent from most of the novel as the couple expect their child on another planet, although we see and hear about him a few times, and he feels as though he should be familiar to the reader as well as the protagonist. Finally Thakar, another trader on this lawless world, seems to be Connor’s occasional boyfriend. They are surrounded by other employees and henchmen, including a disturbing number of child-servants (notably Joshua, a ten year-old, unfeasibly proficient assassin).

From a plot perspective, it feels a little odd that a small-time arms dealer should become so powerful a kingmaker as he does in the face of a planet-wide coup d’état. But then it also feels a bit odd that Connor has access to the apparently invincible spellweavers, child assassins, essential infotech, and all the rest, but his über-powerful enemies don’t. It may be that there are social and familiar reasons behind this otherwise inexplicable balance, but I feel I was missing some of the world background that could have made this clearer (on which more shortly).

In places the writing in this novel is a bit wobbly—the lack of a dedicated editor is especially evident in the early pages. A few lines stand out as in need of red pen, such as the following:


“I don’t know all technology inside and out.”
Was it Connor’s imagination that she stressed the ‘all’?

As a reader, I was unable to fathom what this question would have added to the preceding line of dialogue, or what this comment contributes by way of characterization to either speaker, and so it jolted me out of the narrative with a quizzical frown, staring at the page for long enough to lose patience with the page. The novel is also prone to short passages of distracting info-dump, for example telling us about the various social castes, empires and federations that serve as backdrop to this universe. Despite this, it was hard for me as reader to get a complete grasp of the universe we’re meant to be living in; a reader doesn’t need to know everything of course, but when you’re going out of your way to tell me lots of things, the details I still lack become painfully noticeable. Having said this, I was probably about halfway through this novel before I learned that it is in fact a sequel, continuing the story of Connor and Logan from Sumra’s previous novel, Sailor to a Siren (2015), so much of the above may be better explained in that book, and a reader of this second volume would find everything—especially the character relationships—easier to follow. (I can therefore definitely say, though, that this novel doesn’t wholly stand alone free of the series…)

These admittedly fussy criticisms aside, when the pace picks up in the second half of the novel, The Wages of Sin becomes a violent political thriller full of intrigue, action, high-tech warfare, intergalactic shenanigans and world-shaking catastrophe. From here on the unravelling of the plot is gripping, and the reader (even one like me who didn’t care so much for Connor as a protagonist) becomes invested in the outcome, and genuinely believes in the sequence of events and decisions that lead to a satisfying dénouement. No doubt the adventure will continue in the ongoing Underside saga, a credit to the Elsewhen Press SF line.
Posted by Djibril at 15:39