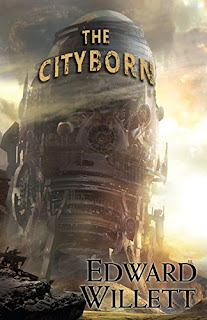 At first, Danyl can’t believe his luck. Raised by Erl in the Middens, the dumping ground for trash from the City that towers above, Danyl’s tired of the hardscrabble life. If only he could strike a lucky find that he can parlay into a city pass! That’s when Alania falls into his life. Alania has led a pampered life in the upper tiers of the City, reserved for Officers and the wealthy. But something goes terribly wrong and Alania ends up inadvertently added to a load of trash dumped from the topmost tiers of the City. When Alania drops from the City, screaming her dismay and enveloped in a bundle of cloth, Danyl sees her as a dream come true. Surely, he thinks, someone will want her back! All he has to do is get her to the Last Chance Market, and—

But it isn’t long before Danyl’s hopes are utterly dashed. Instead of landing him on Easy Street, Alania’s unexpected arrival creates turmoil. When Erl fills in just enough details to help Danyl and Alania understand they can’t afford to wait for the Provosts to come and find them, the duo are launched into a headlong flight that takes them far from the familiar confines of their very different homes.

Though pending disaster nips at their heels at every turn, Danyl and Alania take up a desperate journey in search of Prime, the cryptic leader of the Free Citizens, an underground organization with designs on overthrowing the City’s ruling elite. During their flight, they begin to glean answers to the questions that have plagued them. Why is the City falling into disrepair? Is the Captain really still alive? What’s the purpose of the cryptic Cubes outside the City walls? And what special attribute do the two of them share, that makes them the object of so much attention?

Willett stirs a sense of curiosity in the reader as the characters puzzle over these mysteries. Eventually all of these conundrums find resolution—although some of the answers become clear only in the final pages of the novel. Along the way, I made some conjectures as to what was really going on. Some of them turned out to be partially validated. Others were totally off base. I felt that Willett maintained a nice balance between giving the reader clues as to what was really going on, while maintaining a strong element of doubt as an incentive to keep reading.

I found Willett’s world-building in terms of the City and surrounding area engrossing. I particularly found the Middens, the trash dump beneath the City, to be an intriguing place. The imagery around Danyl’s life as a scavenger wending his way through piles of garbage while trying to avoid drawing the attention of rival gangs the Rustbloods and the Greenskulls isn’t something that’s easily forgotten. The description of the once-opulent Whitewater Resort, now occupied by members of the Free Citizens’ group, is also interesting. These places, clearly, are unfamiliar and yet there’s enough of an element of the familiar in them that I as a reader was able to create a clear mental image.

Willett provides a bit of everything from a science fiction perspective. There’s advanced technology, a different societal structure, and some inherent messaging within the pages of The Cityborn. Since Alania’s guardian, Lieutenant Ipsil Beruthi, runs the robotics factory, it’s not surprising that robots play a significant role in the tale. Willett’s novel includes nanobots endowed with healing powers as well as the ability to over-write memory, “doc bots” that can diagnose and treat injuries, “watch bots” that keep a wary eye or two on wayward children, and my favorite, a gardener robot (I could use one of those, actually). Cloning technology, human-AI interface, and artificial wombs all come into play as well.

The societal structure envisioned in The Cityborn is a hierarchy topped by the Officers, who live on the Eleventh and Twelfth Tiers. The Tenth Tier is a jail. Societal fortunes decline in accordance with tier number from the Ninth Tier down, with the denizens of the First Tier being the lowest of the low within the city. Only outcasts live in the Middens, which is why it makes an excellent place for Danyl to be hidden until circumstances propel him into action.

The Tier system works well for the officers, who live the high life. The position of Officer, we learn, is hereditary, and those in that position have no desire to upend the status quo. Unsurprisingly, not everyone is enamoured with the system as it exists, particularly since, for some unknown reason, the infrastructure of the city is deteriorating and no-one seems to care enough to do anything about it. With all of the power in the hands of a few, people in the lower strata of society have little to hope for or look forward to, and many of them chafe at the confining nature of the restrictions on their freedoms. The Free Citizens, led by the mysterious Prime, want to upend the status quo, but they need to work covertly to avoid landing in the Tenth Tier jail.

Willett gives us some points to ponder from an environmental perspective. The deteriorating City spews out garbage and waste into the canyon below. The Hazardous Waste Holding Tank has become a cesspool of mixed chemicals, and pollution of the river is what caused the Resort to be closed. But why have things been allowed to get to this point? That’s part of the mystery.

Willett tells the story through different points of view, with Danyl and Alania alternately picking up the narrative for the bulk of the novel. Seeing events unfold through their two sets of eyes gives the reader a richer perspective on the goings-on than focussing on only one character. Willett also gives us glimpses into antagonist First Officer Staydmore Kranz’s thoughts and reactions as the story progresses. We see Kranz’s concern, for example, about the declining health of the Captain, whose well-being is inextricably intertwined with that of the city. As indicators on the Captain’s medical readouts flip from green to yellow, and then to red, Willett notches up the tension. Using Kranz’s viewpoint also helps the reader understand quickly the pursuit is mounting behind the fugitives.

Snippets of the story are told from Erl’s viewpoint, as well as from the perspective of another character, Yvelle. This tactic provides us with information we would not otherwise be privy to. I felt Willett used viewpoint changes judiciously and in a way that didn’t risk the reader getting lost.

The Cityborn is a well-told story that moves along rapidly, yet not so quickly that the reader is unable to get a feel for what’s going on in the characters’ minds. Willett does a decent job of creating characters with depth and internal conflict. One example is Free Citizen Yvelle, who still has qualms about an action she took twenty years ago. Though First Officer Kranz is the antagonist, it’s also clear from his own musings that he believes the actions he is taking are necessary for the well-being of the City. On the flip side, some of the characters that I felt sympathetic toward near the start of the story proved to have less than honorable intentions. This mix of good and evil in the characters renders them more three-dimensional. Willett’s mastery should not come as a surprise. He’s written more than 50 books, under his own name as well as pseudonyms, and his novel Marseguro snagged the Aurora Award for best Canadian science fiction novel in 2009.

Unlike Danyl, you don’t have to bargain for a Pass at the Last Chance Market to get a peek inside the City. All you have to do is pick up a copy of The Cityborn. Within the pages, you will find an intriguing and boldly imagined world, but if I were you, I’d keep a beamer or a slugthrower handy. You know, in case you run into one of the Rustbloods while you’re rummaging through the most recent trash drop from the upper tiers…
Posted by Djibril at 16:31