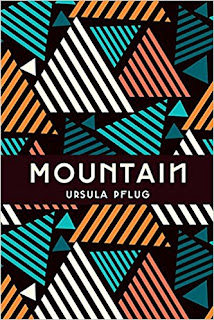 Pflug, a Canadian writer who resides in Norwood, Ontario, is an experienced author. Her previous works include novels Green Music and The Alphabet Stones, as well as short story collections After the Fires and Harvesting the Moon. She also has other short stories and novels in the pipeline. Inanna Publications released Mountain in May, 2017 as part of their “Young Feminist Series”. Mountain is billed as a “YA novella”. Without giving any secrets away, let’s just say I’m past the YA age. Still, I found Mountain to be an intriguing and thought-provoking read.

When Amethyst O’Connor, Mountain’s protagonist, clambers out of her mother Laureen’s beat-up truck and looks around the healing camp in northern California, it’s clear that this is the last place she wants to be. Hanging out with “several hundred people camped in a mud puddle with bad food and no medical” (p. 4) isn’t Amethyst’s idea of a good time—she’d rather be at the mall with her rock-star dad’s credit card. But unfortunately for Amethyst, her father Lark O’Connor is busy recording an album, so travelling with her mom remains her only option.

Laureen’s technical aptitude is the reason they’re here. She quickly gets to work setting up internet service for the camp. But if Amethyst thinks there’ll be mother-daughter bonding time once Laureen’s work was done, she’s in for a surprise. Promising to be back in a few days, Laureen presses a fifty dollar bill into Amethyst’s hand to tide her over. She tells Amethyst she’s headed for San Francisco, where Laureen’s boyfriend Peter lives. Left behind with an inadequate assortment of camping supplies, including a pair of too-small rubber boots and a leaky tent, Amethyst is left to navigate the uncertainties of camp life on her own. Fortunately, she’s been befriended by a young man about her age named Skinny, who provides a shoulder to lean on.

At the novel’s outset, Amethyst simmers with resentment against her mother. She’s mad at Laureen for bringing her here. She’s also upset that Laureen has headed off to meet up with Peter, even after Amethyst told her about the inappropriate advances Peter made toward her in the past. Hasn’t her mom been listening?

At first, Amethyst ticks off the days, struggling with boredom. Embarrassed by her given name, Amethyst tells people her name is Camden, after Camden Town, one of her dad’s hit songs. She limits her interactions with others at the camp with the exception Nan, who runs the makeshift kitchen, and Skinny.

As the novel progresses, Amethyst begins to change. She arrived at the camp with “fancy jeans and new Reeboks” (23), a name-brand phone that refuses to work out here in the bush, and a fresh application of nail polish. Under the spell of the mountain, Amethyst transforms from a self-centred, consumption-oriented introvert with few practical survival skills, to a more empathetic individual who can appreciate nature’s powerful beauty. As an indicator of her ability to take an interest in others, Amethyst embarks on a project of collecting some the stories of her fellow campers.

Gradually, Amethyst overcomes her resentment toward her mother. She also comes to realize that her father, who she has idealized, really can’t be relied on to be there for her when it matters. Fortunately, by the end of the novel, she’s learned to rely on herself.

It’s clear in reading Mountain that some kind of catastrophic event has changed society as we know it. But unlike many post-apocalypse novels I’ve read, Pflug doesn’t spend her time having the characters point out large-scale indicators of the change (Like, “Look, over there, another shattered building/burned out car/crashed airplane!”). Instead, she gives us tantalizing hints. Amethyst, for example, comments, “you notice good teeth now that they’re becoming rare” (12). Another character describes the way people “gathered from the edges of the burnt city” (37). Skinny comments that having parents will soon “be a bigger status symbol than top-tier Nike shoes” (45). There are numerous allusions to living as squatters, and using alternative energy sources. The closest we get to understanding the source of the upheaval is Skinny’s reference to a “Cli-Apocalypse” (72). Personally, I didn’t mind this approach. It kept the focus on the characters, and how they were coping with the new reality.

And just what is the new reality? It’s a world where rape and robbery can be a concern, particularly (but not exclusively) for women. This is not territory that Pflug shies away from. Rather, through the viewpoints of more than one character, we get insights into relationships, and how people can abuse power. In a world where safety isn’t a given, choices sometimes boil down to the lesser of evils. Notes one character, “we all slept with him, so we wouldn’t have to sleep with other people we didn’t like” (86). The right to say “no” and the need for a sense of self are among the themes tackled.

Despite the sometimes-heavy subject matter, Pflug employs an easy-reading style with several appealing features. There is subtle use of humor, such as Amethyst’s wry comment that manners are the “first thing to go, after nail polish” (25). There are insights about people, such as Amethyst’s observation, “everybody gets to be a jerk sometimes, but from what I’d seen of Skinny, he indulged less than most” (32).

Pflug also builds a strong sense of realism. Within the camp, characters deal with damp sleeping bags, mud, and less-than-ideal food preparation facilities. Having experienced tent camping as well as canoe trips, I could identify with the descriptions. On the flip side, the stunning beauty of the natural environment is also there for those who can appreciate it. Amethyst goes on a hike, and falls “into that walking trance; kilometres passing with my thoughts underfoot” (50). This type of passage will resonate with anyone who has had a similar experience, whether it’s getting into the zone while walking city blocks or hiking along a forest trail on a day when you feel like your legs could carry you forever. Pflug also captures the powerful of nature, when Amethyst muses that the Mountain is “like a dark strong rush pulling me down and up simultaneously, smelling of pine needles and snow” (58).

Though Mountain is not a novel of frenetic action, there’s a strong sense of mystery that pulls the reader forward. Why has Laureen been gone so long? What is it that Skinny isn’t telling Amethyst? What catastrophic event has led to so many kids being parentless, so many people living as squatters? I found myself drawn through the book in search of the answers to these and other questions.

Speculative fiction/science fiction aspects of the book from a technical perspective are mostly related to alternative ways of doing things. Characters discuss bicycle-powered sound stages, internet delivery via radio packet, renewable energy, and water purifiers, for example. From a societal perspective, the novel explores how people might cope in the event of a catastrophic change that removes many of the creature comforts we’ve gotten used to.

I often judge my level of engagement with a book by how quickly I work my way through it. Sometimes in doing reviews I need to discipline myself to complete a minimum number of pages per day. This simply wasn’t the case with Mountain. Short chapters (which for me tend to create a temptation to read “just one more”) combined with curiosity about the outcome pulled me through the book, which I finished reading in two sittings.

I felt that most of the book flowed nicely from a reader’s perspective. An aspect of the book that I was ambivalent about at first was the insertion of stories from other characters’ viewpoints, ostensibly told to Amethyst as part of her information collection project. On one hand, I felt this interjection of material had the potential to interfere with the flow, almost as if it were shoehorned in. On the other hand, it seemed a better and smoother way of delivering the information than having Amethyst recount it second-hand. As well, the material contained in the stories expanded on the themes of societal change and unhealthy relationships, so on the balance I understood why the technique was employed.
Posted by Djibril at 16:25