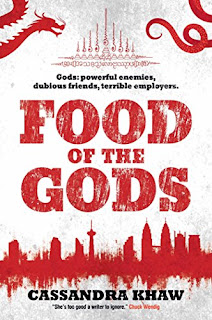 I finished reading Food of the Gods shortly after seeing the season finale of American Gods, and while some of the entries in Khaw’s collection were previously published, it’s hard not to think about what’s in the air that draws genre writers to recast myth in terms of the daily grind. (And I do know this isn’t exactly a novel idea, but these are the two texts that are on my mind immediately right now, so please bear with me.) Neil Gaiman’s original novel focused on gods-as-immigrants to America, with all the challenges that entails, as well as being a paean to steadily vanishing roadside kitsch; the TV series keeps the immigration story, but adds the violent intersection of race in contemporary America to the story that is, frankly, a blink-and-you’ll-miss-it element of the novel. Khaw is, like the younger Gaiman, a London-based writer, but unlike him she has her roots in Southeast Asia, and unlike American Gods, Food of the Gods goes back and forth between London and Kuala Lumpur. Her hero/not-hero (but not anti-hero) is Rupert Wong, a former gangster who has become a chef to the literal underworld to save his karma, such as it is.

The book is made up of three novellas, all of which take place in swift chronological order. ‘Rupert Wong, Cannibal Chef’ is perhaps the most straightforward story; it’s a murder mystery in which Wong is hired to investigate the death of the daughter of Ao Qin, better known as the Chinese Dragon God (who is also the patron saint of the South China Sea, a small detail of increasingly global relevance). The second story, ‘Rupert Wong and the Ends of the Earth,’ takes place shortly afterwards in the aftermath of that story, and sees Wong being hastily paid off to London to take up a new position as chef for a restaurant run by Orpheus and frequented by the Greek pantheon. This story is perhaps the weakest because it fills in the space between the previous and the final entries; there isn’t an overriding plot and the best moments are Wong’s interactions while traveling on a fourteen hour flight and his arrival at customs. The final story, ‘Meat, Bone, Tea,’ has a minor mystery plot and concerns what is functionally a gang war between the Greek and Chinese pantheons that Wong is determined to survive, one way or another. The book closes with a series of epilogues and endings that simultaneously tie-up loose threads and offer possibilities for future sequels.

Khaw’s sharp writing more than makes up for the occasional deficits in plot; Rupert Wong is an engaging smartass of a character you can’t help rooting for, and the sensory details of his cooking are incredibly vivid (and indeed, mouthwatering, at least until you’re reminded that he’s usually cooking that other white meat, human pork). His best moments are when interacting with his undead girlfriend Minah (who is, in case you are wondering, much more interesting and sympathetic than Gaiman’s “dead wife Laura”) and her demonic dead fetus, an ectoplasmic vampire that Wong nicknames George and regularly feeds from a cut on his wrist. Unfortunately, Minah and George are removed from the series early on, though thankfully not to fuel Wong’s arc, and the stories are weaker for it, I think. Wong is at his best when he has someone to riff off of, and it’s only in ‘Meat, Bone, Tea’ when two new characters emerge for this purpose: Fariz, a fellow human in this metaphysical underworld, and Nyarlathotep, a fictional creation of H.P. Lovecraft rendered real through the popularity of the Chthulhu mythos. This is a fascinating idea, and one I wish bumped more against our ideas of mythology: (some of) the Chinese and Greek gods appear with their family dramas more or less intact, and yet somehow still diminished. Would certain other members, like, say, Nike, not be more empowered in our capitalist and overly branded world? What about other fictional characters? Surely Elizabeth Bennet and Mr. Darcy would at least be demigods by now?

Ultimately, Food of the Gods is a fast and light read. I feel like the talk-back of Southeast Asian culture never did the work it set out to do, either in London or in Kuala Lumpur, but it nonetheless appears as a counter to the omnipresent Western narratives that tend to dominate Anglo-American genre writing like Gaiman, or more recently, Jo Walton in her Thessaly series, and that’s nonetheless incredibly useful in the ongoing conversations around representation and diversity in genre writing. Khaw’s voice is needed in our discussions of genre and myth, and I look forward to what she comes up with next.
Posted by Djibril at 16:26