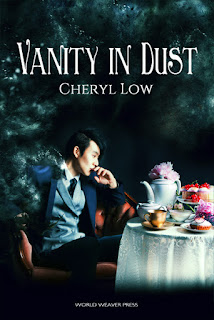 Vanity in Dust—the debut novel from Sweden-based American author Cheryl Low—is a decadent, violent fantasy that simultaneously revels in the beauty of high society elegance and sickens with representation of the immoral soullessness of the filthy rich. Set in an isolated kingdom that is a heavy-handed dystopian allegory for the lack of social mobility in our own world, the rich are literally immortal and the poor can literally be killed for sport, the only unforgivable crime for the upper classes is disloyalty to the omnipotent Queen. All the characters, rich and less-rich alike (there are no truly poor characters) are pretty unlikeable, even by the standards of the genre’s “decadent antihero,” and even as the reader eventually comes to care about the outcome of the mystery behind the plot, we never truly care about the people who drive or are affected by it. The writing is strong, the world-building and magical system inventive, and one may hope for a trilogy to follow that would deliver some of the promised disruptive rebellion against the system that is only hinted at in this novel.

Vaun is the prince of the kingdom only ever named “the Realm,” not an heir to the throne (in any case the Queen is immortal as well as ruthless) but a supremely privileged playboy, partying, fucking, drugtaking, and otherwise living the life of the magic-soaked libertine in the public eye and almost daily newspaper headlines. He begins the novel apparently oblivious to the ugliness of the world around him, impervious to the sufferings of Low people upon which his luxury is predicated, and barely remembering what his own face looks like without the expensive magical glamors he uses daily. Grayc is the prince’s valet, Low born, but now mingling with the royalty of the High city thanks to her employment and almost preternatural ability in keeping Vaun organized and safe from harm. Grayc has secrets, and there are hints she may be involved with an underground plot, but her loyalty to the prince is as unwavering as it is inexplicable.

The nature of the Realm is a bit mysterious, to its inhabitants as it is to us: shrouded always in grey skies and surrounded by deadly wasteland, there are no neighbors or competitors. Its every need is met by the use of magical dust, the powdered remains of roasted, fairy-like sprites that is infused in tea, in cakes, or smoked in cigarettes, and which keeps the people of High healthy, young, powerful, and entertained. The trade in dust is a preserve of the Queen, and attempts to synthesize the magic or break the monopoly result in disaster, or are crushed by the Queen’s Wolves, or both. The city is filled with casual cruelty, murder and torture alongside meaningless sexual licentiousness, gluttony and thrill seeking.

There are signs that this stable—if repugnant—state of affairs is more fragile than it might appear. Riots and murders occur in the Low (and even, rarely, among the High). Political machinations between the three noble houses of the Realm, although they cannot touch the royal family, are becoming more brutal and disruptive. The Queen tolerates everything except treason; chaos and suffering are merely entertainment for the privileged of the High. Over the course of the story Vaun begins to care, apparently a new experience for him, especially when his valued valet is endangered by events, but his character never quite ceases to be revoltingly self-absorbed, at least in this reader’s eyes.

There are occasional hints that people remember being able to see the sky; it is only a century ago when the people of High still had children rather than living forever, and not everyone is content with the status quo. The blurb suggests that there may be an undercurrent of resistance and even defiance rising in this novel, but they never actually materialize in the book itself. It is hard therefore to care about the outcome of a political thriller in which the choice is between cruel and repugnant nobles and vapid and privileged royals, and even the devoted and ruthless Grayc never quite tips over into the role of socially conscious activist.

It may be that a series, perhaps a trilogy, will follow from this novel, and deliver slightly more of the disruption and revolution that would make this dystopian world more palatable. As it stands however, Vanity in Dust is a rather heartless story, beautifully written, skillfully drawn, convincing and gripping, but leaving one feeling more sickened by the brutality of the world than entertained by escapism or sense of wonder. Perhaps not the read I was expecting, but a powerful and worthwhile one nevertheless.
Posted by Djibril at 15:42