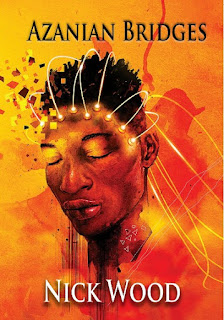 Early in Azanian Bridges, when the two main characters who are drawn somewhat against their wills into standing up against the political system which surrounds them first use the “Empathy Enhancer” which is central to the plot of this fast-moving thriller, there’s a significant moment which sets the tone of what is to follow and raises the book’s level of intelligence above the level of simply “fast-moving thriller”. Martin, a clinical psychologist who has co-developed a device which will capture, record, and interpret human thoughts, needs to know if it will actually work, and decides to test it on one of his patients: Sibusiso, a troubled young amaZulu student who has had a breakdown after witnessing the killing of a friend at a political rally.

The two minds merge. Sibusiso acknowledges that Martin is “mostly OK… a little more racist than you think, but a little less racist than I… worried” (p. 37). This ambiguity is underpinned by the image of “bridges”, particularly the rickety Umgeni Bridge which Martin remembers at one point as the location where he proposed to his wife—now ex-wife—Suzette, and also the place where he scrambled to safety “without pausing to help” (p. 44) when it began to sway. Bridges can be fragile and liable to collapse. They are also all we have got.

This is a South Africa which did not see the fall of Apartheid, and a machine which can actually induce empathy between individuals is dynamite. Soon, it is the focus of attention from the governing regime, for whom it could be a useful aide to interrogation, and the liberation forces, for whom it could be a tool to undermine and dismantle the system that keeps the regime in power. Fat, lonely Martin (at one point he admits to going to political meetings at least in part so he can meet women) is estranged from his Afrikaaner family for his liberal views, but his nerve is shaken by a visit from a security agent. He damages the Box to prevent its use, but this is only a temporary measure. In a scene of comic pathos, we see what Security is prepared to do to obtain it. But Sibusiso, an altogether stronger character despite his youth, is offered—and takes—the opportunity to act against the regime, and steals the Box, smuggling it to Zambia where it is reverse-engineered by Chinese-backed technicians and turned into an “Empod” where you may score points for successful “empathising.” Used in this fashion, claims Sibusiso’s friend and revolutionary mentor Nombuso, “If you can connect to anyone, regardless of race, and see how similar we are, how we share so many hopes and dreams, this will negate the skin, making so-called race and colour irrelevant” (p. 104).

This is not, however, a simple “advanced tech dismantles dystopia” story. Sibusiso in particular is someone we have empathy with right from the start (Empod or no Empod) as we see him first embittered by the life he has to put up with and grasping the opportunity to do something about it. His attraction to Nombuso on a personal and political level is part of his growing maturity. He begins to understand much about himself, and his relationship with his father. His insight about Martin—a beautifully-drawn liberal (and I do not mean “liberal” in any pejorative sense: his learning process is important too)—sharply sets the dynamic which Martin spends most of the rest of the novel beginning to understand. There is a particularly telling sequence late on in the book in which both men are interrogated by the same security officer. One can make a telephone call to a high-powered lawyer. The other—cannot.

Told in scenes which alternate between the viewpoints of the two main characters, Azanian Bridges allows both protagonists to speak to the reader and allow the political issues to come forth through sharply-observed settings and conversations. The alternative-history element of the novel is well-drawn and delivered with a light touch: both the fragility of Apartheid in a modern world and the resilience with which it (and, in our world, its legacy) clings on is emphasised. The Empathy Enhancer/Empod is equally neatly presented: a typical piece of science-fiction tech which works as device within the fictional world and metaphor for the world of we readers. (There is a cunning echo, conscious or otherwise it hardly matters, of a line in William Gibson’s Neuromancer which similarly highlights the role of shiny, strokable tech.) While it drives plot to the extent that we have to make sure to keep our eye on what else is being said (there is a point at which I felt that the action of Brand, the security officer, defied logic: on a second read, what happens make sense from the global viewpoint of the authorities), it is not presented as some sort of magic panacea. As we read from Sibusiso’s insight into Martin, it does not remove barriers: it simply allows the possibility of a fragile bridge. It is still up to human commitment and endeavour to take the necessary action and attempt to shore up those bridges. While the focus is upon Sibusiso and Martin, the actions of many of the secondary characters—the nurse Juba, the activists Nombuso, “Numbers”, Xolile, Sally/Mamma and others—both establish the depth and passion of the opposition to the regime and in many cases underpin the “bridges” between our two viewpoint figures.

It’s possible to learn a lot from Azanian Bridges, for it presents a location and a conflict which is relatively new to SF. But the learning process comes from reading and enjoying the story, and there is much to enjoy in this perceptive tale. It repays a second reading, through which much of the often moving insights into Sibusiso and Martin can be savoured. Altogether, a fine, intelligent novel.
Posted by Djibril at 16:04

This sounds great. I just added it to my "to read" list.