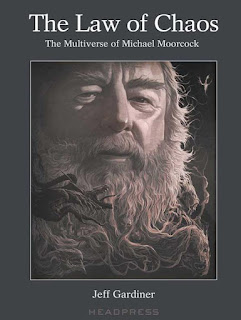 Better known in the twentieth century than today, Michael Moorcock, now in his mid-70s, began his career as a teenager with stories in pulp magazines, and has had an extraordinarily long and diverse career. “Moorcock is a protean writer,” Jeff Gardiner notes in The Law of Chaos, “whose work transcends literary and generic boundaries … [H]is novels are, paradoxically, both popular and literary. His writing covers fields as far ranging as romance, heroic fantasy, science fiction, fabulation, surrealism, popular fiction, satire, allegory, fantastic realism, postmodernism, magic realism, non-fiction, rock’n’roll, comics and even cinema” (8). Most science fiction and fantasy readers probably know Michael Moorcock for his genre writing: sword and sorcery (saga of Elric of Melniboné and his sword Stormbringer), Edgar Rice Burroughs pastiches (Masters of the Pit), alternate histories (Warlord of the Air), and time travel (Dancers at the End of Time trilogy). As editor of New Worlds during the 1960s and 70s, he helped to transform space opera into innovative, intellectually engaging speculative fiction. A professional musician, Moorcock has for decades been a performer and lyricist for the rock bands Deep Fix and Hawkwind. In the 1980s, Moorcock began to write such self-consciously literary novels as Mother London and Byzantium. In 2012, Moorcock published London Peculiar, a collection of non-fiction essays, including accounts of his childhood during the London blitz, a period that profoundly influenced his writing. Recently, he has authored comic books; a computer game; and the first volume of a trilogy, The Whispering Swarm.

In The Law of Chaos, Jeff Gardiner maintains that Moorcock’s “Multiverse”—“a ‘quasi-infinite’ series of interlocking worlds, each a fraction different from the next, where millions of our realities are played out” (2)—informs his entire canon. Surveying Moorcock’s stories and novels in roughly chronological order, Gardiner demonstrates how Moorcock’s archetypal character, the Eternal Champion, evolves from novel to novel. Shaped by the fictional worlds in which he appears, the Eternal Champion has differing histories and names, though his essence remains the same. Underlying Moorcock’s fiction, Gardener observes, is the conflict between order and chaos. “It is up to the Eternal Champion,” Gardener states, “to make sure the balance is kept in equilibrium lest the world should suffer the legalistic, stifling tyranny of law, or the anarchic insanity of chaos” (38). Moorcock’s heroes, Gardiner notes, fight on the side of chaos, while villains enforce soul-deadening uniformity.

Though Law of Chaos provides a valuable framework for understanding Moorcock’s fiction, I found the book a tough slog. Gardiner’s style is plodding and his thesis far too rigid and schematic. In a succession of synopses, Gardiner reduces Moorcock’s quirky, witty, kinky fiction to three preoccupations: the multiverse, one recurring Moorcock character, and the conflict between order and chaos. Neither individual chapters nor the book as a whole demonstrate any argumentative progression. Gardiner’s plot summaries reduce complex novels to platitudes: “Life is a sensory experience where desire must be fulfilled and feelings expressed,” Gardiner writes of Gloriana, “but only in a society where there is some acknowledgement of responsibility and medium of control” (88). Though Gardiner quotes Moorcock’s writing extensively, Law of Chaos lacks footnotes. Abounding in the passive voice, Gardiner’s critical analyses are confusing and ham-handed. Though Gardiner must be passionate about Moorcock to have read all his work, his plot summaries are superficial. Reviewing Law of Chaos, I was not inspired to seek out Moorcock works I have not read.

Nonetheless, by identifying the Multiverse as Moorcock’s unifying principle, Gardiner provides Moorcock readers with a valuable insight. Because Moorcock’s novels have appeared over many years, readers may not consider the relationship of one book to another. Law of Chaos explains that Ulrich von Bek, protagonist of The War Hound and the World’s Pain (1981), is the first manifestation of the Eternal Champion, a ubiquitous figure who undergoes metamorphosis in Moorcock’s successive fictional worlds. Gardiner discusses chronologically stories and novels that feature versions of von Bek, a self-serving, pragmatic, ruthless soldier who considers atrocities necessary tools of war. In explaining the evolution of the Eternal Champion, Law of Chaos provides readers with a useful framework for understanding Moorcock’s diverse work.

While Gardiner notes that the Multiverse is Moorcock’s unifying mythos, he stops short of exploring its metaphorical significance. I was struck, however, with how similar a unifying symbol Moorcock’s Multiverse is to Stephen King’s Dark Tower. Like the Dark Tower, the Multiverse brings versions of the same character to different places and historical periods. Moorcock’s latest novel is an autobiographical fantasy too recent to be discussed in Law of Chaos. In The Whispering Swarm: Book One of The Sanctuary of the White Friars (2015), Moorcock makes the symbolism of the Multiverse clear. Protagonist “Michael Moorcock” periodically visits an alternate London, where he has swashbuckling adventures with Andrew Marvell, Dick Turpin, Dumas’ musketeers, and other fictional and historical figures—adventures that Moorcock uses as raw materials for stories. For Moorcock, therefore, the Multiverse symbolizes not only the reader’s experience of being transported to various worlds, but also the work of the writer. With the God-like power of bringing into vibrant life beings from any place or time, fiction writers, Moorcock suggests, both inhabit and manipulate the Multiverse.

In conclusion, by noting that the mythos of the Multiverse underlies Michael Moorcock’s entire literary canon, The Law of Chaos performs a useful service. Because Moorcock’s fiction is extraordinarily heterogeneous, most readers (myself included) are likely to be familiar only with a few favorite genres. Unfortunately, though it finds important commonalities in a diverse, extensive body of work, this book neither energizes nor engrosses the reader. Nonetheless, I would, with qualifications, recommend The Law of Chaos, if only because Jeff Gardiner is something very rare: a Michael Moorcock completist.
Posted by Djibril at 17:00