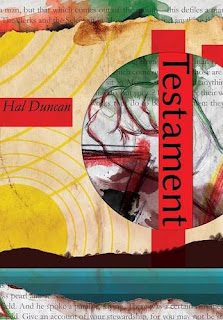 Speculative stories that rewrite the Bible (or its offshoots) are common enough to be nearly a dime a dozen; the sort of short story that begins with marooned astronauts on a hostile planet named Adam and Eve is a risible cliché for a reason. In Testament, Hal Duncan rewrites and intersperses the Gospels with commentary from an unnamed author, and if the product is not necessarily new, it is nonetheless absorbing.

Duncan creates two narratives in this work: the first being a somewhat straightforward recasting of Biblical text, typeset in familiar double columns and making small replacements, such as using “Worker” for “Creator” and “sublime” for “grace.” These are small changes that connote a world of meaning, especially shifts in meaning. Those readers who generally do not pay attention to translations—and Biblical translations, which of course are even more fraught in meaning—will be drawn to them here because of Duncan’s adept ventriloquizing of King James Bible style English. The second narrative is a contemporary one, typeset in a smaller, more traditionally “novel” format in brief bursts, and told in epistolary form to a violent, homophobic “lover of the sublime.” Truthfully, I was expecting these two threads to combine at some point in something like a traditional conversion narrative, but that didn’t quite happen—instead, the addressee becomes, in the end, the “everyman,” the reader. This transition shifts meaning too, as Duncan’s unnamed narrator exhorts first this assumed other to acknowledge everyday atrocities large and small for the crimes they are, whether they are groups of students being gassed by the police state or Syrian refugees fleeing en masse. The reader who has, until this moment, been aware of these events but felt themselves separate from the addressee, is then pushed into something like complicity as they are prodded to take action.

Above all, this story draws attention to reading Jesus as a crusader for social justice and something like a social anarchist. While these aspects aren’t exactly new to readers informed on historical theology, they will assuredly make a great impression on casual readers. Frankly, this is exactly the sort of book that would have most blown my mind in high school, in a profoundly thoughtful way, and as such I really hope it finds its way into the hands of younger readers who are, much as I was, stuck between a profoundly narrow-minded Christian milieu and a bigger, realer world not yet in reach. Despite preoccupations with violence and queer sex, the actual text itself is not all that explicit, with visceral images drawn in words from the pictures shown everyday on our television and computer screens.

My one complaint about the book is that the roles open to women remain small and largely passive—a choice especially at odds with past trends to retell Biblical tales through women in the mode of Anita Diamant’s The Red Tent and its imitators, or even to recast the new Savior as a woman, as James Morrow did in Only Begotten Daughter. If many feminist readings of texts get critiqued for being insufficiently intersectional, then this should also apply to this queer reading of the Gospels. While the relationship between Joshua, as Duncan dubs Jesus here, and Judas appears only late in the book, the homosocial bonds between he and all his followers are viewed closely at all times, while the Marys and Martha remain only on the periphery. (And in case you’re wondering, Joshua definitely doesn’t get married here, to the Magdalene or anyone else. While the legalization of gay marriage in multiple countries is still ongoing, I think it would have been a really interesting twist to have seen this profoundly socially aware, anarchist, queer Christ marry a dude, but that may just be me.)

Ultimately, Testament is a fascinating exercise in reconsidering revealed truth. Duncan’s book ends with the Fall of an Empire, a Pilate in riot gear, and the Everyman on the precipice of a new world in the making. Given how profoundly we, too, are on the brink, with rising fascism and global catastrophe edging ever forward, it’s well worth considering what roles we ourselves want to play in this new world, whether as readers or revolutionaries.
Posted by Djibril at 16:55