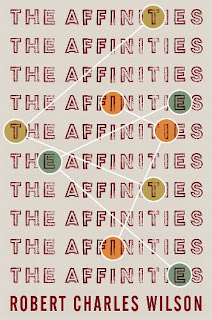 When I first started reading this very readable novel, I thought, this isn’t science fiction; it’s a very well-written mainstream novel set in contemporary Canada and U.S. Then as I was sucked into the narrator and his family, then substitute family, I saw many of the frustrations that I, and I assume many of us have had with families and neighbors who just don’t get us. It was only then, when the protagonist takes a series of diagnostic “exams” for a corporation called InterAlia Inc., that I began to recognize my own experiences with eHarmony and similar matchmaking organizations, and was prepared to go the extra step with this setup to see where it was going to lead.

Basically, without being too hyperbolic about it, it was like Asimov’s Foundation, where the mathematical genius Hari Seldon comes up with a mathematical basis for predicting the overall future actions of humanity on a galactic scale—but here, Meir Klein has developed the Affinities, which are a group of different personality modalities, each of which consists of a group of people who, even though they are individual and have individual strengths, weaknesses, and preferences, just somehow are able to “work together” naturally. Klein has identified over twenty “types” of people, each designated by a letter in the Phoenician alphabet, that he can isolate through administering a series of diagnostic tests, and he, through the InterAlia corporation, have grouped members of these Affinities together in smaller units, known as tranches (French for “slices”), of about 30 each, the ideal working unit of humans since the neolithic hunting and gathering societies.

The science fictional aspect of this novel emerges as it becomes evident that the very gathering of people together in Affinities is affecting society as a whole, and not in completely predictable ways. People in certain of the groups seem to start working against people in other groups, although they seem to be fairly clever at disguising such competitions as other types of activities. Also, there is a Brave New World aspect to the rise of Affinities when it becomes evident not only that different of these groups have different strengths, but that people of one affinity are not allowed to live with people of another. It just gets too frustrating to work at cross-purposes with people who fit into the world differently. Also, there are the people who either do not fit into one of the Affinities or who deliberately refuse to take the diagnostic tests: NOTA, or “none of the above.”

What initially seems a miracle for Alex Fisk, who has lived all his life with a “racist asshole” of a father and an older brother who does everything right according to their father’s lights, because suddenly the artistic and nonjudgmental Alex has a household and more kindred spirits he can work (and play) with, seems increasingly like a social grouping that chafes against those who either don’t fit in one of the groups, or… who evolve. Fortunately, Meir Klein has not recorded holographic images of himself to appear at crucial moments in the historical development of the future, as in the Asimov novel, because this novel is about a group of people developing, applying, and elaborating a social theory that has both potentially liberating consequences and the ever-present necessity of evolution.

Readers of the traditional novel will point to a relative lack of depth of characterization, and of character development. The plot moves delightfully fast from the point of view of the reader who likes to fast-forward and see events unfold through time-lapse photography, but often the characters seem flat and too conveniently constituted to stand and live on their own; they exist to move the plot forward. As it has been pointed out, this is also true of Asimov’s Foundation, where we will meet a character and see him interact for two chapters or so, then move on to another generation, and so on. This is because the main character of Foundation is psychohistory itself, and individual humans are points on the graph that shows the overall movements of society as sketched out by the algorithm.

Similarly, the main character in The Affinities is teleodynamics, the scientific basis for the algorithms used to class people in various Affinities, and we see over the course of the novel that the individual’s importance is reduced in groups who adhere to this science and its implications. Someone who evolves “into” a different Affinity is no longer a member of that group, and must find her own group to live with; bonds such as friendship, marriage, parentage and the like are no longer the basis for the social unit of these people—although there are still plenty of people for whom this is still the case.

In the wake of the communes, ashrams, intentional communities, and similar alternative group living arrangements of the past half century, this novel asks us what we need to acknowledge in choosing our living partners, cohorts, and communities. Colleges have dabbled in the “science” of choosing compatible roomates for decades, online dating services have pretensions of owning the algorithm that will take two people out of a pool of thousands and pair them up in the best situations possible. The judgment about whether any of these devices ultimately works well, superlatively, or at all, is not yet in, in our “real” world, but what InterAlia Inc. and related groups find in this novel, though it never tells us in great detail how these groups sharing an Affinity work together rather than just saying that they do, begins to give us a sense of some of the limitations to the notion that everyone can been included in one of the groups, and this lays the groundwork for some great Social Contract in the not-too-distant future… perhaps.

One more thing: although this is not a sex-filled novel, it does have an intimate scene that is eloquently described as only a science fiction novel can: “I liked the way she moved, unselfconsciously naked, fluid, her body more wave than particle” (116). Any novel that can so seamlessly fuse hard SF and poetic lyricism deserves to be tasted for the sheer sensuousness of it.
Posted by Djibril at 16:08

This sounds very interesting. Thanks for the review.