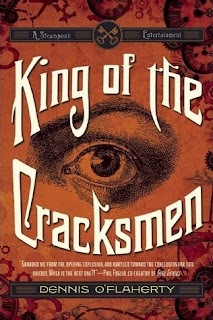 Subtitled “A Steampunk Entertainment,” Dennis O’Flaherty’s first novel is set in an alternate, post-Civil War America. Lincoln’s Secretary of Defense, Edwin M. Stanton, has become de facto president after John Wilkes Booth’s unsuccessful attempt to assassinate Lincoln. (Though he survived the assassination attempt, Lincoln has mysteriously disappeared from public life.) Through surveillance and intimidation, Stanton is rapidly creating a fascist dictatorship. Spanning only a few weeks (June 19th to July 2nd, 1877—the novel is precise about dates), the story follows Irish safecracker, Liam McCool, who serves as an undercover agent for the Pilkington detective agency (“Pinkerton,” in “our reality”). A gifted but unwilling detective, McCool has been blackmailed into becoming one of “Stanton’s Eyes.” Because Pilkington detectives are trained to perform carefully scripted roles tailored to their undercover missions, Stanton employs them as spies and strikebreakers.

With beautiful Becky Fox, a crusading investigative journalist, McCool races from one adventure to another. At the beginning of the novel, Liam and Becky are in Henderson’s Patch, Pennsylvania, where Liam poses as a Molly Magee, a fictional version of the Molly Maguires, Irish coal miners fighting for workers’ rights. Becky has come to Henderson’s Patch to do research for an article on exploited mineworkers. After ten imprisoned Molly saboteurs are hanged, Liam and Becky return to New York, where Liam plans to resume his life as a bank robber with the Butcher Boys gang. Mr. Pilkington, however, blackmails Liam, who is fluent in Russian, into a second undercover mission: spying on Russian settlements west of the Mississippi. Liam and Becky travel by airship to New Petersburg (Minneapolis, in our reality). In rapidly paced and increasingly fantastic escapades, Liam and Becky meet alternate versions of Lincoln, Mark Twain, Frederic Douglas, General Custer, Crazy Horse, and other late 19th century celebrities. All the principal characters—unbeknownst to one another—are spies or double agents.

Cracksmen’s post-Civil War America is informed by O’Flaherty’s extraordinarily detailed knowledge of nineteenth century history and culture. Cracksmen’s U.S. began diverging in 1835, 42 years before the novel begins, when President Andrew Jackson made a “disastrous sale to Russia of everything west of the Mississippi” (201). (In reality, of course, the U.S. purchased Alaska from Russia in 1867, ending Russian sovereignty on the North American continent.) Cracksmen’s Little Russia is also inhabited by Indians, “both the ones that Andrew Jackson had forced out of the eastern states and exiled across the Mississippi in the Indian Removal Act of 1830 and the ones that had already been living there before the Russians set up housekeeping…” (192-3). By enslaving the Indians, the Russians, though technologically backward, pose an economic threat to the Americans, who have outlawed slavery.

Having restored public hangings and hired Spanish Inquisitors to teach torture techniques to his security forces, Stanton plans to attack Little Russia as a pretext for instituting “a National State of Emergency.” Rather drolly, Stanton has repurposed Tiffany’s iconic 1870 Union Square building: “Tiffany’s was now . . . the New York headquarters of the Department of Public Safety, on the roof of which a giant billboard had been erected displaying the motto ‘Per Aspera ad Securitas’ in golden letters twenty feet tall. Towering above the motto, and picked out day and night with colossal carbon-arc searchlights, was a stark, black-and-white representation of the All-Seeing Eye—a staring eye surrounded by rays of light and enclosed by a triangle” (135).

Stanton plans to invade Little Russia for an additional reason: control of pitchblende mines, found only in Russian Arizona. Pitchblende yields “calorium” (“uranium” in our reality): “just a pinch . . . will run a steam engine forever and amen” (242). While only the British have the secret of refining calorium from pitchblende, competition for this vital energy resource has put the U.S. and Little Russia on a collision course.

Cracksmen has multiple subtexts—all implied comments on 21st century society—some more fully developed than others. The competition between the U.S. and Little Russia for calorium, of course, alludes to the present-day race to develop and monopolize atomic and other energy resources. Climate change is hinted at in Cracksmen: snow falls in June; and there are gigantic, ferocious insects and mammals. Custer (in this world, an intimate friend of Crazy Horse!) deplores the Anglo-Americans’ self-serving exploitation of Nature: “One fine day the white man just strolls in here where the People are living in harmony with Nature and the Great Spirit and he tears everything up by the roots and destroys anything they can’t use” (240). The destructive impact technology is having on the environment is one of several crucially pressing problems facing 21st century Americans that Cracksmen extrapolates backwards to his post-Civil War U.S.

One of O’Flaherty's great strengths is his in-depth familiarity with late nineteenth century history, literature, and material culture. On nearly every page are references to notable persons, some little known today: “Mr. Brady’s photographs” (Matthew Brady photographed Civil War battlefields); Moody and Sankey (evangelists during the 1870’s). Characters refer to gadgets by brand name: the Webley British Bulldog handgun, the Royal Coachman fishing fly. McCool is an avid reader of Russian and American literary works and periodicals: Poe’s “The Pit and the Pendulum,” Tolstoy’s War and Peace, Godey’s Lady’s Book, Harper’s. Nineteenth century institutions and events are woven into the plot: the Whyos, a late nineteenth century New York City gang; the Coal and Iron Police; the Panic of ’73; the construction of the Brooklyn Bridge; the Draft Riots (1863). Readers may find historical context for virtually all of Cracksmen’s proper nouns through googling.

While O’Flaherty’s 1877 steampunk U.S. is more technologically advanced than the post-Civil War period of our own world, its inventions are not made up out of whole cloth—though some postdate 1877. Most notably, O’Flaherty has projected Nikola Tesla, the Hungarian electrical engineer responsible for both wireless communication and the generation of alternating current electricity, backwards a decade or more. (Tesla emigrated to the U.S. in 1881 and began transforming the country with his inventions in the 1880’s and 1890’s.) O’Flaherty’s Secretary Tesla holds a cabinet post and is responsible for “Voicewire” telephones and surveillance equipment, as well as electric lights, steam-powered airplanes, and steam-driven automatons.

Automata are prevalent in Cracksmen. There are two kinds: 1) calorium-fuelled Acmes that function as security guards and 2) automata with real human brains surgically implanted in mechanical bodies. The novel’s androids are not as anachronistic as they might appear, for nineteenth-century gadgeteers created numerous human-behaving machines: Edgar Allan Poe, for example, wrote “Maelzel’s Chess Player” (1836) in order to prove that there must be a man hidden inside a celebrated chess-playing automaton. Nineteenth century fantasy abounds in sentient machines.

Despite its wit and intelligence, Cracksmen has a serious flaw: the writing style abounds in walloping clichés: “Liam gave Boylan a stare as flat and cold as a lake of ice…” (180); “She… gave him a look so level and unwavering that he felt himself slipping again into the bottomless blue of her eyes” (209). Unfortunately, the writing in the first chapter, in which Mollies dynamite the boss’s house, is especially cringe-inducing. The stereotypical dialect of the Irishmen is borrowed from the Irish stock characters in 19th century melodrama: “‘Jasus, Mary and Joseph! … If I stub me toe on one more rock I’ll blow the bastard thing to smithereens!’” (1). When I first read the opening pages of Cracksmen, I threw the book aside in disgust. Had I not, subsequently, chosen to ignore Cracksmen’s heavy-handed style, I would have missed out on an exceedingly original book!

In an interview with SFFWorld, O’Flaherty announced a sequel to Cracksmen: The Calorium Wars. The title of the sequel-in-progress suggests that it will focus on the race between the U.S. and Little Russia for energy superiority.

Intelligent, capacious, exuberant, and off-the-wall zany, King of the Cracksmen is highly recommended for readers of alternate histories like Philip K. Dick’s The Man in the High Castle and Michael M. Moorcock’s Warlord of the Air. I eagerly await the appearance of The Calorium Wars.
Posted by Djibril at 16:07