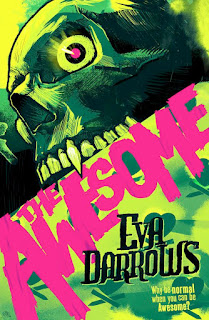 The Awesome is the sort of profoundly, well, awesome book that makes me resent the fact that the great YA renaissance is taking place while I’m in my thirties. When I was an actual teenager, lo many moons ago, the sort of YA heroines I got were girls who either a) babysat (blah), b) solved mysteries (meh), c) or were dying tragically of cancer (UGH). Eventually I discovered the classic SFF juveniles by Robert Heinlein, Anne McCaffrey, and others, but I’ve been rereading some of them recently, and they are often unforgivably rapey as well as retro. Eva Darrows’ The Awesome, on the other hand, features a heroine I would have given anything to read (and more to just be) when I was fifteen: Maggie Cunningham is a hunter of supernatural creatures under her mother’s tutelage, dispatching monsters by day and night while not-really working on her GED. She’s snarky and badass, and utterly without the sort of girlish polish that Buffy the Vampire Slayer was always gifted with. She wears jeans and combat boots and sweatshirts, finds normal people and boys bewildering, and is consumed with a singular goal: to lose her virginity so that she can finally become a journeyman hunter.

Maggie’s world is one next door to our own—supernatural creatures are somewhat public, and their regulation is a matter of public safety. Supernaturals are documented, and there are a variety of government personnel to sort things out, with hunters being a bit like our own bounty hunters, bringing in or occasionally dispatching those creatures that are a public menace. Vampires are particularly tricky—especially because they can sense virgin blood, and it throw them into a feeding frenzy. As such, the physical loss of one’s virginity is a dual rite of passage, as one is then cleared to start hunting the truly dangerous prey. Maggie’s desire for her promotion leads her to Ian, a cousin of her friend Julie, and what becomes a mission to get laid becomes the sort of awkward adolescent love story that’s all the more sweet because they never once use the l-word.

To digress for a moment, a lot of popular YA series—Twilight, The Hunger Games, the Matched series, just for a few examples—have a love plot where the heroine has to choose between two boys, and often has no female friends at all. The Awesome turns these tropes on their heads: Maggie is unconcerned with boys—indeed, with “normal” kids in general—but has been friends with Julie since childhood. Further, Maggie’s closest relationship is with her mother Janice, who is one part John Winchester from Supernatural and one part Lorelai Gilmore from Gilmore Girls; she mentors Maggie in the family business, is no-nonsense about sex and is generally a good humored, supportive mom. Sex, and Maggie’s desire for it, is treated without shame, guilt, or purple prose. The book is also clear that Ian is not Maggie’s “one true love” or anything like that, but what he is is a supportive boy who accepts Maggie for who she is and finds her attractive for who she is—a nonconventional but honest young woman. It’s also made clear that her very rejection of stereotypical femininity—her fighting skills as well as her status as a hunter—are traits he finds attractive. He has no desire to “protect” her or possess her, as so many YA male leads do, and she in turn enjoys his company. In short, they are complete equals who respect each other. It is sad that this makes The Awesome an exception rather than the rule, but we can hope that maybe, possibly, it will spark similar books and heroines.

In an unexpected twist, it turns out that Maggie is not the only one with a love interest: it turns out that Janice has had a relationship with a vampire named Jeff for quite a while. Maggie is resentful that Janice has kept this information from her—not least because she has been drilled her entire life to be suspicious of vampires and other supernaturals. Another complication arises when they discover Lauren, a young woman who has been unexpectedly resurrected as a fairly benign zombie. Lauren is content to make do with small wild animals and raw hamburger meat and becomes a member of their unconventional household until an alternative can be found. In short, Maggie’s small blood family extends into a wider family of choice. This is far from an unusual theme in speculative fiction, but given the general trend to read vampires as a metaphor for whatever society is anxious about in the given moment (most often immigrants, which is relevant here too because of the government agency that tracks their movements), the casual emphasis on inclusion is appreciated.

The Awesome is not deep reading, but it is terrifically entertaining. While in many ways it doesn’t break new ground, its valorization of women’s friendships and its honesty about teenage sex make it noteworthy. (In fact, the only other author I’ve seen to adamantly champion these facets is Meg Cabot, most famously the author of The Princess Diaries and other YA series. Unfortunately Cabot can sometimes be a difficult sell to teenagers—or adults—for that reason, but her writing is sharp and funny, so if you appreciate Darrows you will likely appreciate her as well.) It’s just, well, awesome.
Posted by Djibril at 16:30