Wearing, Girl at the End of the World 2 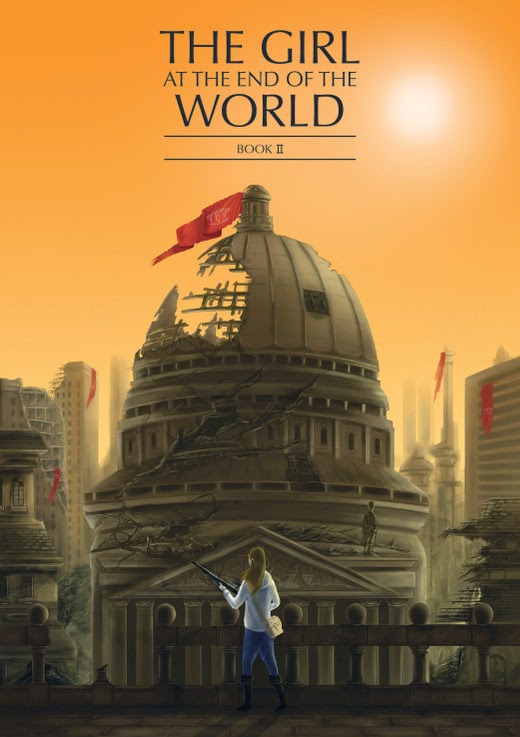 I have happily read many a trilogy or other sequence of books out of order, and this second volume of end-of-the-world stories by various authors is no different: not having read volume 1, I was at no disadvantage reading the second book. Indeed, except for a recurring set of motifs of various sorts of destruction and lawlessness, these stories could all stand alone. However, they do gain a certain quality of “strength in numbers” that gives the reader a sense of doing research in a certain genre. The stories in this anthology are by various writers, some of them professionals in the writing/editing/publishing field, some of them professionals in some other field, writing as fans of the genre, which straddles science fiction and fantasy. The postapocalyptic survival genre has long been associated with science fiction because generally the “end of the world” is the result of a superweapon or environmental catastrophe, but there is at least one story in this collection, “Dawn of Demons” by Eric Scott, which depends on a fantasy-supernatural infestation of demons, and where certain of the survivors know how to exorcise them from possessed humans.

Since the emphasis is on the Girl at the end of the world, there is always a strong female protagonist, often having to make up for male dysfunctionality either leading up to the world’s ending or characterizing males’ behavior in the post-societal times. Following certain trends in contemporary fantasy and science fiction, there is some male-bashing, as in Bruce Lee Bond’s “Girls’ Day Out,” in which a twenty-one year old woman must defend herself from males with a disease that manifests itself through tumorous growths. The story begins with her having chained a young man without the growths and pistol-whipping him and threatening to cut off his penis in exchange for information about the men he’s traveling with. There is a certain amount of the pornography of violence here, but the reader is assured that the protagonist needs to do this to maintain her own safety.

The first story, “The Weed Wife” by C. Allegra Hawksmoor, has a much more elevated tone, with long sentences filled by extensive details describing vegetation and drought, punctured occasionally by an abrupt incomplete sentence: “Like living icicles” (11). “The plague” (13). This rhythm, consisting of a profusion of descriptive detail with an occasional abrupt terseness, can be a bit irritating until one realizes that the alternation mirrors what is happening in the projected world: a cataclysm brought about by the awakening of a balrog-like entity called The Weaver King has left the land waste, and the titular Weed Wife is trekking purposefully across this devastated landscape to restart the processes of growth and life, and to encourage the occasional surviving person to return to living a meaningful, productive life.

The male-bashing is given a surprising turn in Adrian Tchaikovsky’s “The Girls from Humaji,” in which Magda, one of the women captured by a tribe of wandering barbarians with a male leadership, is unflinchingly described thus: “[s]he hurt from where they had beaten and kicked her, her skin a mottled patchwork of bruises, fresh red and older black overlaying the yellow marks of the first. She hurt from where they had burned her: arms, thighs, and the soles of her feet” (45). Not to give any spoilers, Magda will turn out to have a secret weapon that she will bring to bear, one with both symbolic and functional power. In a somewhat parallel situation, Anne Michaud’s “I Was Here” has the female narrator captured by a group of dominant males, but instead of building up a sense of solidarity with her fellow female captives, she is regarded by them with suspicion, and when they finally are able to turn the tables on the men and kill them, she is caged. She observes the rule of the Amazons with clear objectivity, revealing that they are no different than their former oppressors. She escapes to walk alone.

In Dylan Fox’s “Hope Street,” a postapocalyptic London is inhabited by rough gangs, including the protagonist, a teenaged woman named Duke. When we first meet her, she pulls the dead body of her friend Ivy from the ubiquitous water, and we know that she will spend the rest of the story reconciling herself to her friend’s death, and getting retribution for it, insofar as she can. However, early on in the story, it is said of her, “No matter how many windows she smashed, how many times she stabbed, how high she reached , they would never notice her. But what else could she do with this rage? How else could she stop the world treating her like scum?” (250). This illuminates the punk aspect of Duke’s personality; later, as she is confronting one of the kingpins of the postapocalyptic London, she reflects that “nature always wins. That humans are part of nature and the only sensible thing to do was work with it, not against it”—without reflecting this consciously: “She didn’t even think any of those thoughts, although they were all there in her mind, unarticulated like the water the fish of her thoughts swam in” (270).

In addition, there are some good science fiction stories in the collection. “The Sharks of Market Street” by Michael Ezell has created a post-global warming San Francisco where the level of the ocean has risen halfway or more up the skyscrapers, creating a new job niche for those who can swim into the underwater within the corporate office buildings to make off with special treasures to sell. The problem is the giant sharks and killer whales that have also moved in to feast on any slow or unwary humans trying this. Ezell creates a believable scenario with its own strictly observed physical and biological parameters, within the context of which there are some hair-raising brushes with the predators of the deep.

“Under the Green Witch” by Colin Sinclair turns a theater class into a question for us all, people alive before the cataclysm: “What’s my motivation?…Because they didn’t live it, they needed to ask: what is my motivation? Why am I doing this and not that? What are my needs and wants?” (143). Tying in with a mid-twentieth century science-fiction motif, the titular Green Witch presides over all of the actions in the story, and inserts a subtle twist in the questions the motivational speaker raises.

Kara Lee’s “Were Stars to Burn” is possibly the most conventional science fiction story of the lot, with the fast pacing and jaunty narration of James Tiptree, Jr./Alice Sheldon’s 1986 “The Only Neat Thing to Do.” Kudos to Lee for this passage: “Kay cursed, then hauled out her survival pack and levered the hatch open. She kept her helmet on, knowing that cosmological dice usually rolled up inhospitable planets” (405). This detail jives well with Gary Westfahl’s 2012 The Spacesuit Film: A History, 1918-1969 because odds are that any planet a human crashlands on is likely to have an atmosphere more likely to kill a human than not. What ensues is a rather touching interaction between Kay and the two sole holographic replicant survivors of Kay’s planet’s destructions, with an unexpected but also quite touching end. Finally, the last story of the collection, Cheryl Morgan’s “The Dragon’s Maw,” is by far the most cosmic of the stories, and, without giving any spoilers, provides a truly upbeat ending for this entire procession of grindingly gritty postapocalyptic scenarios.

The variety of styles and approaches means that certain selections will appeal to some readers’ tastes and not others—I found certain stories a bit more tedious to work my way through than others, and I found myself getting gripped by the excitement of, for example, Rita’s encounter with a shark in Michael Ezell’s “The Sharks of Market Street,” but for any readers who can’t get enough postapocalyptic ruin, survivalism, and similar adaptive human strategies for a world where the rules have all been changed, this is the ideal anthology.
Posted by Djibril at 17:12

I'm really curious about your use of the phrase "male-bashing" in this review. Post-apocalyptic fiction has a tendency towards violence and exploring the darker side of survival, so one has to expect that people - men and women - will suffer physical injury at the hands of another. An anthology which features women protagonists set in post-apocalyptic worlds will therefore be very likely to feature women assaulting men. Given the dystopian nature of the setting, sometimes that assault will be without moral or ethical validity, which serves to illustrate how far from civilisation the protagonist has ventured.

Yet when you use the phrase "male-bashing", you're hooking into a modern rhetoric often used to denigrate women who criticise men or the patriarchy. Clearly men are at times the victims of violence in some of these stories, and it would be very helpful to have some clarification as to wether you are referring literally to that violence, or whether you're taking an ideological position on your interpretation of the relationships between the authors and men.

I would be very grateful to hear your thoughts on this question.

My sense is that very often the males are portrayed as guilty--the patriarchy as responsible--for the environmental cataclysm(s) that have created the postapocalyptic dystopias that are the settings, and that many males have carried on with the same attitudes (as in the two stories with the male-dominated rovers). In the story about the sharks and the inundated San Francisco, the protagonist goes diving as her passion and in an attempt to make her own living before she is (inevitably) given away in marriage to make a successful property enhancement for her farmer father; (SPOILER ALERT) as her fiance, once she has her foot bitten off by a shark, says he will still marry her though her loss of foot will result in a lower dowry, her father heroically kicks the fiance out and cancels the marriage, with the implication that he is standing up for his daughter. The whole social setup is stacked in favor of the men, with the women as marriageable pawns, but this one spunky heroic woman has won herself a reprieve from the marriage she had dreaded. (This is in a story authored by a male, btw, so it has nothing to do with my interpretation of the relation between the author and men, unless this is millennial male guilt or something).

I have not formulated my thoughts on this very systematically, but it does seem that when woman are beaten in this collection, it is a crime, while when men are beaten, it is in retribution. However, I do not think this is a concerted effort on the part of the authors as a group, but is more of a reaction to the SF/F trope of a rape/murder of a woman providing the pretext/context for a revenge narrative (I have been reading some threads on the IAFA listserve dealing with this a year or less ago).

Have I addressed the issues you raised, or have I been too diffuse?