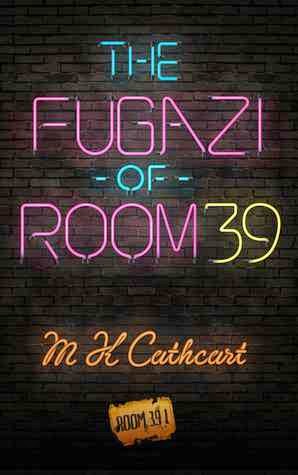 The Fugazi of Room 39 is the debut, self-published novel from author M.K. Cathcart, a dystopic science fiction thriller set in a future United States following a second Korean War. So what, exactly, is a fugazi, as referred to in the title of this work? Unfortunately, having striven to the end of this short work, I’m afraid to report that I am still none the wiser. There is an awful lot that remains unclear after turning the final page of this book, but these lingering mysteries owe more to the poor quality of the prose than misdirection or subtle plotting.

The book itself is rather well presented—the book’s cover is intriguingly emblazoned with a quotation from the Embassy of North Korea in London advising against the book’s release (Cathcart seems so proud of this warning that he’s copied it on the book’s back cover, too), and the author’s note is written in enigmatic code. So far so mysterious—my interest was piqued. However, the code turns out to be a disappointingly easy-to-break substitution cipher, revealing a missive from the author that lacks much interest. Furthermore, I now feel that North Korea’s embassy may have been on the money in warning against this book’s publication; it seems the embassy wasn’t railing against a damning portrayal of life under a North Korean-esque dictatorship, but rather providing a terse, yet accurate, literary review.

Any goodwill that the cover had earned was soon lost upon beginning the novel proper. We follow the exploits of Jesse Nolan, a hard-boiled LAPD detective with a troubled marriage, living in a USA that seems to be under the cultural cosh of Korea following a second Korean War. It’s a little difficult to understand why Nolan is so cynical, as he lives in a world in which there hasn’t been a murder in living memory. It’s also difficult to get a firm grasp of the novel’s setting, as the paragraph explaining this second Korean War is so poorly written as to be nigh-on incomprehensible. In any case, Nolan is called out to investigate reports of an unprecedented murder, leading to possibly the book’s highlight, involving Nolan, attending the first murder investigation in living memory, struggling to understand the correct procedure for such an investigation from antiquated archival documents. From here, a government conspiracy is alluded to, Nolan is framed for one or more murders and much chasing and violence ensues. While the plot had some promising scenes, these were all sadly undermined by uninteresting, hackneyed characters, wayward and confusing prose and sudden, inexplicable shifts in character perspective.

Much of the novel takes the form of a third-person narrative from Nolan’s perspective. Unfortunately, Nolan is a very unpleasant character who neither grows nor remains consistent. For instance, during our introduction to Nolan, he only remembers why he loves his wife when he is physically aroused by her. This is not to say that characters have to be likeable in order to be narratively enjoyable, but Nolan seems so unaware of the unpleasantness of his opinions that the reader can’t help but place barriers between themselves and him. Nolan veers wildly between a cynical, hyper-aware, no-nonsense tough guy and a meek, officious, servile toady, seemingly on a whim, or to serve whatever plot point is currently being expounded. Furthermore, for a man who has never been exposed to a murder, he is remarkably quick to resort to lethal force. Cathcart seems to have aimed at writing a protagonist in the style of Philip K. Dick, but Nolan lacks the self-aware acceptance of the mundanity of his life that the best Dick characters, such as Barney Mayerson from The Three Stigmata of Palmer Eldritch, have. Nolan seems smugly removed from the tribulations of the day-to-day, as if he is somehow so much better than the rest of the plebs in the world. Without any sense of weary acceptance, Nolan seems feckless and lazy, seeing all of the problems in the world, but blaming everyone else for these, never himself.

Significantly, there are no female characters of note in the novel, and those female characters that do exist consist exclusively of unpleasant stereotypes, such as a nagging, gossipy wife and an office secretary-cum-sexual predator. The work would fail the Bechdel test abysmally. At no point in the narrative would it have been possible for two female characters to have a conversation together, although we are given an observation in passing that Nolan’s wife and a barely introduced female companion are “prattling away” in the distance; this constitutes the full extent of the book’s portrayal of female relationships.

There is very little ‘science’ in this science fiction dystopia. The only technological advances in the novel seem to be the existence of flying cars (an age-old sci-fi trope) and loosely explained ‘bio-scanners’. These bio-scanners seem only a small step removed from contemporary technology, so I felt there was a lack of imagination in this area. Furthermore, the flying cars only seem to exist to serve the purposes of a weak plot-based joke, as the novel would have been just as functional without the inordinate amount of detail lavished on these contraptions. The plot is set at least 100 years in the future, and technology is clearly meant to have advanced during this time, as demonstrated by the invention of flying cars, but every other area of technology seems to have inexplicably stagnated. References are made to magnetic resonance imaging and transcranial magnetic stimulation, neurological tools that are already beginning to be replaced by newer technologies in contemporary science, yet they are alive and well a century hence, according to Cathcart.

The best dystopic novels hold up a mirror to our own society, extrapolating current trends and portraying their nightmarish end-points. Unfortunately, this book does not succeed in this area. It is difficult to see how the novel’s setting reflects contemporary issues in any way that has not already been thoroughly explored. Concerns about drugs and society’s dependence on pharmaceuticals are presented (already thoroughly explored by Philip K. Dick), and a shadowy government agency is invoked as an all-purpose bogey-man of State interference, but none of these ideas is given any room to breathe, so we are left with merely superficial examinations of issues that we have encountered numerous times before. However, I understand that this novel is meant to be the first part in a series of works set in the same universe, so perhaps Cathcart has plans for developing these dystopic elements in future.

However, by far the most significant problem with the novel is the quality of its writing. For a short novel, there is a surprising amount of waste. Too much description is given to physical movement, or even simply the apprehension of physical movement. Descriptors such as “… readying himself to stand up” or “… as she reached for a coffee from the machine next to where Nolan sat” are common, and only serve to bog down the prose in unnecessary detail. The novel desperately needs an editor. The text is littered with sentences that are difficult to understand, containing incorrect usages of words and astonishing numbers of spelling mistakes and inconsistencies. For example, the novel states that paper has been banned in Nolan’s world, largely due to a loosely hinted-at misinformation campaign about the negative health impacts of paper. This conspiracy is never explained, and I also lost count of the number of times characters referred to or used paper, seemingly without batting an eyelid at using this commodity that they are supposed to believe to be toxic. The feeling of struggling with the prose, rather than being carried along by it, was all too common, preventing any chance of successful immersion.

I am sorry to say that I did not enjoy this book. The writing was simply of too poor a quality to enable any sense of enjoyment or immersion to be obtained. Perhaps if the book had been more thoroughly edited and clearly written, Cathcart’s dystopian ideas—as dated and unconvincing as they are, as I have argued above—would have stood scrutiny on their own terms. As it stands, however, any such lenient reading is impossible, at least to this reviewer. Near the end of the book, one of the characters says to Nolan: “It’s all in the detail, when you write it up, remember that. Otherwise it won’t read right will it?” The author would do well to heed this advice.
Posted by Djibril at 16:00

"Fugazi" is the Vietnamese word for "chaos".

Thanks for clearing that up, that makes a good deal of sense.