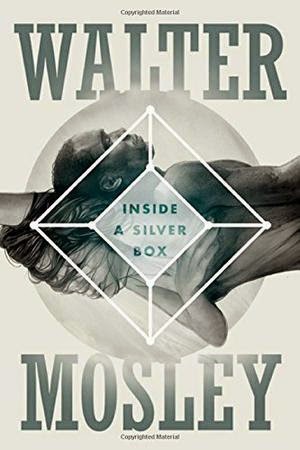 I’m a fan of ambitious tales. Nothing is more satisfying than a grand, sweeping narrative which explores vast worlds and strange, intricate cultures. It can be a risk, but a macrocosmic viewpoint can help us understand ourselves and our shared humanity. So when I learned of Walter Mosley’s new novel—a novel which spans billions of years, and as many species, I was more than a little enthusiastic. Proposing to probe the meaning of life alongside the nature of good and evil, Inside a Silver Box makes some difficult promises. Walter Mosley may be a prolifically successful author, but can his latest work meet this task, or is it too wide in scope for such a short text? More importantly: does it risk sacrificing plot and character development on the altar of philosophy?

The novel opens with a brief history of the universe: its domination by the ‘Laz’ (a race of scientists-turned-pyschopathic-torturers), and their weapon of mass destruction, the silver box (a sentient machine bestowed with god-like powers). Upon developing empathy, the silver box turns on its former masters, ultimately imprisoning them inside itself, and hiding in a remote, unimportant region of the galaxy—which of course is Earth. This far-reaching summary dispensed with, we’re introduced to the novel’s two central protagonists. Ronnie is a violent criminal who spends his days stalking the vulnerable, whereas Lorraine is an intelligent young student of comparative religion. Lorraine is rich, Ronnie is poor. Lorraine is calm, Ronnie is perpetually furious. Lorraine is white, Ronnie is black. We’re barely introduced to the characters before Ronnie violently attempts to rob and rape Lorraine, and murders her in the process—all within range of the silver box.

Leaving the troubling implications of a black man brutally murdering a young white woman aside for one moment (race is but one issue Mosley explicitly deals with), this leads to the novel’s intriguing premise: after stalking her murderer and having him use the box’s power to bring her back to life, both murderer and victim must work together in order to stop the recently-escaped Laz from destroying the world (if the box doesn’t get there first). As the novel itself surmises, “Through philosophy and street smarts, the two humans, pond scum in the perception of either the Laz or their rebellious device, hoped to achieve victory in a war nobody else knew was brewing” (p. 288). It’s a fascinating premise, combining an age-old ‘save the world’ plotline with all the tension and potential redemption which inevitably run between murderer and victim.

This strong opening is compounded by the novel’s own rich mythology. In its first chapters, Inside a Silver Box reads as a fairy tale, weaving science into magic, the characters playing with life and death like figures in an ancient Greek or Celtic saga. Souls swirl through the universe as though in the realm of Hades, and brought back as if from Ceridwen’s cauldron. The Pandora-esque box itself creates these vast and ever-changing worlds. The adventure begins with deadly magical forests, mystical caves, and even yellow brick roads—all the while with the two intimately bound by a combination of love, desire, and burning hatred. I have to admit I began reading obsessively, utterly drawn in by the premise and the strange realities of the box.

At its best the novel presents a panoramic view of humanity, in all its beauty and insignificance. The mythological curse shared between the two protagonists brings the narrative down to a more personal level. Robbie and Lorrie maintain a gripping dynamic, one of friends, lovers, enemies, siblings, and even parents to one another. Their relationship is unhealthy yet compelling, each infected with a part of the other. Their differences in race, class, and wealth force each to confront certain social realities, the most powerful being the implicit guilt of all those living in an unequal society. No-one can be fully innocent, and no-one fully guilty. As Ronnie states, “… you run down the street past poor, sick, uneductated, homeless, and hopeless people with yo’ fine ass and your pockets full’a money. I belonged in prison but that don’t make you innocent” (p. 82). The text demonstrates a strong awareness of issues surrounding both class and race.

The points can be a little too direct and even heavy-handed at times, but woven into the grand mythological epic of the tale, this is quite easily forgiven. If a man can breathe life back into his murder victim before the two voyage to save the world, we can tolerate some political postulating whilst they do so (though I fully admit that as furious firebrand myself, I may overlook this more easily than others). However, potential heavy-handedness isn’t the only problem the novel faces. At times Inside a Silver Box is profound—causing me as reader to stop reading in order to contemplate a political or metaphysical point brought up by the narrative—but at other times the attempts at profundity collapse into pretentiousness. Reading the text, it frequently feels as though Mosley would have rather preferred to write a philosophical treatise than a novel.

This focus on ideas and ideals damages both the novel’s plot and the development of its characters. The personalities and backgrounds of the individuals involved serve as generalisations, in order to provide for social as philosophical sentiments: as I stated earlier, the two protagonists are polar opposites. This diametrical opposition of two social archetypes is interesting in terms of society and the human condition, but seem stilted and unnatural when serving as characters in a novel. The same goes for other characters Mosley introduces—the bookish “egghead” Alton and the kind schoolteacher Freya, both of whom are as two-dimensional as a cartoon. In fact, it seems that the only purpose of the non-primary characters is to act as props for Ronnie and Lorraine, human puppets which allow the two to act out their new mixed personalities (Lorraine as carefree and sexually uninhibited; Ronnie as newly caring and sensually focused).

The flat characters wouldn’t be such an issue had the mythological tone continued—after all, no-one expects the figures of a fairy tale to be too complex. But the novel experiences a considerable (and inexplicable) shift in tone around mid-way through: whereas earlier the focus is on the grand and the mystical—the reader being coerced into the collision between the tale’s technological background and contemporary magic—the novel’s later stages are more mundane. Ronnie’s getting a job replaces his encounters with giant beasts, whereas Lorraine’s battles with magical insects are transposed into conflicts with her family. Their everyday pursuits wind up dwarfing the main storyline, and whilst this character-focused orientation is no bad thing in itself, it’s difficult to see its function in relation to the overall plot, especially as the characters themselves are so unrelatable. This is not helped by dialogue which is at times clunky and expositional: Alton compliments Lorraine by saying “You’re really deep.” (p.199), whereas Ronnie refers to himself as “… straight outta the hood.” (p. 212). Neither of these feel like realistic statements uttered by actual human beings, and they’re among many.

If I’ve sounded harsh these past couple paragraphs, it’s out of disappointment. Angry, frustrated, bewildered disappointment, a state Mosley wouldn’t have been able to drag me into had the earlier chapters not been so original and intriguing. Yes, there have been many modern fairy tales, but Mosley demonstrates an ability to combine this mythology with intriguing questions, providing the set-up for an extraordinary tale. Even whilst clouded by my apprehensions in the novel’s later stages, I never lost the urge to keep reading—though the story never returned to its initial promise.

Ultimately, Inside a Silver Box does manage to present interesting philosophical questions and perspectives, which when combined with its enchanted, fairy-tale elements proves both charming and captivating: had it kept the pace and tone of the early chapters it would have proven an exhilarating read. But the novel’s strong start flounders, the narrative focusing too heavily on the mundane minutiae of its characters, who, due to their two-dimensional nature, are too weak to carry the story by themselves. The tale never truly decides on realism or philosophical dramatism, and gets lost somewhere in the middle. It’s a novel I wanted to enjoy more than I actually did. Having said that, Mosley’s latest work is undeniably unique and original, and one which, in spite of its flaws, has stuck in my mind—leaving me trapped inside an imperfect silver box.
Posted by Djibril at 16:59