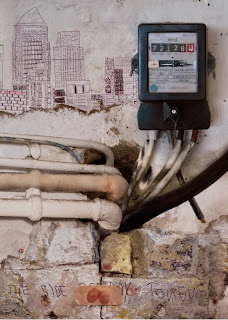 Automatic Safe Dog is the debut novel from musician Jet McDonald. In it, we are introduced to a strange man by the assumed name of Terribly Velour... ‘Telby’ or ‘T’ for short. Working as a dog comber for Pet Furnishings, Telby meets and is instantly taken with a woman by the name of Ravenski Goldbird. When circumstances separate them soon after meeting, Telby resolves to do anything and everything he can to insert himself back into Ravenski’s life and heart, even if that means committing various crimes and completely reinventing himself.

Telby is a classic unreliable narrator, and like him, nothing in Automatic Safe Dog is what it seems. You might assume Pet Furnishings would sell furnishings for beloved family pets, but you couldn’t be further from the truth. In fact, they sell pets that have been converted into furnishings, with a few ‘quick and easy’ surgical modifications. Advertising assures customers dogs love being sat on, as it gives them that little touch of ‘extra attention’ they wouldn’t otherwise get. As Telby says, “Dogs are just furniture with pets attached,” and this seems to be the general belief of most of the population, with the exception of the Animal Liberation Liberationist group.

In the style of classic British comedy, McDonald’s character’s are all somewhat ridiculous in their own ways. Each is an exaggerated parody of the type of personality they are meant to represent. At the same time, much like the drawings of the cityscape on the cover, all of the characters are decidedly flat, lacking in dimension and... well, character. Seeing the story play out in my mind is very much like playing with paper dolls when I was a kid—a bunch of thin cardboard cut-outs that bobble to and fro as words pop from their mouths in imaginary speech bubbles. However, this is not the result of poor writing ability, but an effective and purposefully used tool to highlight how shallow the people have become.

In McDonald’s London, none of the people have any real sense of who they are or what their place in the company (and the world, since the company is their world) really is. All of them have inflated egos and low self-esteem, trying to prove to everyone else—but mostly to themselves—that they have some sort of worth, which is always being undermined; a cruel, vicious circle, yet they all keep going round and round it voluntarily, apparently blind to its existence. People are driven to move for the sake of movement; forward movement at all costs, never taking a moment for reflection or introspection. They don’t work for the love of their work, they work as a means to an end, like a horse chasing a carrot. Everyone wanting to ‘make it’ (whatever ‘it’ may be) and never taking any real joy from the lives they’re living, always looking and reaching forward for more, better, newer, trendier. In this sense, McDonald has created a wonderful treatise on progress as opposed to conscious living. In modern society, far too many people share Ravenski’s philosophy; “We’ve got to keep on moving, moving, keep on moving, don’t stop, don’t ever look back...” “Sometimes it’s easier not to understand, because then you can’t see and who needs to see as long as you get where you want to go.”

Even people are treated not so much as human beings, but as property. Sex has become something to do rather than something to share, and the corporation has taken over control of private relationships. Ibore Davidson refers to Telby as her ‘prop’ and decides he needs to change his image based on her desires during a short-lived fling between them. Telby is at one point informed, “You’re company property now,” and not only forbidden to speak to Ravenski, but physically prevented from doing so, when the boss decides fraternization is not in his best interest.

The result of all of this, of course, isn’t pretty. One of Telby’s first sane thoughts is, “It’s as if at the centre of all these occupations and leisures and restaurants and hobbies is a soullessness and we make for ourselves a whirlpool; a whirlpool around us.” A bold statement about the incessant need to always do, do, do and never just be. Living like this, it’s only logical that eventually some sort of boredom-induced insanity will appear as people will do anything to cut loose and go crazy to release these pent up feelings of anxiety and rage. Substance abuse is the norm rather than the exception, and decadence reigns supreme. It gets to the point where we even understand Telby’s newfound masochism, because as Three Days Grace sings, “I’d rather feel pain than nothing at all.”

After all of this—the skillful writing, the carefully crafted characters, the ridiculous humor—I really want to like this book, but I just can’t bring myself to. I may be wrong, and McDonald may be a mad genius in his approach, but for someone like myself, an animal lover whose dog is like one of my children, someone who does what I do for the joy of it, my biggest response overall was a sort of sickness. It took me a lot longer than usual to read this book, because I dreaded picking it up. Descriptions of the ways the dogs were treated and designed bothered me more than I can say.

And this is the crux of the problem. I have to wonder if, using this approach, McDonald didn’t shoot himself in the foot, so to speak. I fear that the people who read and enjoy this book may be the very people it seeks to make fun of, and its points will be lost on them. I fear those who would read it and understand all the things he tried so hard to say (and I only touched on just a few) will be put off by the same things that made me want to stop reading after just one chapter. My hope, however, is that after reading this, those last people will know more than I did what to expect, and perhaps be better prepared, so that they can pick this book up and read it for the salient points I started out with. If someone had written this review before, or if the forward had said something like this, I might have known better what to expect, and I think that would have made it more of the experience it was intended to be.

Huge thanks for this very in-depth review, Jessica. My own reading of Jet's book, for what it's worth, was that it was an anti-vivisection statement, cloaked in flippancy to catch us off-guard. A society that devalues animal life will always ultimately devalue human life also, as we find out later. Send not for whom the bell tolls and all that...

Hi Douglas,
I did understand Mr. McDonald's inspiration was likely the popularity of designer dogs, and those people who are so willing to have their dogs' ears cropped and tails docked for 'aesthetic' reasons.
Of course, when we, as a society can be so inhumane to those who depend on us for their well-being, we can hardly be surprised when our employers and schools and even our love interests do the same to us. The author's views on this are, in my opinion, right on target. He made a great many excellent points, and the story is well worth the read; my concern was only that this approach might make it difficult for more sensitive readers to enjoy, so I wanted to focus on that a little bit, to hopefully tell those potential readers to be aware that Mr. McDonald's topics are well worth any amount of discomfort some of the scenes may cause, and to keep reading.
Thank you for offering me the opportunity to review Automatic Safe Dog.