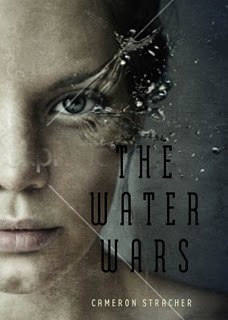 Cameron Stracher’s The Water Wars is a YA dystopian novel set in a world where water is a rare and precious commodity. The countries in the novel’s world are in conflict as they try to gain control of the little drinkable water that is left. 15 year-old Vera narrates the story that begins with her meeting the mysterious Kai, who tells her of a river that exists but is being kept secret by the authorities. When Kai goes missing, Vera and her brother Will go in search of him and learn the truth about the worldwide drought: that it is due to lack of access to water, not a lack of water itself. The premise of this novel was intriguing, and when the book arrived I loved the stunning design of the dust jacket, but I’m afraid this book did not match my expectations.

My main issue with it is that the first person narrator Vera did not ring true to me. She sounds far too old—just because a main character is a teenager, doesn’t automatically make the book a YA read. There are too many examples of this to count, but here’s a taster:


“There was something unholy about the relationship between the corporate desalinator and the environmental group.” (130)

This book would have worked far better in the third person, since Stracher’s attempt at a first person narration ultimately fails—he tells us what happens to Vera, but we never feel it. The distance between character and plot would be lessened if he’d taken the third person route. In addition to this is the fact that Vera has no character arc; she does not learn from her experiences in the novel and by the end hasn’t changed at all.

My other issue with the writing is that old writing workshop adage: ‘show don’t tell.’ Stracher ruins the pace of the novel by summarizing important episodes in the book that needed to be written out as they happen, so that the reader is right there in the moment. Again, there are many examples to choose from but here’s just one:


“But we made two mistakes. The first was that we assumed our pedicycles could withstand the gruelling ride over forty-two kilometres of broken road. The cycles were meant for short trips—the market, school, a friend’s apartment complex. They were not meant for dirt and gravel roads that had not been repaired in years and were littered with old car parts, scrap metal, rubber and glass. We made it about fourteen kilometres before I got my first flat.” (130)

This cycle ride took place at a crucial time in the story – there were high stakes for the characters to get to their destination on time. But because the episode is reported like this, the tension is lessened and the impact of the kids’ journey is wasted.

Stracher’s strengths are world-building—he does a nice job of creating a dystopic near-future. He writes some lovely descriptions:

“The sound of the clogged water was unlike anything on this Earth: a low keening, like some prehistoric animal bellowing in its death throes.” (202)

There are some fun cyberpunk elements with techie references such as ‘YouToo’, ‘wi-texts’ and ‘holocasts’—nice variations on communication methods we have now, that help immerse the reader in the world of the story. Unfortunately, there were also references that took me out of the story, such as when he refers to some girls in Vera’s class using nail polish; as a water-based product, I didn’t understand how it would be freely available.

The other part of the novel that Stracher does well is the section dealing with Vera’s romance with Kai. Her feelings for him seem realistic and relatable:

Vera’s obsession with Kai is sensitively portrayed. As a character, she doesn’t lose herself in her infatuation, unlike characters in more mainstream novels, most notably Bella Swan in Twilight. She never merges with him.

The crux of this novel is that the drought that is making life so hard is not down to lack of water but lack of access to water due to political greed. In a world where enough food is produced but so many people in the developing world go hungry, this is an interesting and noble premise. However, this theme gets muddled in the book. There are so many opponents—Bluewater, pirates, PELA, the government—that it’s hard to know who is the root cause of the problem. I feel the book would have been stronger if it had just focused on one or at most two conspirators. But to really pull off the potential of this book, Stracher would have had to narrow the distance between the characters and reader. This book tries to make many interesting points, which make the reader stop and think—but we don’t feel them.

The Water Wars is a considered book and at times a compelling read. Just don’t mistake it for a YA novel.