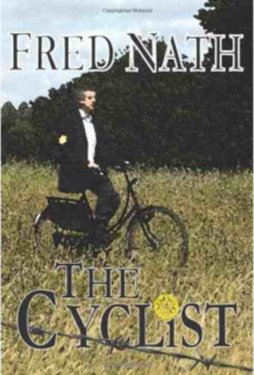 The Cyclist is the debut novel by Fred Nath, a neurosurgeon from the North East of England, and it is published by Fingerpress, an independent, London-based publisher, who claim on their website to publish non-fiction and “top-quality fiction across a range of genres.” The précis sounds promising enough: a thriller set in 1943 Aquitaine; Jews being rounded up; a sadistic German SD officer on the scene; the murder of a sweet young chanteuse; and a sterling French policeman, Auguste Ran, wanting to redeem himself for his complicity in incipient Nazi atrocities, and, as a consequence, having to escape to Switzerland with his family and oldest friend.

Unfortunately, this expectant interest is soon overturned, and any ideas of getting into this story—such as it turns out to be—are pretty much abandoned. The prose is at times awfully clunky and the narrative voice which it conveys uncomfortably earnest. For me, at least, the problems in style and voice are too great to have afforded any hope of becoming involved in the rather simple, though perhaps potentially rather good, story.

So, to the first stumbling block, on the first page, where Nath, perhaps in his eagerness to impart a realistic, atmospheric detail, goes so far as to describe a woman thus: “An elderly woman, curly grey hair and sagging breasts...”

Of course, I concede that sagging breasts certainly amount to a realistic detail, but surely not a very necessary one. Or perhaps I’m being too sensitive and shouldn’t attach much importance to it, that it’s natural enough in the flow of the narrative? Or then again (and this is what I was actually at first prepared to think) maybe the author is up to something: perhaps there would be some consequent detail about this woman’s breasts (in her youth perhaps) that would render their present sagginess all the more striking, poignant, or, for that matter, funny. But it’s clear, once you’ve got to the end of the opening page, that no such future revelations or explanations are likely to be forthcoming. Instead, the thing that I then became most aware of was the childishly earnest narrative voice.

Indeed, it is a narrative voice which, by virtue of its childishness and wish to blandly over-describe, often brings forth wasteful, explicatory sentences, tagged on to the end of paragraphs (whether or not the paragraphs are redundant already is open to question), as with:

“He shoved Claude’s body into the hollow trunk. It was an impossible task, because the feet stuck out and he had to gather fallen branches and armfuls of leaves to hide them. Anyone walking the path in daylight might have spotted the corpse otherwise.” (my italics)

And there are other moments where the writing is just inappropriate.

“Brunner swayed back and forth. A greenish colour began to evolve on his face and it gave Auguste a deep satisfaction and pleasure to imagine the wine jettisoning from the German’s gullet...” (This somehow had me thinking of vorsprung durch technik advertisements.)

Or a bit silly:

“The wicked English, the ‘Rosbifs’, were rumoured to haunt the ruins, though Auguste paid no attention to such childish beliefs.” (Presumably this was to reassure us of our hero’s sense of reason.)

“They embraced and he held her as tight as he would the edge of a cliff from which he had slipped. He felt like a plummeting man.”

He felt like a plummeting man? After reading that, so did I.

But there is more. The most irritating grammatical feature is in the use of commas. They sometimes crop up understandably to denote a subordinate clause, but don’t then reappear to mark its end, e.g.:

“The light, he was sure came from a torch and he saw it hover then extinguish. (sic)”

Or sometimes they just crop up in the wrong place:

“Zara, ma fleur, Zara,” Auguste said, reaching towards the stairs with one hand, grasping the empty air as if by doing so, he could mend the hole Odette and he had made in her life. (sic)” etc.

But in fact, the most hideous editorial feature is the prevalent and inappropriate hyphenating of words when interrupted by the line ending, as with: “pu-shed,” “ca-lled,” “fl-ailing,” “ke-ep”—and, of course: “Aug-uste.” So it does come as quite a shock that the book has been published in its present state, and I think the publishers (Fingerpress) and editors have to be held partly responsible for many of its flaws.

To some extent these editorial mistakes perhaps make it difficult to fairly and fully appraise the novel’s (would-be) literary merits, though on the other hand they do serve to complement its most obvious demerits. On the whole the characterisation is wooden. The protagonist—chief of police Auguste Ran—is unremittingly and (most importantly) unrealistically earnest. His friendship with Pierre, the Jew he’s known since childhood, is mainly defined by the way they rag each other about their respective faiths (Judaism and Catholicism) which isn’t particularly endearing (as it’s presumably supposed to be), it’s jarring and unconvincing. Indeed, the attendant theme of Ran’s struggles with his religious conscience is also handled with unrealistic simplicity. The characterisation of the German officer, Brunner, is, however, a little more engaging (and the scene involving the Nazi Barbie is interesting), but even here there is a sense that Brunner’s evil is never properly communicated: it is, I suppose, to be taken for granted. As it turns out, the lesser characters (the treacherous colleague, Claude, and the loyal secretary, Édith) are more convincing: it is perhaps a shame that more attention isn’t paid on them.

In fact, there is a sense that if this book had been properly edited and the author had had some sensible feedback with regard to characterisation and narrative voice, the story itself could have won through, and this could have been a passable novel. (In its present state, though, any emphasis on the purported theme of ‘a search for absolution’, as indicated in the ‘Note to the Reader’ before the start, again seems uncomfortably ambitious.) There are some scenes, particularly towards the end, which, in spite of editorial or authorial neglect, do just about sustain the reader’s engagement. And although this does not hold for the book as a whole, it may be fair to say that the author can envisage a good story: he could just do with a bit more care and guidance in putting it into print.

So what might have been, if ably handled, an interesting insight into a certain period and place in history, and even an exciting thriller, is rendered a lumpen, badly edited—or perhaps just not edited—account of people that, in their unrealistic portrayal, are impossible to identify with.

Oh yes, and then there were the sex scenes... but that would be too much...