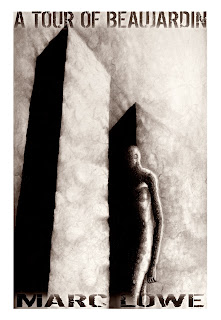 ISMs is a Manchester-based independent press, producing chapbooks and e-books, that specialises in edge fiction: odds and sods, curios and, in their own words “to promote the best of the darkest, quirkiest, most surreal new writers in town.” Also a publisher of an e-zine, Sein und Werden that sees itself as “a literary magazine of experimental prose, poetry and artwork that seeks to merge and modernise the ideas behind Expressionism, Surrealism and Existentialism,” there is a distinct stand for individuality and an unashamedly choosy editorial position. If it’s not clever, witty, dark as pitch and unrepentantly visceral, it probably won’t make it in. This could be seen as literary snobbery; instead, it is a filter for odd little offerings like A Tour of Beaujardin (or The Derelicts).

Lowe’s touch is light, inviting implication and reader involvement. He sketches the frame, sets the mood lighting: the reader fills it with the dark scenes and dystopian details gleaned from previous novels read, films watched, etc. Like the image on the cover; a figure half-hidden in the shadows of tall blocks, he is deliberately allowing interpretation of a half-seen view. A writer of dark and weird subjects, highly educated (to masters level), it would be naive to assume that his writing, while having all the freshness of spontaneity, is not heavily influenced by literary and creative themes. Certainly the reading of his work brings multiple readings to mind. Some may be intentional: it is a credit to him that his work is able to provoke such thinking.

The story is ostensibly a ‘tour’ of an insular, isolationist and crazed city-scape. There is heavy irony in the name. Translated to ‘beautiful garden,’ it suggests open spaces, cool flora and pleasantly scented airs. What actually emerges is a 1984-esque, grimy, controlling and paranoid construct. The voice, predominantly that of the guide, is at once specifically individual (offering disallowed anecdote and personal reflection) and the voice of humanity crushed by the weight of systematic control. On one level, the book is a critique of enormous institutions that overwhelm the human being.

Cutting the story into unequal sections creates a tour-book-style set of descriptions, delineating districts and locations like differently shaded areas on tourist maps. The effect on reading these sections, especially as they change from descriptive detail to opinions (see below) is of an anxious haste. One is left with the impression that being a visitor here is almost forbidden. There is a steadily building sense of menace, until it spills into a violent conclusion, when the one being guided—the ‘you’ up till now—takes on the ‘I’, and is left to face the dangers of the place alone.

The sections are akin to monographs, all centred on the depiction of the city. Thematically this is a landscape of fear, repression and danger. There are extremes of rich and poor, unrealised tenderness in unlikely places, oppressive, fascist politics and what could be a severe critique of modern capitalism: the injunction to work fourteen or so hours a day, when all workers (all adults over school-age) are locked in the tall glass monolith buildings, leaning at feverish angles to accentuate their looming presence. The main roads are a constant stream of mechanised death: the crossing lights are too short, the vehicles are nose to nose and one must be careful no blood is splashed onto one’s shoes from the latest victim. No sense of mortality or recognition of human suffering or human connection is allowed here in this post-modern creation. Strong stuff, indeed.

Going deeper, a reviewer of a previous work of Lowe’s names a “maddeningly logical construction.” The deliberate sectioning of parts is a solid construct in a rushing narrative. It is logical, indeed, for a heavily monolithic city to be described in parts: in bricks of description building it up. Yet the description is about implied details, hints and ambiguities that are wide open to interpretation. If “maddeningly logical” describes the clash and strain of flexible narrative breaking against consistent form, then Lowe is infuriatingly logical in his writing. The “relentless intensity of imagery” the reviewer ascribes to the earlier story, is present within Beaujardin, but it is due to the deliberate non-describing of actualities and landmarks. The reduction of physical detail is conversely proportional to the narrative moving into personal soliloquy; the desperate desire on the part of the guide to make his mark on the mind of the visitor, despite bending rules and saying and showing that which he admits is forbidden.

The city is not so much around in physical form at this point as embedded, in the way of repressive regimes at their worst, within the psyche of the citizen. Yet even as the landscape of the narrative changes from physical to psychological there is never any doubt that this is still The City. There is now a merging of what is seen (sense) and what is thought (response) into a single place where sense and response meet when one replies to the other in the ordering of the intellect. The city now stands as a map of the human mind, in a metaphorical tour of the self. The guide is a nervous, haunted Virgil, always looking over his shoulder for some demon-manifestation of the city- guilt, perhaps?—to come and claim him.

Eventually we have to ask: is the reader, invited by the act of reading into this place and time, a visitor, or are we actually the guide, walking in areas of uncomfortable questions and painful revelations that could well await us should be probe into our own minds and souls? The death of the guide in the end would be worrying indeed in this context, if there was not the switch to the visitor’s viewpoint. This appears an exemplar of a change in mental tracks; expressing the flexibility of the mind moving from one viewpoint to another. But the nightmares will still haunt us: wherever we go, we take ourselves with us; the ‘I’ of the narrative might have changed over, but remains indisputably ‘I’. The awakened interest of the dark denizens of the city-mind; those thoughts we would rather disavow, but which still linger in the gutters of our subconsciousness: mental derelicts of the subtitle, and against which the new narrator (the new consciousness) needs to defend itself, is a dire warning against thinking oneself too civilised and dabbling too lightly within dark places. The forbidding style and repressive surface politics of the city (see above) is mirrored in the implied injunction that such dabbling, such soul-searching is likewise forbidding and forbidden: one will not find answers in pure introspection. Indeed, it might lead to one’s doom. Be warned that even the guide has paid the price for his transgression.

The short, statement style is common to Lowe’s writing. A review of other forums for his work present short stories and longer works cut into smaller bite-sized sections. Perhaps this is a comment on the intensity of a moment making a lasting impression rather than an elongated experience. Or perhaps this is homage to the cut-away edit that, once adopted by early cinema in the 1920s, revolutionised how stories were told and paved the way for the concise style of the ‘classic’ cinematic style. That is, the beginning of shortened attention spans as input becomes shorter, faster, and more immediate. The immediacy of Lowe’s writing is one that smacks right into the cerebrum: a filmic trick that comes from the hurried pacing of the story, the hurry of the guide and the creeping uneasiness, finally ending in a blaze of guns that would not be out of place in an apocalypse film or last-stand dramatics.

The book itself is in chapbook format: printed on thick, cream-coloured paper with neat, slightly old-fashioned looking print, there is an air of a historical document, even a testament. There is definitely criticism of modernity in here, but also an ironic embracing of it, in the cut-up presentation and in the elements of filmic melodrama.

As an existential exercise it is robust. As a surreal tale it is a success. I was entertained and intrigued. I enjoyed it greatly; perhaps this was down to the size (that short attention span again!), but any longer and it would have failed as a sketch piece. It is provocative: obviously and deliberately so. Unconventional in its length, presentation, and style, this is a mental exercise, an outpouring of a creative bubble. The written words begin and end decisively, but after finishing, it felt as if I had stepped into a longer story I can almost read at either end: speculation on the previous life of the guide and the fate of the visitor. Perhaps this is Lowe’s biggest existential message; nothing exists in a vacuum, and has reasons before and effects after. Left with an impression that I had been lead to respond as such, in blatant and playful juxtaposition to the pithy presentation, the best way to sum up is not at all, but to leave with a...

Buy this title from ISMs Press
Posted by Djibril at 18:13