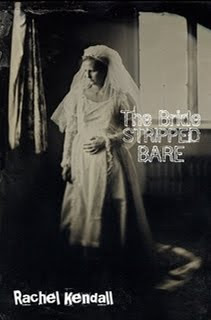 I imagine the author of these stories composing these tiny, incisive works of fiction as if she were setting up one of those miniature theatres, made of paper, in which the characters are poked onto the stage to perform their predetermined roles. With the sweetest of smiles, Kendall will begin to make them suffer. Taking its title from a 1923 art work by Marcel Duchamp: ‘The Bride Stripped Bare by Her Bachelors, Even’, this collection sets out to replicate Duchamp’s project of depicting the erotic relationship between men and women. Kendall’s perspective, however, is entirely of the 21st century. Although the stories are played out in the real world, this is life stripped of the comforting veneer of civilization.

In ‘The Seedy Underbelly’ a woman indulges a craving to consume a can of motor oil and vomits up a child, of sorts – part machine, part human: “An adorable little thing with a knife blade grin”. In these stories the maternal instinct is subverted: mothers exploit or exterminate their children; they fear their unborn infants; they are haunted by the idea of giving birth to monsters and often they do.

What is bleak is not necessarily the subject matter as the underlying philosophy. For this author, for these characters, happiness is illusory. What is real and vital is sex and its corollary, death. For Kendall, the death of a character is a significant, creative act, not just a cheap way of getting out of a story. There is something of Clarice Lispector’s dissecting analysis in these tales of banal events which achieve a sudden erotically charged summation. The narratives are honed down to the essentials; the characters seem to coalesce around a single event. In ‘Fly’ a couple lie festering in a bed surrounded by the detritus of their consumer lifestyle until one of them takes it into his head to swat a fly leading to his spectacular and comic annihilation.

The themes are elemental and unerringly sexual: pregnancy, rape, mutilation, deformity, prostitution. Animals and birds squirm in the corners of narratives or howl distantly against a backdrop of blasted trees. But, despite the obsessive darkness of the stories, there is something unflinching about Kendall’s gaze that makes the work compelling. There is no space for authorial disapproval or moralising. This is existence, the stories seem to say, and that’s all there is.

Some of the stories contain coherent narratives in which the characters seek consummation and are, in various ways, satisfied. ‘51 weeks’ takes us into the world of a sado-masochist who seeks the ultimate experience. This is a chilling, but intensely and powerfully written story that touches on the very heart of modern society’s self-destructive alienation.
Other stories, cut loose from narrative convention, seem to drift into a fragmented world of desire and decay. The pieces come to life with a sudden shocking image and the characters wander into the stories like ants into fresh paint. “Watch out,” you want to shout, “Don’t go that way!”

‘Snake’ is one of the pieces which dispenses with narrative convention altogether. In this brief fictional flight, Kendall presents us with a woman, Rosario, who waits for the arrival of a doctor who will perform an operation. But we are never sure of the precise nature of the operation. At times Rosario’s dread implies that the doctor has come to perform an abortion but this is never made explicit and this infuriating lack of certainty is what gives the story its strength or, for some readers, represents its major flaw. I don’t think Kendall wrote this story to satisfy readers who want everything explained. In ‘Snake’ objects mutate, giving the reader the unnerving sense that nothing is quite what it seems. Is the doctor really a doctor or is he a murderer or a priest coming to exorcise evil? Rosario herself seems uncertain about her situation: at times she is petrified, on the point of fleeing; at others she anticipates a state of euphoria. The story is a mere three pages long but it manages to convey Rosario’s changing perspective, her emotional fragility, in depth. Kendall achieves this emotional intensity by presenting the reader with one inexplicable image after another. The story disorientates the reader from the first sentence: “The flotsam and jetsam of insectacentric circles spelling out precious words on the wall. Murder and blood.”

We make of the story what we will. Kendall seems not to care whether we are following or not, yet, with each disjointed image, the story builds to from a multi-layered object, which, like Duchamp’s sculpture, depicts a fragmented whole, a contradiction, a verbal puzzle which must be different for each reader. This is no easy task, since Kendall risks alienating her reader, but what we finally perceive is the central female character, stripped of accepted meaning, violated, but also, somehow, remade and liberated.

Rachel Kendall is fond of manipulating her characters in unexpected and often horrible ways. Only a few of the characters seem to escape this manipulation: in ‘Eat Me, Eat Me’ the apparent victim turns out to be play-acting. And in ‘Solid Gold’ a woman comes into possession of the essence of her cravings. Whilst these two women exercise some element of control over their fate, more often the characters seem possessed by a paralysing lassitude. Their fates have been sealed and they know it; they are merely puppets acting out the fantasies of their creator, who treats them with dispassionate disdain. Men are stripped of their masculinity, women of any vestige of femininity or maternal aspiration. Doom flickers like the bonfire of all their extraneous characteristics – every fibre of vanity or virtue, up in smoke.

This collection is not an easy reading experience, nor is it in any degree comfortable. There were times when I longed for some relief from the pervading atmosphere of existential gloom, yet there is also an invigorating originality in these stories which makes them irresistible. The stories are often experimental and in these days of anodyne and formulaic cultural expression, we must surely celebrate the nerve of an author who takes a calculated risk and pulls it off with such panache.