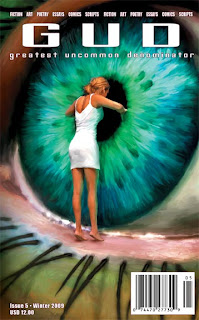 Stephen Hawking is reported as saying that if we find intelligent life out there somewhere, we should not attempt to make contact, presumably because to do so would be very dangerous indeed. Well, T F Davenport’s story ‘Nature’s Children’ makes abundantly clear some of the potential perils and disasters inherent in inter-species contact, not least the complete misunderstanding and incomprehension on all sides when faced with alien culture, civilisation and behaviour. The story is, quite frankly, a masterpiece, complex, beautifully observed and set against a vivid, lush backdrop of a planet seething with life, both animal and vegetable. It also sets the standard for this impressive, but sadly (at least to me) unknown journal, GUD.

The cover art, ‘Soul Searching’ by Michael is striking and gorgeous and sympathetic with the style and feel of the material inside. Paperback-sized, neat and manageable, GUD is a pleasure to hold, look at and read. Its content ranges from fiction, poetry, factual articles, a play and a pair of wonderful comic strips. The general flavour is science fiction but there are other ingredients in there to spice and surprise. The standard is readable-literary, by which I mean, strong story, characterisation and all written in a mature and literate manner.

Straight SF is represented by the likes of ‘Getting Yourself On’ by Andrew N Tisbert, an extended tale set on the asteroid Ceres. The workers have signed their souls away to the company and to ensure maximum, uninterrupted production, they are required to literally leave their personalities a home when they set off to work each morning. Kenneth Schneyer’s ‘Liza’s Home’ is a tale of time travel and its resulting paradoxes. This is a truly moving, haunting examination of the chaos, both physical and emotional, that could be left in the wake of a rogue time traveller striving to put right a terrible past wrong.

The opening story, ‘Imperfect Verse’ by Rose Lemberg is the lone fantasy work, an odd, dream like, folkish, myth-flavoured work which is fantasy in its straightest form. Realism, forget it; angry dwarves and ethereal elves, none in sight (thank goodness). A difficult story told with great energy and confidence.

Isabel Cooper Kunkle’s ‘Aftermath’ has that element that I like to call “satisfying ambiguity”. Something has happened, a disaster, people have armed themselves, handguns have become fashion accessories, skyscrapers are in ruins, but apart from dark hints and sideways glimpses, we are never sure of the nature of the cataclysm. ‘The Tiger Man’ by Geordie Williams Flantz (is this the three-name issue of GUD?) is another ambiguous, strange piece, as seen through the eyes of a child. His interpretation of events? Reality?

Familial violence is explored in ‘Birthday Licks’ by Kevin Brown and the relationship between loner and the young son of prostitute is revealed, uneasily, disturbingly in Steven J Dines’s ‘Lost Lying on Your Back’. Two sharply written, vivid and intense with carefully drawn, believable characterisation.

Moving into the graphical stories we have Sydney Padua’s ‘Ada Lovelace: The Origin!’ which presents two alternate versions of the relationship between Charles Babbage, inventor of the Difference Engine, and the mathematical genius and daughter of Lord Byron, Ada Lovelace. Apparently this story is already out there on-line and has something of a cult status; funny, witty, the artwork style fits perfectly with the tone of the tale. The other graphic is an energetic adaptation of Kipling’s ‘Gunga Din’. The script was written by Joseph Calabrese, the artwork by Harsho Mohan Chattoraj.

As I mentioned earlier, there is also a play, ‘Sweet Melodrama’ by Tristan D’Agosta. This is a delight, a whimsical, pseudo-Shakesperian tale of romantic quadrangles, mistaken intentions and cunning plans. Deft wordplay, strong characterisation and a rhythm make this an excellent play for a public reading.

Poetry is sprinkled throughout the journal, its subject matter varied and is style always readable. ‘Suggestions for Distributing Your Poems’ by Tammy Ho Lai-Ming perfectly sum up the pain of getting your work known, understood and accepted. Alicia Adams’s ‘Deadman on the Titanic’ begins on the deck of an ocean liner and ends with discussion on the nature of anachronism and global warming, even as the vessel careers into an iceberg and ice is showered onto the deck. Again, witty and immensely readable. Melissa Carroll gives us ‘7 Ways to Fake an Orgasm’, a perceptive and very funny guide to fooling the man who shares your bed.

Tel’s favourite? ‘The Pearl Diver With the Gold Chain’, Paul Hogan’s fable of a drifter and a very special talent that involves gold chains and radio waves. There’s a Bradbury-esque whimsicality about this story, it is original, haunting, moving and immensely entertaining.

All this and more, not a weak or badly written story in the bunch, honestly. I can't remember the last time I read a periodical and was impressed by every single work between is covers. There is variety and originality, and a tension created by the range of genre and material. One minute you are at some point far across the universe, the next in your own street, not one story is in anyway predictable. The narratives were engaging, the characters three-dimensional. There was a maturity about GUD, born, I think, of careful selection and sharp editing. Definitely a publication worth further exploration.

Buy or subscribe to Greatest Uncommon Denominator Magazine
Posted by Djibril at 04:34