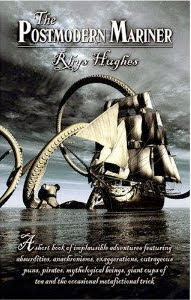 A delight, that’s what this book is. Funny, touching and as easily digestible as Frabjal Troose’s ginger biscuit moon that hangs over Rommel Cobra’s Sea of Tea. Yes, we are in the surreal, unpredictable and often achingly funny universe of Rhys Hughes. Hang logic on the hook by the door, suspend disbelief over the clothes rail to dry and only enter if you have a sense of humour and a love of the absurd. The Postmodern Mariner is a slight book, decorated with stunning cover art by Steve Upham and split into three distinct but linked sections, which are all part of Hughes’ 1,000 linked stories masterplan, a monster story cycle spread over anthologies and magazines everywhere.

Section one introduces us to The Munchhausen of Porthcawl, one Castor Jenkins, raconteur, expert on just about everything and teller of very tall tales indeed. Here you have, among many other momentous events, a rugby match in Valhalla, a trip to a distant planet in a lighthouse and a birthday party for Cthulou (told in authentically overblown Lovecraftian prose), and all related to Castor’s long-suffering drinking partners, Paddy Deluxe and Frothing Harris.

Castor is an intriguing creation, someone who you would like to disbelieve but, can never be sure that his claims of abduction by pirates and previous lives as an Ancient Greek philosopher and a poisonous plant really are mere figments of his fevered imagination.

Section two, Piper at the Fates of Ooze comprises a single, longer story featuring the lovely Catherine Piper of Portia Terrace, Swansea. In ‘The Lip Service’ Catherine, lonely and in need of a kiss, receives a package intended for the wonderfully named Globigerina Ooze, whose address is a house that has long been demolished. As the narrative unfolds we discover the true nature of a kiss, the belief that everything destined to reach you, will reach you one day and the sad saga of Nathan, The Room of Lost Things and Globigerina’s true identity.

Section three, The Postmodern Mariner in Person once again consists of a single, longer tale, this being ‘Rommell Cobra’s Swimming Carnival’. Armed only with his laptop computer, arch blogger, The Postmodern Mariner finds himself in the Tavern of the Long Lost Sea. There he learns of the infamous Sea of Tea, which fills an immense cup and is dotted with islands of rotting tealeaves and icebergs of sugar lumps. Here be pirates including the gorgeous Charlotte Gallon and one China Melville, a man obsessed with the paranoid whale known as Moby K Dick.

Through many perils and absurd and surreal adventures, which take him on a cable ride to end all cable car rides and an encounter with the mighty oc-tea-pus, the Mariner learns the secret of the ginger biscuit moon and unites the pirates of the sea of tea in a momentous and hazardous revolt against the despotic Rommell Cobra himself.

As always Hughes is inventive, flamboyant and very, very funny. However, I did find his book a much lighter read than some of his other material, The Smell of Telescopes for example. Not that this is a bad thing, but there were moments when I found he brevity and lightness a little disappointing.

For the uninitiated, The Postmodern Mariner is an excellent place to dip your toes into the ocean of inventiveness and extraordinary ideas that is Rhys Hughes’ fiction. For the Hughes devotee, although there is more than enough to amuse and satisfy, I fear there is not quite enough rich Welsh mutton to fully satiate.

Having said that, this is a welcome slice of insanity, accessible, relentlessly entertaining, fast paced and engaging. Here the Marx Brothers meet Family Guy en route to Monty Python's Flying Circus. It is Arthur C Clarke’s Tales from the White Hart on LSD.

There are insights in these pages, sideways glances at the human condition, at greed and love and the sheer absurdity of our desires and foibles. ‘The Lip Service’ for example, is, for all its madness, a touching and almost moving story, the nearest I have read to a Rhys Hughes romance.

The Postmodern Mariner then, best summed up in the words of those notorious, Sea of Tea pirates, the Shaun brothers.