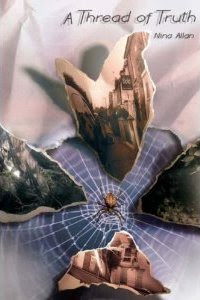 Delicate and fragile as a spider’s web, that’s what the stories in this collection are, carefully woven together with such subtlety that a moment’s distraction will break the spell and quickly obscure the meaning. The clues are there, you just have to hold your breath, tread carefully and read, instead of simply reading. A Thread of Truth is published by the intriguing Eibonvale Press and comes complete with yet another, striking David Rix cover. Eibonvale are making a name for themselves with the sheer physical gorgeousness of their books and this in no exception: the artwork really does reflect the stories, its splintered images redolent with enigma and flavoured with menace. (Disclaimer: this reviewer has a novel accepted by the Press.)

The collection starts with ‘Amethyst’, in which a young girl glimpses a layer of truth behind the facade of her best friend’s family. Or does she? Perhaps they are who they say they are. The story contains a paragraph that, for me, sums up the whole book; “I had never learned to read music. The notes she had spaced on the five ruled lines were just dots to me. I ignored them and read the words.”

‘Amethyst’ is followed by ‘Ryman’s Suitcase’ with an opening that is pure of W Somerset Maugham. Here we have the locum who has taken over a missing GP’s patients, the woman who wants him, an unsettling children’s party clown and the mystery of the missing doctor himself. An intriguing mix and, again, the clues are there...

Closing ‘Ryman’s Suitcase’ we are taken, abruptly, to a planet called Magna and presented with the mystery of the dragons that are part of its fauna. ‘Bird Songs at Eventide’ is set in a research colony on that world. There is no going back to earth, these people are committed and it is the sense of being cut off from home carefully melded with the excitement of discovery that gives the story its tension. “We’re seeing things for the first time.” Says one of the protagonists, “Nobody’s done that for centuries, not since Columbus or Vasco De Gama.”

From Magna we travel back to Earth and a road called ‘Queen South’ where a young man, engaged to be married to the talented Lisa becomes fascinated by a blonde girl who is the very opposite of his fiancée, who is as spontaneous and affecting as she is infuriating. Again, a story with delightful subtlety and gentleness.

The feisty and demanding Justina leads us from ‘Queen South’ to a hotel called ‘The Vicar with the Seven Rigs’ on an adolescent expedition to break into the place, as much a test of her admirers’ devotion as curiosity about the old building. The characters are vivid and each one individual and carefully drawn. The story starts simply enough but ends as reality shatters into disorientation and uncertainly. What are we seeing? What has happened? Effective, discomforting.

‘Heroes’ is filled with travellers, including Wal Carter the lorry driver, a pigeon called Hero and her enigmatic, eccentric owner. Everyone the young protagonist meets has a past. Are they interlinked, or just part of the structure of their lives? And then there is the legend of Hero and Leander, and the untimely death of a young violinist in a plane crash. Sadly not quite as engaging for me personally as the other stories in the collection, ‘Heroes’ is, nonetheless an intriguing brew.

Still travelling we reach the ‘Terminus’ for a journey on the Moscow underground. A dark, claustrophobic tale this is the nearest Nina Allen get to horror in his collection, but even then it is dreamlike and more unnerving then horrific. From the very outset of the trip we know that something is wrong, that something is going to happen...

And so to the final ‘Thread of Truth’, the title story, the longest story and my personal favourite. This is a wonderful, subtle, fragile narrative about an arachnophobe who tries to cure himself by enrolling on a spider hunt in my own home county of Suffolk. The narrator is a fully realised, affable character who is quickly drawn to one of the female members of the spider hunting group. Their relationship is painted with a light touch, the object of his affection, pleasant but enigmatic and at the story's heart, as with ‘Heroes, there is a very disturbing legend. This is the most compelling tale in the collection, and the most direct though still painted with light, pastel strokes. A wonderful climax to the collection.

A Thread of Truth is not without faults of course, the most irritating being the fact that it is not always easy to know the age and sex of its protagonists until well into a story. Perhaps this is part of the ambiguity, but it did cause me to stumble a little in a couple of cases when I realised that the image I had mind-painted of a character turned out to be way off the mark. The proof reading could also have even tighter; again, while not shatteringly bad this does interrupt the smooth reading of the text.

None of these, however, detract from the sheer, delicacy of this anthology. It reminded me of a Thelonius Monk jazz piece, the theme fragile, everything held together by the finest of threads. There is originality here, unpredictability. There is no second guessing, no obvious ending looming on the horizon. These stories have to be taken away, thought over, pondered. A collection, then, for those who don’t want the obvious, who dislike being told all the time, who like to be left to work it out for themselves. Stories that are offered, then released to the reader.