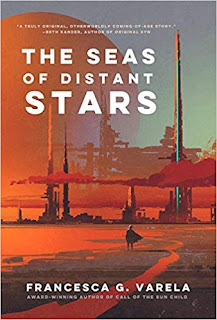 The Seas of Distant Stars is a variation on the alien abduction trope. The protagonist, Aria, is a “preverbal” little girl who is mobile, goes down the steps into the front yard as her parents are resting inside, and is abducted, we don’t see exactly how, and the next we know she is on another planet. One of the first things that we see happen there, on Deeyae, is an annual medical checkup, which we find out later is only for the “exchangers,” or abducted earthlings; apparently the Deeyan scientists are interested in seeing how the abductees develop physiologically—possibly to apply to their own population, as the Deeyans originally came from Earth, known there as “the Water Planet.”

This is not indicated as a YA novel, but it could well serve as one, as the emphasis throughout is on the development of Aria, or Agapanthus, as she is known there. In fact, Agapanthus is shown to go through a number of emotional stages developing girls/women do on Earth, many of them having to do with becoming part of society, but in this case there is the added complication that these people are aliens, and know that they will be returned to the Water Planet some day. Agapanthus’s foster family loves her, and she them, but there is always a distance on their part, while Aga yearns to be accepted fully as a Deeyan, and accepted as a real, not a foster, daughter by her “father,” Pittick. Indeed, Aga wants to undergo the rite of passage into Deeyan adulthood that consists of swimming from the island she lives on to another one across a stretch of the Waters; exchangers are not supposed to be strong enough to be able to do this, and she is discouraged from even trying.

The chapters are named based on the various ages Agapanthus attains at different points in the plot: after the Prologue, on Deeyae the chapters are 1: Ten Earth-Years, 2: 13 Earth-Years, 3. 16 Earth-Years, and so on up till her return to Earth, at the age of 25 earth-years (Deeyan years are shorter). The transportation to Earth is not via spaceship but through some sort of direct “translation” of the body that is not described in any detail. Perhaps this is a sort of forced “jaunting” as in Alfred Bester’s work. In any case, there is a progressive personal and social development in an alien and temporary context, and neither Aga nor any of the other exchangers can remember anything of their past on the Water Planet.

It is odd that Earth is called the “Water Planet,” because on the Deeyan island where Aga and her family live, they are surrounded by a sea, and eat raw seafood from it, apparently exclusively; the job that Aga most loves is the one where her foster father works and mentors her, which is the fish plant. The enormously large sun, Imn, and the twin stars, Aamsh and Jord, loom immensely on their consciousness, not only because of their light, but also because they are the homes of the gods, who communicate only to certain individuals, and must give their approval to any projects either Deeyans or exchangers contemplate, and that give their commands through The Contact, the Deeyan chosen by the Gods as their mouthpiece.

Deeyae always feels like a barren place, as if an artificial backdrop on a 1950s science fiction movie, or one of those planets visited by the Starship Enterprise in its first incarnation. Possibly this is because the author, Francesca Varela, has degrees in environmental studies and creative writing, and it is Earth that inspires her. When (SPOILER ALERT!) Agapanthus/Aria is returned to Earth, she is almost overwhelmed with the richness of the diversity of species here: “The ocean was a vast blanket of richness, of swishing and chopping waves, of movement and damp-earth smells and never-ending wind” and of the wind, she says “[t]his was wild, heavy, powerful wind. It made the loose sand dance. It had, long before, molded the shore trees until they were bent and craggled; all branches pointed inland, away from the water” (195). This reader felt a great relief when Aga/Aria was returned to her home planet, simply because the descriptions of nature were so much richer than those on Deeyae.

Another aspect of the alien-abduction trope that is explored here is the memory that some of the returned abductees have of their time off-planet, and of the reaction most earthlings have to these recollections as either hallucinations or fabrications. Aria becomes fascinated by reports of ancient aliens on Earth, and tries to link these reports up with her own experience, although she ultimately makes no sure connections here. At the same time, the pairing of von Daniken and Whitley Streiber—neither of these names is mentioned, though Chariots of the Gods is—of these aspects of UFOlogy, suffices to show the readers what impression Aria’s story makes on her family, teachers, and the like. There is even a reference to the National Enquirer as a possible venue for her publications.

Perhaps a major thrust of the novel occurs through the reader’s immersion in the life on Deeyae, followed by Aria’s return to Earth and the subsequent disbelief of the others to her story. What may or may not be intended as humor emerges from the mention of a program called Ancient Aliens: “Through all her research, Aria had never heard of it. Evidently she needed to watch more TV” (187). A psychologist she is sent to says that her “memories” of life on another planet are a “defense mechanism” her mind has generated to protect her from a traumatic experience. Her stepbrother Max—after her abduction, Aria’s parents divorced and Max is the product of her mother’s second marriage—says, “There you go, Aria. Be a writer… Write that shit down” (158). Of course, I’m sure that by “that shit” Max means nothing denigrating, just a teenager’s colloquial expression for “that stuff.”

In an odd sense, The Seas of Distant Stars might be seen as a variation on the movie version of The Wizard of Oz, where Dorothy has no memory of Kansas, yearns for acceptance in Oz, which is the only place she remembers, then must accept the planet, rich and teeming with life and biodiversity in a way that Oz is not, when she is returned there. Perhaps. Or maybe Varela is suggesting to us that she herself may be channeling memories of another planet…
Posted by Djibril at 11:21