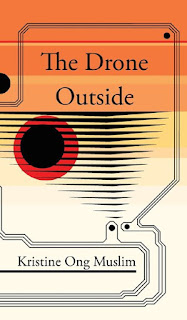 Eibonvale Press have started a line of Chapbooks to complement their high-quality catalogue of speculative fiction novels and story collections, kicking off with this volume of nine interrelated flash stories by Philippine author and poet Kristine Ong Muslim. The Drone Outside is a series of snippets of life during or after the apocalypse, told from unusual points of view, or with surreal narrative, or or evidencing unexpected scenarios of death, destruction and post-humanity. There are several threads that weave and recur through this small book, but ultimately it does not tell a single story with a plot arc and satisfactory dénouement, there are no real POV characters or protagonists. These are all prose stories, but at times the writing reaches the stylized and beautiful heights of Muslim’s science-fictional poetry; at others it is grimly, defiantly prosaic (or dramatic, or epistolary) as the setting requires. The Drone Outside sets a scene, builds an atmosphere, reminds us that the end of humanity is unlikely to be glamorous or exciting or full of Golden-Age heroism and action sequences. Sometimes a lot of fun, always gorgeous and enlightening, but also surprisingly heavy for such short pieces.

It is hard to talk about the individual stories in this collection, because while they are quite varied in both voice and theme, they do not so much stand alone as form chapters in a coherent—albeit patchwork and mosaic—whole, itself not much longer than some short stories. Perhaps the closest to the free-standing story is the opening piece, “Kilroy Was Here,” a post-cyberpunk vignette in which a small, mostly unnamed revolutionary group storms and destroys “the machine” in 108 Tower at 9 Elone Street (an event and address that will recur in later stories). Deliberately lacking in detail and description, the story instead of characters or plot focuses on the impact of “the machine” on our world and our lives, to the point that its unplugging changes that world at a philosophical level.

An example of a genre of story that I have always loved, postmodern ekphrasis, “Anno Domini” is a snapshot of a surreal futuristic museum in which the visitors are as much part of the exhibit as the modern art, religious paintings or aquarium. As well as being cheekily inventive and a lot of fun, this story contributes nuance and grim shadowing to the growing foreboding of this slow but sure end of the world. Following from this, “Eventide” is a short tale of collective nightmares, where the dream seems as real in the waking world as in the sleeping horror, as color is leeched methodically from the world. The next few stories show a mix of mundane and horrific details, including haunting, madness and murder as humanity loses its collective mind, and hopeless hiding in bunkers ominously reminiscent of When the Wind Blows.

The book ends with “Boltzmann Brain,” a story that may feature characters who briefly appeared in an early piece, eerily inhuman but chirpily optimistic at the same time. The message is one of hope—an almost impossible, unimaginable hope, but something to hold onto and work towards nevertheless. Isn’t this what we’re all living with?—in a world that will certainly end some day, and long before which our own lives will expire, but we still have aspirations, dreams, and purpose. The inhuman characters may be the most familiar to us in this entire collection, and that’s clearly no coincidence.

This is a lovely little book, both a welcome and characteristically brilliant addition to the short and poetic work of Kristina Ong Muslim, and a promising start to Eibonvale’s foray into short works or collections. That such a rich and satisfying piece can be delivered in under 50 pages, and to the usual high editorial and production standards of this press, bodes well for their future offerings.
Posted by Djibril at 11:52