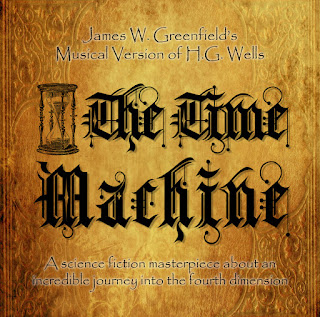 The first track “The Time Machine” sets the tone, which goes right through the album, of creative uneasiness: after some introductory sentences, a simple-but-listenable synth riff, enlivened with squeaky electronics, is brought down by a portentous enhanced voice that repeats “The Time Machine” at intervals until we get back to the narrative. It sounds like late-sixties psychedelia without the saving grace of listening to it while under various influences. The second track “The Fourth Dimension” isn’t much better, and it’s only with the third, “Into the Future,” that a simple pulsating three-note riff propels the account of the traveller propelling himself into futurity. It’s simple, but it works! And though we are almost immediately brought down by some weak vocals repeating “into the future,” Michael Oerenstein (playing the Traveller) brings back a sense of urgency and drama which stays in his performance throughout, and it is effectively underscored by Harry Asher’s guitar playing.

“Let’s Go!”, after the largely-narrated “The Eloi,” is a conventional song that could be about any discontented person singing to their lover that “new worlds await us”, and in this context it, and the succeeding song “Like You,” rather undermines the effect of sexual anxiety which The Time Machine gives us today, with Wells’s Traveller’s insistence on the “androgynous” (he is not even sure that Weena is female) and “childlike” natures of the Eloi in favour of a safe but bland attempt to contradict what Wells was (or so I think) wanting to point out in the relationship between the Traveller and Weena. Instead, the rewritten text at the end of “Let’s Go!” refers to “Weena, who I was beginning to fall in love with,” and you start to wonder whether Greenfield was getting his inspiration from George Pal’s 1960 film version rather than the actual book in which the Traveller seems to be much more emotionally detached from what he initially sees as Weena’s “mere childish affection.” That said, the fusion of music and narration in the last track of the disc, “The Morlocks,” works extremely well in creating a sense of melodrama, and the Traveller’s realisation in “The Palace of Green Porcelain,” which begins the second disc, that the Eloi are simply meat for the Morlocks is brought up to more shocking effect if you assume that Weena is someone he actually loves.

The Traveller’s escape and (accidental) journey to the future works very well. The riff that power’s “The Escape” sounds familiar to Led Zeppelin fans, but it’s a good riff. “World’s End” tales us to the famous beach beneath the red sun. The faint exoticism of “Beyond the Galaxy” aims to raise the question of where the Time Traveller went after his brief return to his own time.

While less engaging than the Jeff Wayne album that sparked the project, this offers entertaining if not necessarily challenging listening. It’s a soundtrack of fairly easy-listening rock music which does the job of being a soundtrack. Wells fans would have a lot to criticise in the piece, though as an adaption it certainly bears a second and third listening. To stay on the right side of hackneyed melodrama is no easy task, and despite what I have said above, The Time Machine pretty much does this. It’s best to stay fixed on the idea that this is a soundtrack rather than a rock opera. None of the actual songs have the poignant appeal of “Forever Autumn” from The War of the Worlds. Indeed, “Where Are You Now?”, sung by Nathan Nasby, retreads the emotional territory of that song rather too obviously and coarsely. Still, if this was a stage performance with a visual backdrop I would go to it and feel that at the end I had had my money’s worth. If it sounds snide to Greenfield to say that The Time Machine sounds in places like it is a demo for an unproduced Big Theatre musical show, then can I say that I would really like to see that show.
Posted by Djibril at 11:14