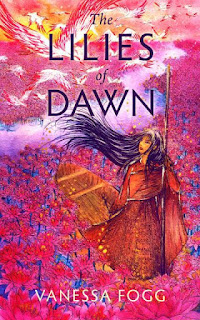 The novella is an underappreciated form; too often a reader can look up from a novel’s “soggy middle” and wish that some content had been streamlined, or finish a short story and wish that there had only been more. Vanessa Fogg’s The Lilies of Dawn is exactly the right size for the story that it wants to tell, a deliciously atmospheric tale that blends fairy tale and fantasy. I read it through in one sitting and you should consider doing the same.

The eponymous lilies of dawn grow in splendid isolation in the countryside, treasured for their use in medicines, and watched over by the Dawn Priestess. Kai is the latest in the long line of such priestesses, but she is preoccupied with a flock of destructive, mystical cranes that are slowly destroying each year’s crop, and the failing health of her mother. Without the medicine distilled from the lilies’ nectar, her mother, and many others, will die.

Into this grim scenario comes Kevak, a handsome doctor from the city who has come to study the lilies himself, and perhaps offer a solution to the problem of the cranes. Kai is attracted to him, but not altogether enamored; his coming is too mysterious, and some things just don’t add up. Eventually she confronts him, and he reveals the truth: He is the leader of the cranes, a daino or demigod transformed by his enemies, and trying to do the best for his people that he can under the circumstances. Because it is the Year of the Crane, he has been able to transform into a human, briefly, and try to effect a cure—if Kai will help him. But to save Kevek and his people, the price will be that year’s nectar harvest and so, possibly, her mother’s life.

I hesitate to say more about the actual plot of Lilies because reading it was such a treat. Fogg’s writing is incredibly vivid and at times poetic; it makes me wish that one day it will reappear in a heavily illustrated edition, especially given the lovely cover art by Likhain that already graces the slender paperback. Fogg is also incredibly skilled with detail and world-building; Kai’s relationships with her mother and her sister, and her own ambivalence with her calling, all rang true, as did her interest (I hate to reduce it to “fledgling romance”) in Kevak. A Dawn Priestess cannot marry; rather, it is her lot to, in her own time and choosing, discretely take a lover, and of the children that she will bear a daughter will eventually be her successor. Kevak offers an alternative, a lifetime of love and luxury rather than just duty and isolation, and it is incredibly tempting.

That this seems like a genuine crisis of choice and conscience rather than a plot point speaks to Fogg’s skill in sketching a new world within the margins of her story. And at their heart, many fairy tales and fantasies are about making a choice with full knowledge of what it entails, not just for one’s self but for one’s broader world. In Kai’s case, her choice can make or break the lives of Kevak’s people, or her own, made the more difficult because neither of them is in any way at fault, but only at the mercy of misfortune. And yet, Fogg is able to take this dire question, and submit it to the reader without rendering it utterly bleak, and indeed, with something like hope. This is no small feat; far from it. Fogg is an incredible writer, and I look forward to more of her work.
Posted by Djibril at 16:23