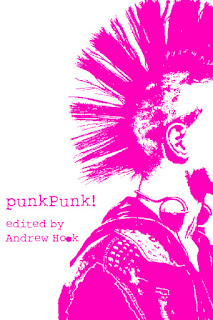 Published in January 2015 by DogHorn Publishing, punkPunk! is a collection of short stories unified by a peculiar cultural phenomenon whose name formulates the title of the book. Defined as an “eclectic mix of stories” (7), its main purpose is to present punk “not simply [as]a static component of history, but a process of evolution and revolution.” Such a statement holds the promise of entanglement and literary engagement far exceeding the chronological reiteration of forms and styles.

Call me a book racist. Call me a shallow ignoramus, I dare you. I will turn the other cheek. For what I am about to write will be a rather harsh rebuke. It is a rarity for me to castigate an author or their book, but there are moments when this Great Inevitable has to come. Regrettably, this fate has befallen Andrew Hook’s anthology, punkPunk!, and the particulars of my decision are presented below.

Having musical associations resounding in your mind, one may imagine a list of the most popular hits that are about to be replayed. This might be a collector’s El Dorado, but all collections bear a mark of over-advertised product. Each epoch has its triumphs as well as skeletons in the closet that one may wish to keep unopened. Punk, as a movement of revolt and denial of tradition, divides societies into its fervent aficionados and those importuned to bear its insistence. Like it or not, punk as a genre can boast about its persistent existence since the 1970s, but the legacy it has formed may leave some doubts.

This peculiar anthology presents a somewhat variegated but, at the same time, unified description of punk, and its significance to the generation of the 1970s, 80s and beyond. Repetitive and nauseating, the stories bear the semblance of tracks listed on a one-time smash—hit record. The very usage of the word ‘punk’ is perverse in its pervasiveness, jamming all frequencies of normality in the fictitious reality.

At first, its presence is rather timid and undetermined, appearing in the form of Hook’s childhood memory. The political and cultural aspects that lay at the basis of the movement, were depicted with warm sentimentalism and witty humor. This description of kindling love to punk gives the readers an insight into what kind of beats played in Hook’s head upon his hearing The Stranglers’ 5 Minutes. Over time, his ‘punk identity’ then established was taken to a higher level once the author of the anthology encountered a story which enabled him to discover that the notes of punk can also be played in the symphony of literature. Nothing innovative, you might say. Nevertheless, it was this literary encounter that allowed Hook to define punk as “a reflective but not nostalgic slice of fiction, shimmering with hindsight and an underlying thread of crime” (6). Concise and poetic, this statement constitutes an entrée into the literary project called punkPunk!

A rather typical presentation of the mostly unknown or niche authors conveys a promise of intelligent punk-inspired literature. With your expectations high you are prepared to encounter a pure uniqueness. How disconcerting it is to discover that once the “Introduction” is behind us, further reading fails to fulfill them.

The opening story by L.A. Sykes and Mark Slade, ‘The Boys,’ can hardly be called an entertaining read. It spits out disenchantment and lack of perspective; the awareness of lost life and being a shamed outcast in British society. Sitting aimlessly in some city pub, the protagonist conducts an audit of the pathetic state of his life, and scrutinizes the country which lost its greatness in his eyes. Bearing a burden of hopelessness, he travels back in time to the “[o]ne last bastion of bothering to be a human being in England in nineteen seventy six” (13). His musings take him to the years of puberty spent with a group of punk-inspired people he calls his “[m]ates.” The escapist memory, however, does little to enliven the story; a description of youngsters engaging in anything in particular deepens the lurid ambiance of the falling Britain presented in the first part of the story.

A collection of brooding personalities with their eerie habits and addictions emphasizes the purposelessness of their existence. These are outcasts and nonconformists cut off from the outside world through music that both invigorated them and fueled their sense of disheartenment. As a result, a motivating punk statement, such as “[w]e were going to rock the country out of apathy and revitalize its denigrated youth” (19) sounds like a bell-weather’s sham validating the mediocrity of the story which, like a political campaign, has lost its momentum. What remains is the dribs and drabs of hope drunk in alcohol and the memory of what is lost.

The following piece brings more optimism into play. ‘Cowboys and Mohawkers’ by Alexei Kalinchuk tells the story of rather vagrant punk teenagers rebelling against the world of adulthood. Troubled on the inside, they are the cause of trouble on the outside, instigating juvenile fights, battling their feelings or lost families. The space the world denies them, punk seems to reopen; among sharp guitar riffs, hard drum beats and yelling, they play and shout their anger, no matter how imperfect the outcome. Despite a rather slow-moving narrative, and a more teenage-oriented content, the story has risen slightly above the level of literary-imbued anxiety, ending surprisingly on a positive note. On the textual level, however, no outstanding creativity could be detected, no play, no shocking sound resonating between the lines.

An exercise in bleakness is performed in Douglas Tompson’s novella, ‘Out of the Box.’ Following a trail of a kid once seen jumping out of Glasgow Apollo ’79, the protagonist learns a story of a lost life stuck in the decrepit building. Deprived of proper lodging, and sources to support himself, he has become a ghost of the punk and person whom he once was. As one of the small number of texts in this anthology, the story is craftily done, with its parts intertwined with excerpts of articles relating to the various bands’ creative history. An academic study of the punk culture and its music mixes with the study of characters whose lives unveil as their conversation progresses. Depressive as many of its predecessors, the story surprises the reader with its reflexiveness, placing the quality of life (and culture) in question.

A more interesting experiment is offered in ‘Blanknoir’ by Stephen Palmer, a speculative story in which punk stands in opposition to the government in the time of the civil war. The fighters for freedom are all united by their love of music as well as the way of life punk presented to them. Full of action, the story takes the characters from one battle to another, placing the power of music against the power of tanks. Partly dystopian, partly alternative history, it calls for such a famous persona as Björn Olsson. Will the coalition punk artists and sympathizers suffice to end the war against the system? Will the memory of punk be enough for the readers to win the battle against the book’s imperfections?

I believe that some fervent punk devotees will surely find value in the publication which Hook not only edited, but to which he also contributed a story. The picture of punk emerging from the stories is heavy, monotonous and loquacious as if all of the bands enumerated in this book—Iggy Pop, The Sex Pistols, The Clash, The Dead Kennedys—have played on stage at once. The variety of places and epochs (with a strong inclination into the 1970s) does not alter the fact that the quality of the stories included was rather unsatisfactory. Perhaps, it is the movement’s repetitive uniformity that does not sit well with me, or it is its ideology that is not kenned directly enough for me to truly grasp its meaning. Offering a “jump into contemporary punk-inspired fiction,” Andrew Hook claims that “[i]t’s not a nostalgia trip” (7). In his short story, ‘You Can Jump,’ Mat Coward adds that “being nostalgic for punk is maybe a contradiction in terms” (184). I assume that in order to enjoy this collection one needs to employ both elements to cherish all if its advantages while disregarding all the pages that should be thrown into a trash can. Otherwise, you, Dear Readers, will punk yourself to boredom.
Posted by Djibril at 17:00