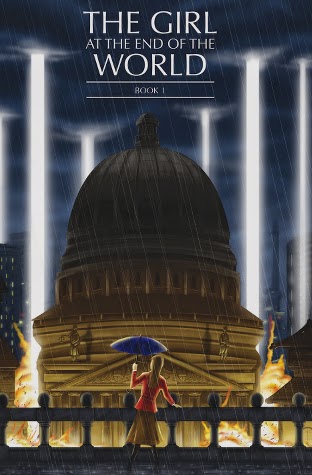 This first volume divides the twenty one stories (and two poems) into three parts. These sections are not explicitly titled, but introduced with short epigraphs that suggest, respectively, 1. a personal apocalypse, “world ending” in the sense of losing all hope; 2. the beginning of the end of the world, “the end is nigh”; and 3. the trumpet sounding on the fall, the death of the world we know. The selection of stories doesn’t quite fit this neat categorization (the second story in part 2 is long post-apocalyptic), which suggests that my interpretation may be trying too hard to simplify what is in fact a polysemous structure, but there is nonetheless a broad progression from the personal, via the fall of civilization, to the utterly cataclysmic.

The volume opens with a very personal story, James Bennett’s “Antichristine,” which could almost be a YA piece, about an abused high school girl who is flagged by teachers as a trouble-maker, but when she’s not being bullied by other children she may as well be invisible to everyone. The ending is a slightly predictable “no one is what they seem” dénouement, but Bennett’s writing is persuasive, moving and convincing, and this is certainly the best story in the first part.

“Skin” by James Oswald is a similarly private “end of the world,” a teenage girl selkie story, dark with shadows of loss and abuse, and with an engaging but expected ending. Much more unexpected is Catherine Hill’s “The End of the Garden,” in which sentient cuddly animal toys creepily disappear one by one from the world they share, a world ruled by a little girl who seems to be growing up—not a new idea, of course, but a charmingly quirky and unexpected story in the context of this apocalyptic volume.

The second part, as well as the longest, is the richest in outstanding quality stories. This section includes “A Sailor Girl Goes Ashore” by Margrét Hegadóttir, an almost cosy piece in a post-apocalyptic setting, in which a lone pirate and scavenger goes ashore in a spookily abandonned city in search of supplies, and makes friends with a local girl and a dog. In some ways not very much happens in this story, but it is quietly effective, and there is a full arc of character development and the rebirth of hope, along with genuine dangers, tension and action; more stories of the quality and skill of Helgadóttir’s would have gone a long way to strengthen the anthology as a whole. R.J. Booth’s “Blueprint for Red Wings” is another explicitly post-apocalyptic story in this second part, in which a girl leaves the only world she knows, an inhabited valley around an ancient rocket silo, to find the rest of the world. It’s a perfect tale of a girl who is so lonely surrounded by people she knows, that she would rather leave and be alone than stick around.

“The Glacier’s Stone, the Mammoth’s Ivory” by Alexander Danner is also a charming story, a Machine of Death-esque scenario, with a group of fearless “enders” (people who know that their deaths will not come until the end of the world) on an adventure trek to a wild glacier. Dayna Ingram’s “Little Daughter” is a very nice twist on the princess with the golden touch story, a fairy tale with wicked kings and fae witches, but it feels incomplete. Not so the harrowing “Demon Runner” by Dash Cooray, an anti-colonial, Sri Lankan steampunk pitting factory-enhanced rebels against British occupiers; no punches are pulled in this dark and unpleasant story, which ends not so much without hope as without forgiveness or compromise. It’s a fantastic setting I could stand to read more about.

The final part, the fully apocalyptic world full of zombie and other demon outbreaks, plagues and religious wars, is dominated by what is probably the least typical story in the section, J.M. Perkins’s “In the Absense.” In this understated but moving piece, the world is disappearing piece by piece, as things (objects, categories, concepts, animals, even colors) disappear one by one, both from the world and from most people’s memories. As reality closes up around lost things, those who remember find themselves slowly going mad, driven to drink or other coping mechanisms. Absurdist in its construction, this is another good example of a story strong enough to hold its own with the best stories in the anthology.

“Somebody to Play With” by G. Clark Hellery is another quirky story, narrated by a cutesy animatronic doll trying to make sense of the dead people, including children, who won’t play with her as she wanders a disease-ridden supermarket. The balance of cute characterization and grim setting is an effective, if not entirely new technique. Perhaps less original is A. Rodenberger’s “Only So Far,” a surreal, beautiful, poetic, absurd, grotesque, internally inconsistent and confused stream-of-consciousness story that romps unapologetically from ecopocalypse and disease, through every cliché in the book, to a world ending in fire and water seemingly all at once.

There are many other stories in this volume, plus the two poems sort of tacked on at the end, including a few that frankly baffled me, and a couple that (perhaps due to my own failure to understand what they thought they were doing) I found a bit offensive. I don’t think much is to be gained in focusing on the negative in this case, because there are lovely stories here: some great ones I have listed above, others that by no means disgrace themselves, a few that perhaps needed a polish before being quite ready for the prime time, or that fit the theme less well than they might, but worked perfectly well on their own terms. An overview and detailed critique of the theme would probably have to take into account both volumes (I may comment below after reading the second book, some day), and in any case I have already indicated above that I probably misunderstand the editor’s intent with the three numbered parts of this volume.

Anyone who has edited a fiction anthology will have at one time or another had the thought, “If only I could publish twice as many stories!” This double-sized anthology suggests to me that it may be for the best we usually cannot. While only a few of the stories in this first volume are truly excellent, many of them are perfectly good, and the gems are worth rooting around for. Exciting works like this do seem to keep coming out of Fox Spirit Books, and I for one continue to look forward to them.
Posted by Djibril at 16:20

I have been meaning to read more short stories and what could be better than stories about the end of the world. It's such an excellent premise, already, I wonder what made them focus specifically on female protagonists (not that I am complaining).
What, though, is the most parochial American perspective?

This is the first time someone has reviewed my work, even if it is a couple of sentences long I would like to thank you!